Antler snails of the genus Clithon as well as snails of the genus Neritina and Vittina are often used as algae eaters in aquariums and especially in aquascapes and plant aquariums, also because they do not reproduce in the aquarium. Both snail types are similarly popular in aquaristics, but each species has its own special characteristics. We will introduce these aquatic snails in more detail below

Antler snails in the aquarium 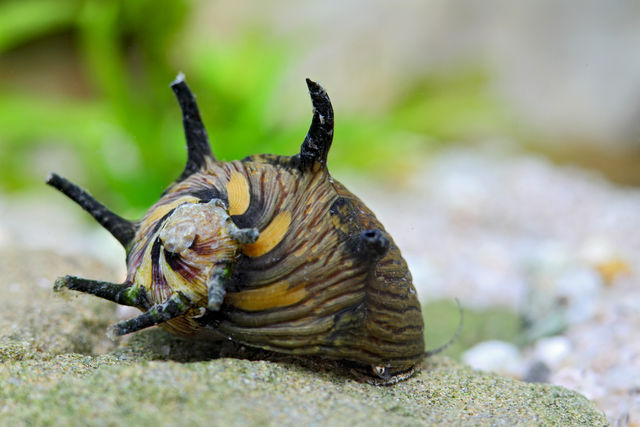 A snail of the genus Clithon with easily recognizable "antlers". Copyright by Chris Lukhaup.

Antler snails are extremely useful algae eaters in the aquarium, which can very effectively destroy algae deposits such as diatoms, green spot algae, dust algae and other green algae deposits. In case of a strong algae infestation, clear feeding traces can be seen on the aquarium glass, on the technique and decoration. Snails of the genus Clithon are among the most effective algae eaters for a freshwater aquarium. In addition, they do not grow very large (approx. 2 cm) and can therefore also be kept well in nano aquariums. Typical for antler snails are, as their name suggests, the small "antlers" which protrude from the snail shell. These are small, harmless thorn-like limestone projections. In the wild, they may be used to protect the snail from predators. When they grow in the aquarium, these appendages are no longer formed, and there are also antler snails, which by nature have no appendages at all. If the tips break off during transport, this is also no cause for concern. The snail does not feel anything of it, since these calcareous appendages on the shell are not interspersed with nerves. Antler snails are also quite appealing in color, sporting very different colours and patterns, starting with subtle brown or red tones up to pretty yellow/black ringed patterns. Clithon-Snails also have a lid with which they can close their shell tightly and securely to protect themselves from possible dangers, the so-called Operculum. Even a socialization with pea pufferfish is possible. 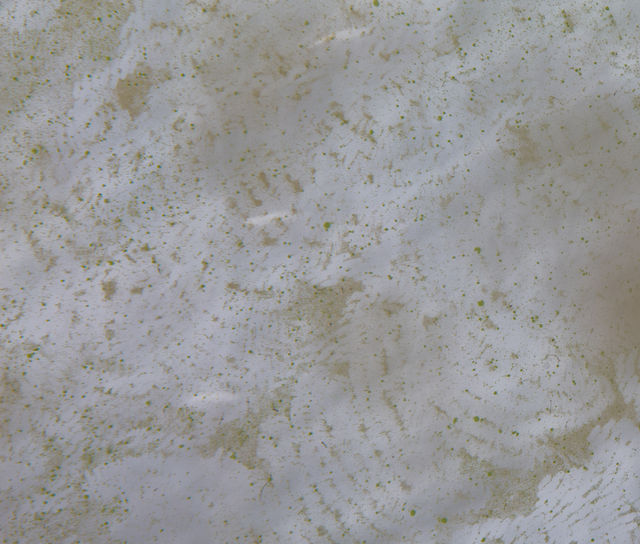 Feeding traces of Clithons or antler snails on the aquarium glass.

For an effective "cleaning staff" in the aquarium, it is recommended to use one specimen for about 10 litres of aquarium volume. Then there will be enough biofilms in the aquarium to prevent the snails from starving to death. If you want to do something good for your animals or have to nourish weak antler snails, you should feed them supplementary: appropriately prepared algae stones are ideal. For this purpose, a porridge of spirulina powder and water is slathered on flat stones and left to dry overnight. After the drying phase, the algae stone can now be placed in the aquarium for grazing. In addition to algae stones, dried Hokkaido pumpkin and green dried walnut leaves are also eaten. As a rule, antler snails do not eat artificial food.
Unfortunately, the antler snails which can be bought in the trade are always imports which often arrive very stressed by the transport. If these animals had to remain in a very densely populated dealer basin, the snails haven't had enough to eat over a longer period of time and are weakened accordingly. In this respect, antler snails are sometimes a little fragile and sensitive, especially during the settling-in period after the new purchase. Clithon-Snails are also partly sensitive to very high CO2-concentrations in the aquarium water. The aquarist should take this into consideration, especially in the early days. Once the animals have settled in, however, the population is stable and provides for a clearly algae-free aquarium with clean panes, stones and wood. Also otherwise, these animals behave rather inconspicuously and don't cause any problems.
Especially in plant aquariums and aquascapes where soil is used and therefore a low total- and carbonate hardness is present, some caution is required. If the water parameters are too unfavourable (very soft and acidic), the snails may suffer damage to their shells, resulting in a lower life expectancy. The remedy here is to adjust the water values so that the invertebrates have a sufficient supply of lime to build up their shells.

Antler snails are not reproductive in a freshwater aquarium. For larvae to survive, brackish/saltwater is necessary. In aquaristics, breeding has not yet been successful. The fact that the animals do not reproduce can be seen as both a disadvantage and an advantage. On the one hand a snail plague is outside the range of possibilities, but on the other hand one is forced to buy new (import) animals in case of a loss. Nevertheless, from time to time female water snails of the genus Clithon will deposit whitish egg cocoons inside the aquarium, from which no young snails will develop. These tiny eggs have an elongated shape, are very hard, firmly attached to the ground and otherwise very resistant. It takes a while until they disappear again - often the cocoons are eaten by the snails themselves. Preferably the female Clithons lay their eggs onto objects like the aquarium glass, the tech or stones and driftwood. Where the egg-laying of these snails is concerned, the opinions are a bit divisive. Some aquarists don't have any problems with it, others however are underwhelmed by the aesthetics of it all. On the glass panes, for example, they can be easily scraped off with a sharp blade cleaner, on uneven surfaces the removal is much more difficult. 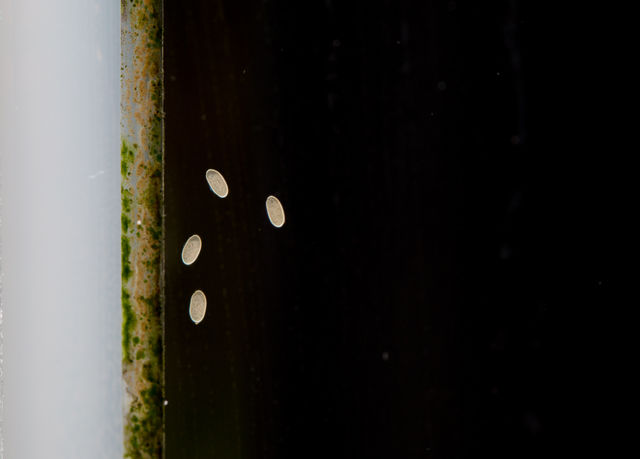 Typical egg clutches in the close-up. 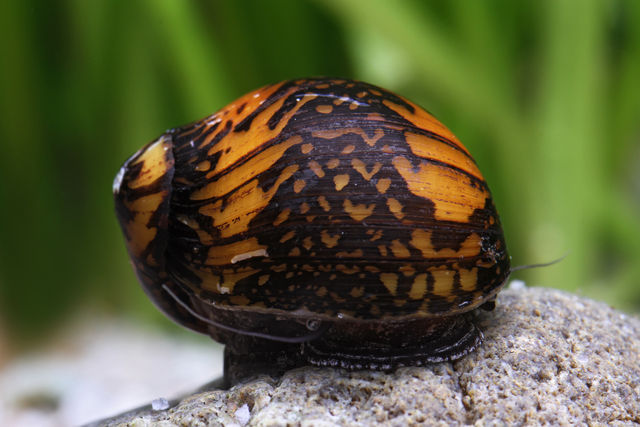 The Neritina respectively Vittina genera have quite similar characteristics and requirements in regards of keeping conditions as the smaller antler snails. They also feed on biofilms and are therefore excellent algae eaters in the aquarium when it comes to algae coatings. Also here the aquarist should pay attention to receive well-fed, thriving, vital animals.
Neritina/Vittina have no "antlers" and are available in many different color variations. There are also some very pretty ornaments on the shell.
Compared to antler snails, Nerites are much larger, not only in total length (up to 3.5 cm), but also in circumference. Measured against the dimensions of a nano aquarium, these snails come across as true "juggernauts". They should therefore not be kept in aquariums that are too small. Furthermore, some species like the Neritina pulligera have the unfortunate habit of crawling along the aquarium glass just below the substrate and digging there. Lovingly placed plants and decoration such as small stones are jumbled or even excavated, and the loving design of the Aquascaper is thereby nullified. In this respect, the much smaller antler snails are much more pleasant guests in an aquascape, although the larger Nerites are the more efficient destroyers of algae deposits. 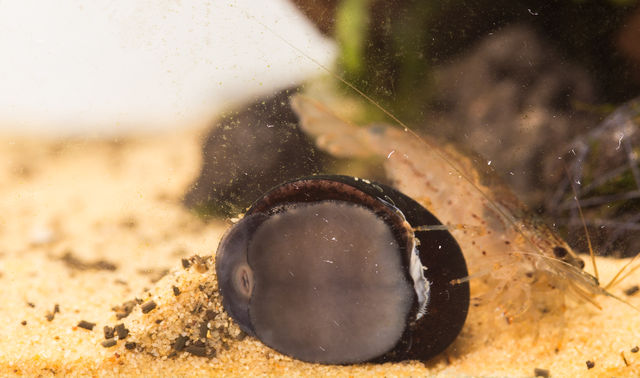 A nerite digging close to the substrate.

Female Nerites also deposit hard cocoons on objects in the aquarium, from which - for the same reasons as with antler-snails - no young will hatch. In a freshwater aquarium, these animals cannot reproduce. Similar to snails of the genus Clithon, Nerites also have a lid with which they can close their snail shell firmly and securely.

Compared to antler snails, Nerites are much more robust and less sensitive, for example with regard to the CO2 concentration in the aquarium water. Their tendency for shell damage also appears to be somewhat lower. In sum, Nerites are therefore to be regarded as somewhat easier to care for than Clithons.