In order to get answers to basic questions all around algae in the aquarium, we recommend you read this article first.

In aquaria we can find different sorts of green algae coats, and in the aquarium hobby they have been given various names, like spot algae, glass algae or dust algae. These popular names are by no means scientific or species-specific, and these coats have been known to consist of various green algae species. However, aquarium hobbyists usually talk about 'dust algae' when said green coat can be wiped off the aquarium glass with a finger; it can sometimes even be removed if water is swished on it. It's like a layer of loose dust.
Recently, the users of the aquatic plant forum flowgrow.de have coined the term "green glass pest" for an especially stubborn population of dust algae. In the English-speaking world, these algae are often abbreviated as GDA (Green Dust Algae).
After the somewhat slimy, loose layers have been removed, they tend to settle on other surfaces in the tank (often on the glass, but sometimes even on the water surface) very shortly afterwards, usually within a few hours or days. These coats consist of microscopical algae whose species has not been identified yet. They only bond to surfaces very loosely and they are able to actively move in the water.
Other green algae coats, which attach to the substrate more or less firmly, do not populate the glass and the decoration that quickly. Especially the classic spot algae are much harder and much more difficult to remove than green dust algae. 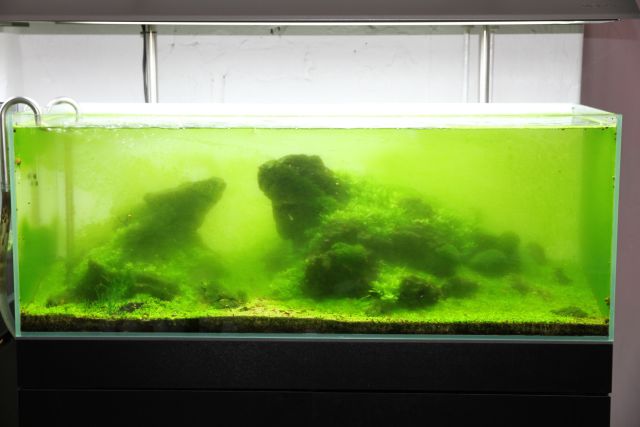 Apparently, a massive appearance of this algae is caused by radical changes in an aquascape or planted tank, like for example drastic changes in the light, the technical equipment or the plant mass (e.g. after a severe trimming session). Some aquarium keepers have made the experience that large nitrogen peaks, caused by magnesium nitrate or urea, can trigger a GDA infestation. Please make sure you change water on a regular basis (at least 50% of the tank volume per week), not only to add fresh water but to prevent nutrients from accumulating. > 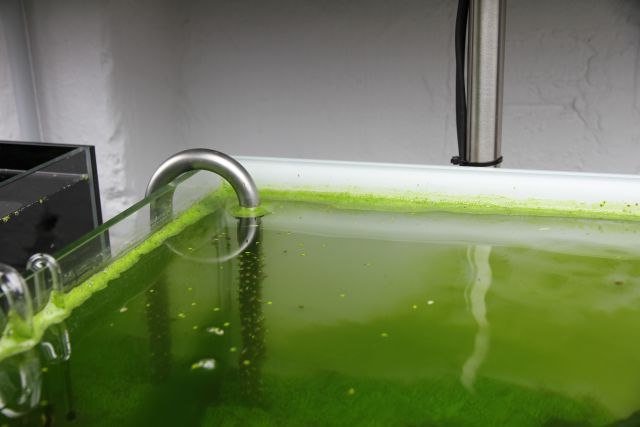 It is also important to adapt the amount of nutrients to the actual requirements of your aquarium plants. Especially when it comes to carbon (supplied through CO2) and macronutrients (NPK), imbalances in the nutrient supply may cause algae growth. In the following list you can find the favorable values for the individual nutritional elements:

If you have a problem with green dust algae you should try just sitting it out. Do not remove the algae layers but wait at least three to four weeks without doing anything. As a rule, the life cycle of these algae is over then, and the coats get incoherent. Algivores like some snail species and suckermouth plecs will eat them. 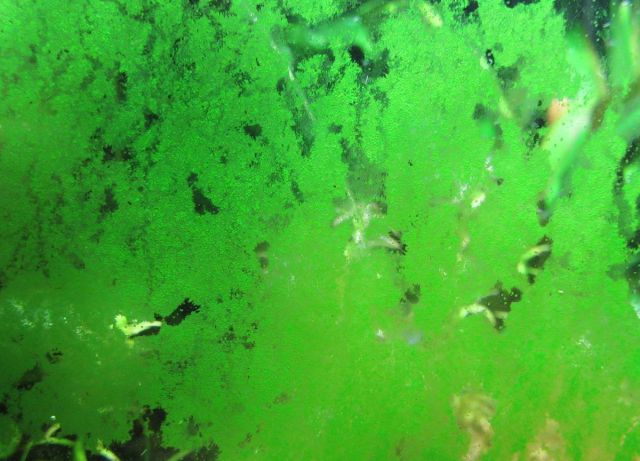 Alternatively, you can lower the water level in your tank as far as possible after the life cycle of the algae has ended and then wipe the remains of the algae off the glass. Do not remove the coat during the waiting period of three to four weeks, as the algae will release spores which start a new life cycle as soon as they settle.

A more radical measure would be a complete treatment of the aquarium with hydrogen peroxide. You can find an exact description of this method here.