Shrimp have become an indispensable part of the aquarium hobby and especially of the planted tank hobby. These little colorful critters are not just beautiful to look at and their intense colors add some variety and little splashes of contrast to the aquarium, and they are also quite useful: by taking care of food left over by the fish, these little scavengers provide for better water quality and less organic pollution. Furthermore, in an aquarium as well as in their natural biotopes, shrimp munch on dead plant parts, muck, freshly dead fish and inverts, but also carrion and even fish poop. Fish don't utilize nutrients very efficiently, and therefore, their droppings are still quite nutritious. If the shrimp don't feed on them they would serve as food for (unwanted) snails and algae. 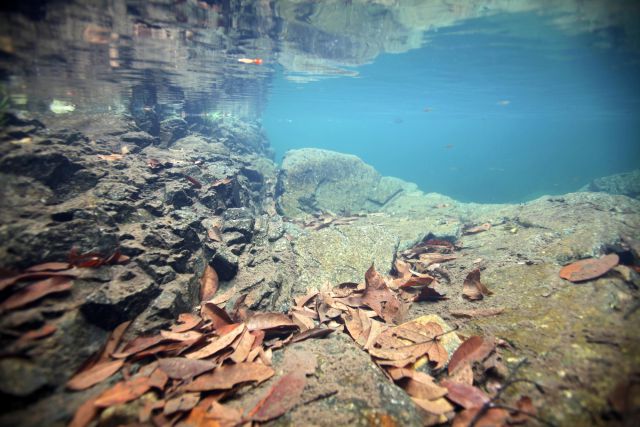 A biotope where dwarf shrimp (Caridina cantonensis) live, with brown leaves at the bottom. - Copyright by Chris Lukhaup

Shrimp also graze for hours on algae films and microbial biofilms. If you take a closer look at their mandibles and especially their tiny claws, you'll see that they are covered with strong bristles, which are ideal for scratching aufwuchs growth off of stones and other surfaces. 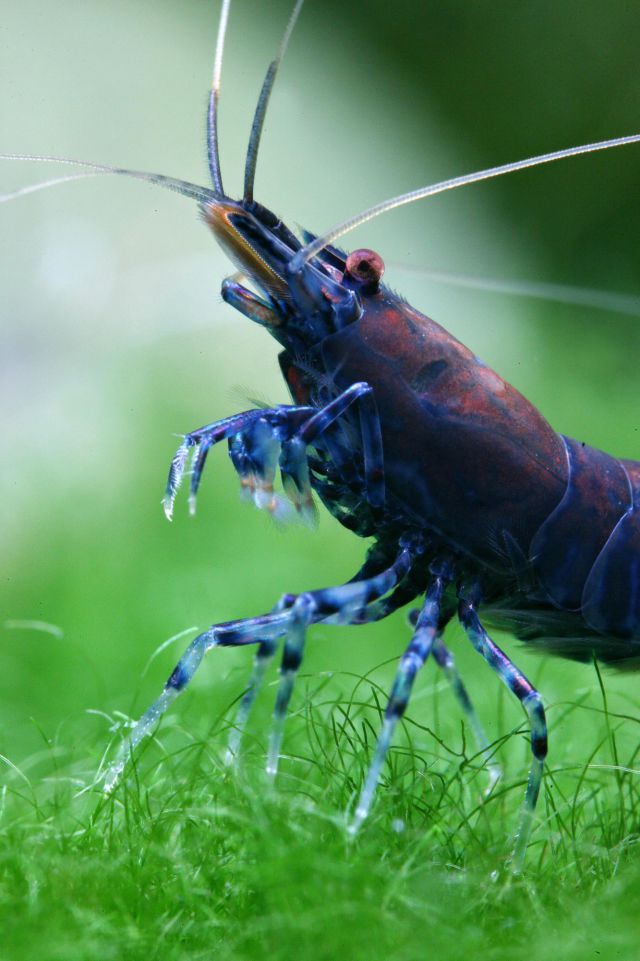 A small group of 10-20 shrimp in a community aquarium well-stocked with fish, which are regularly fed with high-quality food, needs virtually no supplementary feed. They will feed on the leftovers that the fish don't eat. If you want to make absolutely sure your small crustaceans get everything they need, simply add brown dry autumn leaves from a deciduous tree to the aquarium. Tried-and-tested classics are for example beech, oak, hornbeam and so on. The foliage should be absolutely brown and, above all, it needs to be completely dry. Although yellow, red and green leaves may look more ornamental, they still contain traces of sugars that the tree has produced during photosynthesis, and are therefore not suitable as staple food in the aquarium. Dwarf shrimp mainly feed on fallen leaves in their natural habitats, too, by the way.

Just add one or two crispy-dry brown autumn leaves per ten liters of aquarium water. If you want them to be in a specific place, or to sink immediately, just boil them over with boiling water. When you throw them into the aquarium as they are, the leaves will float at the surface for a few hours to even days until they are eventually soaked and sink. Other than that, not boiling them over before adding them to the aquarium has no disadvantages. 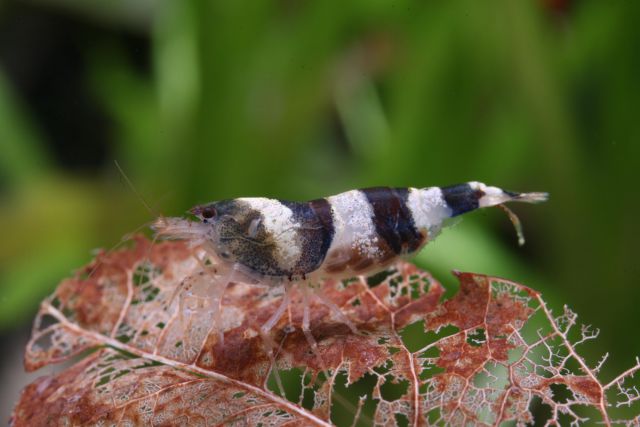 If you want to collect your own leaves and make sure theres nothing on them that doesn't belong into an aquarium (e.g. animal poop), just bring along a cloth bag to your next hike in the woods and collect the brown leaves fresh off the tree.

If theres more shrimp in your tank, theyll need additional feeding. The best way to go here is to have a look at what they usually eat in nature. This includes the leaves we've already mentioned, which can be found in nature in larger quantities in most shrimp habitats, but also food of vegetable origin. Shrimp like green food such as spinach and nettles, and vegetables such as kuri squash or zucchini are also suitable for feeding shrimp. Besides vegetable food, shrimp also need a certain amount of protein to keep them from assaulting younger or weaker conspecifics. Suitable protein suppliers are, for example, brine shrimp (Artemia) or mosquito larvae, you can serve those as frozen or freeze-dried food.

Theres quite a lot of ready-to-use shrimp food available. A suitable main food can be recognized quite easily: it doesn't only contain vegetable ingredients but also an amount of protein. You should always make sure that the protein comes from sources that would normally be available to the shrimp out in the wild. Usually, cows do not tend to fall into rivers to be devoured by ornamental shrimp ... but insect larvae, insects that have fallen into the water, sometimes a dead conspecific or two and maybe even a dead fish are rather common and get eaten. The biofilms shrimp graze on are rich in protein, too, due to a high amount of bacteria living in them. 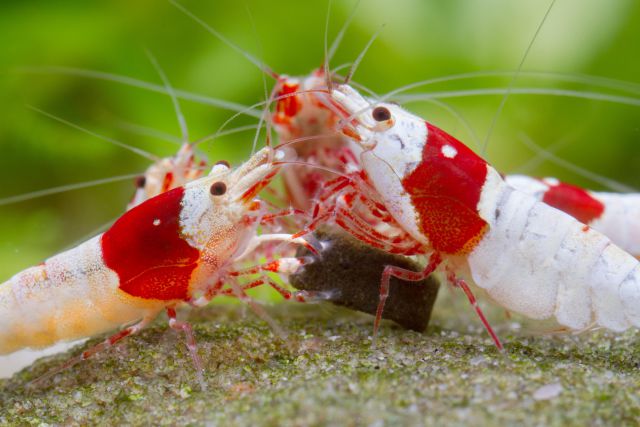 Two to three times a week, especially Caridina shrimp such as Bee Shrimp, Tiger Shrimp and Amano Shrimp should be given an additional high-protein supplementary food besides their regular main food. Powdered baby shrimp food spreads nicely in the aquarium, so all the tiny baby shrimp get their share. Mineral food supplies the animals with important nutrients and - obviously - minerals they need to build their shell. This, too, is given once or twice a week.

To prevent too much food from ending up in the substrate, many shrimpkeepers feed their shrimp using glass dishes. You can look up in our wiki article how to do it.