Choosing the right catfish for your planted tank

Tropical catfish are very popular ornamental fish for freshwater aquariums. Since many catfish species are herbivores, not all of them are recommendable for planted tanks. In the following we have compiled a list of species that are suitable for planted tanks. We have placed emphasis on plant compatibility as well as on a certain congruence in water parameters. Like most of the common aquarium plants, the following catfish prefer soft, acidic water.

The genus Corydoras is comprised of around 150 types of cories, which are predominantly native to South America. These popular aquarium fish are very peaceful and sociable animals that should be kept in a group. Cories, or armored catfish, are ground dwellers. Since they are bottom feeders that like to dabble in the substrate, it should be fine-grained, with round particles, in at least a few places. Stones, driftwood and big-leaved aquatic plants serve the fish as hiding- and resting spots. South American tetras or dwarf cichlids are especially suitable company for cories. Armored catfish can be easily fed with sinking food, such as most common flake foods and food tablets. Frozen fish food and live food are a welcome variety in their diet. Pleas note that cories arent herbivores and therefore not suitable as algae killers. 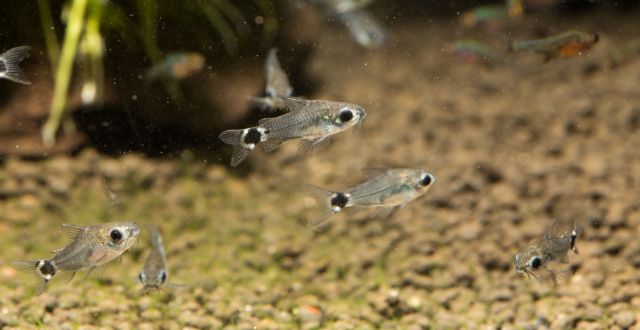 Dwarf Corydodas such as Corydoras pygmaeus or hastatus are very popular for aquascaped tanks or for smaller aquariums. Unlike other cory species these small-scale catfish swim freely and can therefore be used as schooling fish in an aquascape pretty nicely.

Otocinclus are often considered part of the cleaning crew in the aquarium. They graze on biofilms and algae growth growing on decoration, on leaves as well as on the aquarium glass. In this respect they can help keeping the aquarium free of spot algae or other algae films. In trade they are usually sold under the name Otocinclus affinis, but most of the time those fish belong either in the species Otocinclus macrospilus, hoppei or vittatus. True affinis are almost never imported. 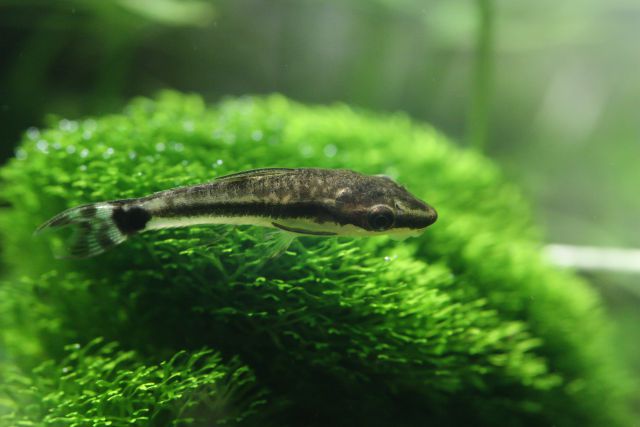 These peaceful fish feel most comfortable in a group and also show tendencies towards schooling behavior - enough swimming space provided. The aquarium should have a volume of at least 54 liters for a small group. Plants and natural decoration such as pieces of driftwood offer sufficient grazing grounds. Nevertheless, additional food such as food chips are very popular as well. The diet for Otocinclus should be balanced and can be supplemented with vegetable food e. g. blanched leaves or peeled, organic vegetables (cucumbers, peppers, carrots).

The suckermouth pleco (Ancistrus dolichopterus) is colloquially referred to as window cleaner. This catfish with the L-number L183 can get pretty big with a length of around 15 cm. Characteristic for the species are the fleshy tentacles on the forehead of the catfish, which are particularly pronounced in the males. 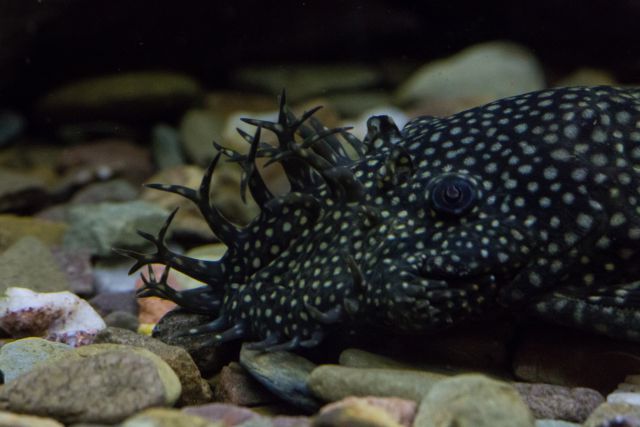 The scraping mouth of this pleco is oriented downwards, which makes this armored catfish a typical algivore. The suckermouth plec rasps off biofilms from hard, even surfaces such as stones, driftwood, leaves, but also the aquarium glass. These activities may damage plant leaves, such as those of the genus Echinodorus. For that reason, plecs can only be recommended for a planted aquarium to a limited extent. In order for their digestion to work properly, plecos need wood: cellulose is required for their intestinal functions, and they take it in by eating wood fibers. Additionally, blanched vegetables or food tabs with a high amount of plant-based ingredients are a great addition to the plecos' diet.

Suckermouth plecs are notorious for their high reproduction rates. If you dont have room for all the offspring, you might want to consider keeping just one fish, or only same-sex groups. 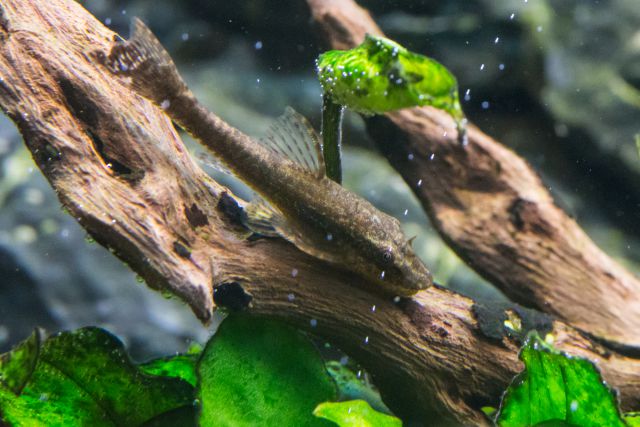 The LG2, also known as Otocinclus negros sp. "Paraguay", unfortunately isnt available in trade that often. Unlike the much more widely available Otocinclus affinis, it is possible to breed the LG2 at home. These small-size Otocinclus with about 4 cm in length enjoy living in groups. The aquarium should have at least a size of 54 liters, and a moderate temperature not below 24 degrees is recommended. These catfish typically feed by grazing on biofilms, but they will also eat dead plant parts and foods of animal origin, such as live food. Otocinclus negros sp. "Paraguay" are nocturnals that need a place to rest during the day. They like hanging from driftwood or big leaves, head down. 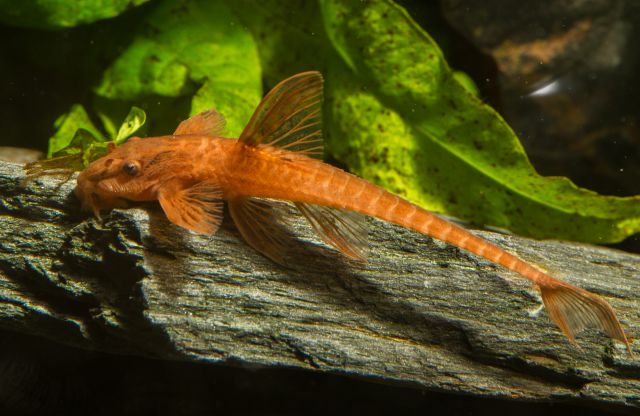 In trade, whiptail catfish is usually a collective term for catfish of the genus Rineloricaria. Their color varies from red over brown to grey. Various types are available in trade, such as Rineloricaria lanceolata or R. fallax. Whiptail catfish get a little bigger (up to 15 cm), therefore they require an aquarium with a higher volume of at least 200 liters. a href="https://www.aquasabi.com/aquascaping/substrate/sand-und-gravel/">Sand is a perfect aquarium substrate for whiptail catfish since the fish habitually chew it in search of food. They are mostly bottom-dwellers and need many hiding places e. g. oblong decoration (like tubes), aquatic plants and driftwood. In most species, the sexes are pretty easy to distinguish: Male whiptail catfish have "whiskers". Keeping these catfish in couples in an aquarium is recommended. In a group, violent fighting can occur among males. Socialization with other ornamental fish- which shouldnt be bottom-dwellers - is possible and unproblematic.

Like many catfish species, whiptail catfish mainly feed on biofilms on the surface of plants, stones and wood. In addition, vegetal food in the form of blanched organic vegetables is often accepted, but they also like to eat live and frozen food and food tablets.