Let's start with A: Daily Maintance

Keeping the Natureaquarium in shape!

The substrate of a Nature Aquarium is rich in nitrogen and organic nutrients. These compounds are eventually decomposed by substrate bacteria into a form absorbable by aquatic plants. However, during the initial stage of an aquarium when beneficial bacteria are not adequately present, an excessive amount of nitrogen and organic compounds leach into the aquarium water and may cause the problems including cloudy and colored water. To remove these compounds, approximately one-third of the aquarium water should be changed daily in the first week and every two to three days from the second week onwards. Subsequently, after one month has passed, approximately one-third of the aquarium water should be changed basically once a week. In the event of algae bloom, an emergency water change may be performed. 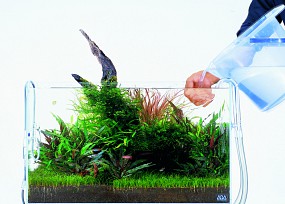 Frequency of water change is reduced as the water quality stabilizes. 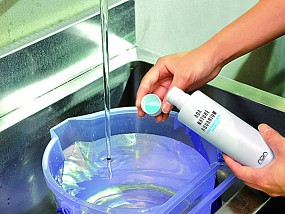 Algae that grow within an aquarium are the worst enemies of a beautiful appearance of your aquascapes. Since there is a limit on manual removal of algae, it is also a good idea to utilize animals that feed on algae. Caridina japonica is a representative algae eater. However, this shrimp doesn´t eat some algae species and at the same time, an excessive amount of this shrimp added to the aquarium may cause damage to aquatic plants, eaten by the shrimps. It is therefore advisable to add 5 to 10 shrimps at a time while observing the condition of the aquarium. Besides, other algae-eating animals such as Otocinclus sp. and Crossocheilus siamensis should also be added to the aquarium on top of Caridina japonica. 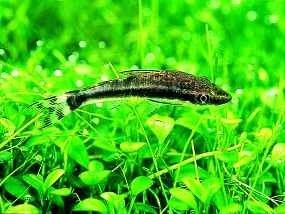 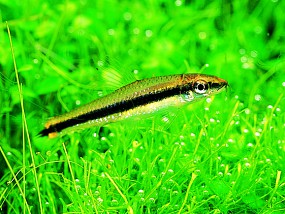 1. Otocinclus sp. eats algae on the surface of glass and aquatic plants.
2. Crossocheilus siamensis is effective for getting rid of beard algae.

Removal of Algae on Glass and Stone Surface

As time progresses, the appearance of aquarium glass is undermined with the growth of algae, no matter how well the aquarium is maintained. You may resolve this problem by cleaning the dirty glass surface with a scraper like ADA Pro Razor and then carrying out water change. Long-maintained aquascapes may experience hard brush algae grown on stones. This type of algae can be eliminated with the help of Crossocheilus siamensis. Stubborn algae may be removed efficiently by scraping it off with ADA Pro Picker and then letting Crossocheilus siamensis eat the remainder. 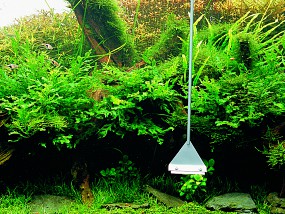 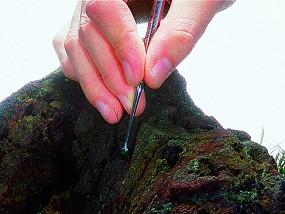 1. Algae on the surface of aquarium glass may easily be scraped off with ADA Pro Razor.
2. Hard brush algae on stones can be removed with ADA Pro Picker.

Effective Use of Phyton Git

ADA Phyton Git containing disinfectant agent is useful in prevention of fern disease and also good for the removal of algae. ADA Phyton Git is an algaecide effective against brush algae that grow on stones, driftwood and hard Anubias leaves in the aquarium. Firstly, drain the aquarium water to expose the affected areas to the air. Then, apply ADA Phyton Git which has been diluted with the same amount of water with a brush. Algae will wither away after a short period of time. 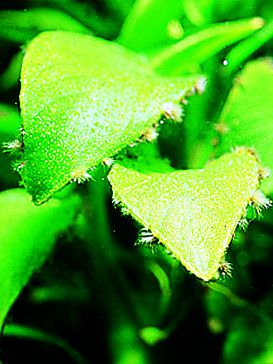 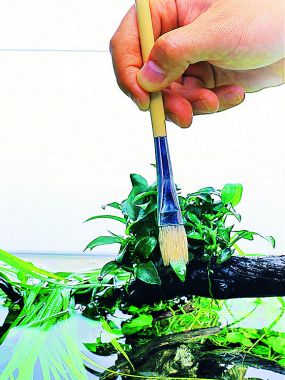 1. Brush algae that grow on green Anubias leaves.
2. Expose the affected areas to the air, and then apply ADA Phyton Git which has been diluted with the same amount of water with a brush.

Nature Aquarium is a hobby to grow aquatic plants, to create an aquascape and maintain it for a long period of time. To enjoy this hobby, the maintenance focusing on the condition of the aquarium is crucial, including water change, removal of algae and trimming/pruning of aquatic plants. This section introduces the key points of aquarium maintenance.

If overgrown stem plants are left untrimmed, they may overhang along the water line and the aquascape may look untidy. Besides, overhung leaves block the light and the bottom side of the stem may get weak. To maintain stem plants in healthy condition, it is important to trim the plants once their terminal buds reach the water line. During the first trimming, stem plants should be cut at the lowest position possible and subsequently from the second trimming onwards, the cut position should be shifted to upper side. Doing this promotes the broomlike branching out of the stems and stimulates the plants to produce dense leaves, which eventually helps form appealing clumps of stem plants. 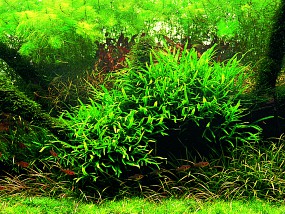 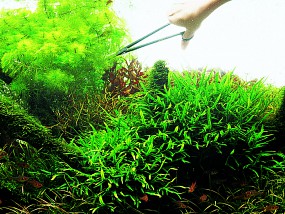 
Foreground plants such as Glossostigma elatinoides spread by extending their runners. Over time, these plants become thick with grown runners and leaves stacked on top of each other. Thick foreground plants should be pruned by trimming only the top surface and leaving the bottom side untrimmed. A pair of scissors with curved blades such as ADA Pro-Scissors Short Curve type is perfect for the pruning of foreground plants. 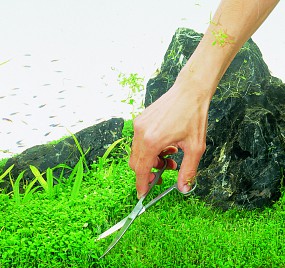 Source and Copyright of the article/photos - Aqua Design Amano - ADA