Sludge in your aquarium

Usually, most inexperienced aquarium keepers regard sludge or muck as dirt, and thus as a "harmful substance". That's not quite true though! In the following we will explain all that's important about sludge.

What is sludge, or muck?

Sludge or muck are the names for a brown, rather flaky substance that collects on the substrate inside the aquarium after some time. However, it can also be found inside the filter, but there it is referred to as filter sludge. Sludge basically consists of degrading biomass. It may contain dead plant parts, but also leftovers and excrements of the aquarium fish and invertebrates. These organic materials are processed and systematically broken down by a great variety of microorganisms. From tiny snails, worms and unicellular organisms to fungi and bacteria - life is teeming in the muck! These different creatures are extremely important to the aquarium's ecosystem, as they shred organic waste and contribute to the degradation of pollutants. These organisms include, among others, the nitrifying bacteria, which are involved in the nitrogen cycle, in the course of which they oxidize ammonium to nitrite and nitrite to nitrate. For this very reason, "second-hand sludge from an aquarium that has been running for a while already - i. e. from an ecologically established aquarium - is frequently used to inoculate a new setup with microorganisms.

There are various connections between sludge and aquatic plants. The roots anchored in the substrate supply oxygen to the microorganisms living in the sludge which they need to break down their food. On the other hand, the humic complexes found in the sludge act as chelators: they bind to minerals. If the sludge is decomposed further, the minerals are released and become available to the plants again. Basically we could say that sludge serves as a buffer for nutrients. 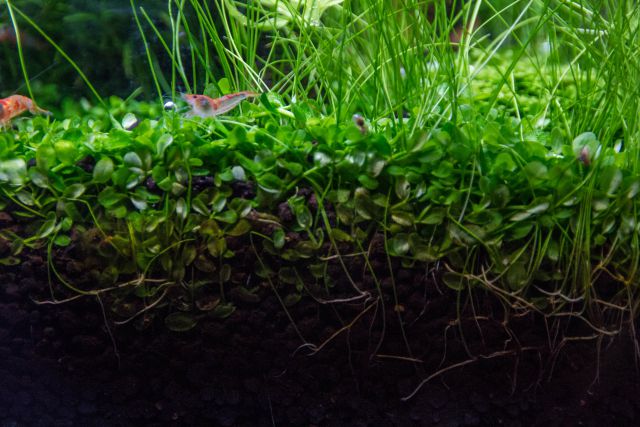 In fact, there are quite a few arguments that speak in favor of sludge since is important for the ecosystem in the aquarium and therefore should not be removed. In a well-balanced system (after the cycling phase), usually more or less the same amount of sludge is present in the tank no matter when you look. When this is the case, you needn't muck your aquarium regularly. On the contrary, extracting sludge would disturb the aquariums microbiology and equate to a reboot of the ecosystem. If you still want to muck your tank anyway, remove only a part of the sludge for the reasons mentioned above.

When we define sludge as a living part of the ecosystem, it is consequently important that there are the living conditions in the muck are good for the organisms living therein. Above all, the bacteria in the sludge need oxygen for their metabolic processes. Therefore, as an aquarium owner, you should make sure that an adequate oxygen supply is guaranteed. This includes a sufficiently strong current and the presence of aquatic plants. Compacting the substrate should be prevented. Otherwise, dead zones may form in the soil, and there is a risk of fouling. Fouling indicates that the microbiology in the aquarium becomes eutrophic. In its wake, aerobic bacteria, which need oxygen, die off in large quantities, and bacteria begin to multiply that produce sulfur gases due to their anaerobic lifestyle. This can get very dangerous for the aquariums inhabitants. In that case you need to remove all rotting and foul parts of the substrate and the compacted organic mass as soon and thoroughly as possible, and of course you need to finde the reason why oxygen has become deficient.

If too much sludge seeps into the soil, densification can be the result.

Especially in systems that are overstocked and fed strongly in accordance, significantly more sludge can form over time, often accompanied by increasing levels of nitrate and phosphate in the water. If the water pollution is too heavy, organic waste can no longer be adequately processed by the ecosystem in the aquarium, and an imbalance will follow. The ever-growing mass of sludge will continue to compress the substrate, which will lead to rotting, dead zones in the tank and the formation of noxious gases mentioned above. This is the moment when you as an aquarium keeper come in - it is high time to step in and support the ecosystem. Regular water changes help reduce the water pollution, and a resolute reduction of the sludge cover prevents the formation of rotting spots in the ground. Furthermore, you should do your research on the possible causes and change or reduce your feeding regime as well as improve the filter performance in the aquarium.

There are several ways to remove sludge from the aquarium. Sludge can easily be extracted with a length of hose. As a practical characteristic, sludge usually accumulates in very specific places in the aquarium: in low-flow zones. Mostly these are located in the corners of the tank, where the muck particles can settle well. If neither the filtration nor the current are changed, the position of the sludge corners wont change either.

If burrowing or bottom-feeding aquarium inhabitants have worked the sludge too deeply into the substrate, syphon cleaners can help you greatly cleaning the substrate. Through the bell-shaped syphon only light particles are sucked in, while the heavier substrate grains sink back to the ground. In this way, the least possible amount of sand, gravel or soil is removed during the cleaning process.

Another possibility would be the use of sludge-reducing agents such as gravel and substrate cleaners. Most of these agents are bacterial preparations, which help break down the organic material that has accumulated. In addition, the water quality will improve, and the water will become much clearer.