Preparations for the final shot

The road to the perfect picture

The so-called Final Shot has developed into a real photo production for the presentation of an aquarium layout. These pictures are typically used to participate in international aquascaping competitions, such as the IAPLC or the AGA Contest. On the road to the perfect photo, there are various preparatory measures, which we present here in more detail. We have already featured basic infos on the topic of aquarium photography in the articles: "How to shoot an aquarium: part 1" and "part 2".

At the time of the final shot, the plants should not only look vital, but should also stand in formation as ideal as possible in terms of growth. During the pruning in the weeks before the photo production, the different growth rates of the plant species must be taken into account. The article "Proper timing when trimming" is helpful here. 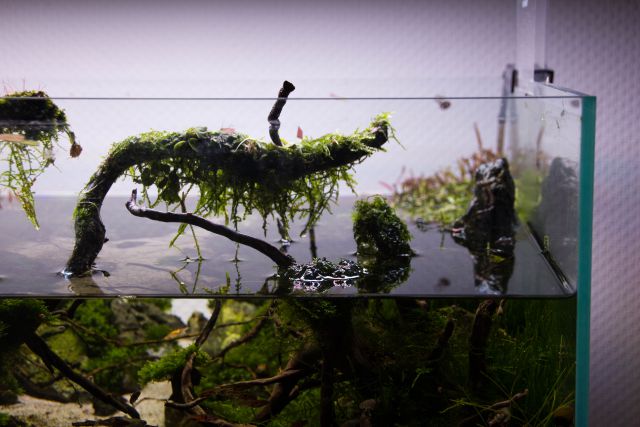 A water change should be done on the day preceding the shooting. It will ensure clearer water and more brilliance. Performing the change immediately before shooting the photo will cause a formation of oxygen bubbles which will disturb the visual impression. The old water is collected in a bucket and reused for the following steps. 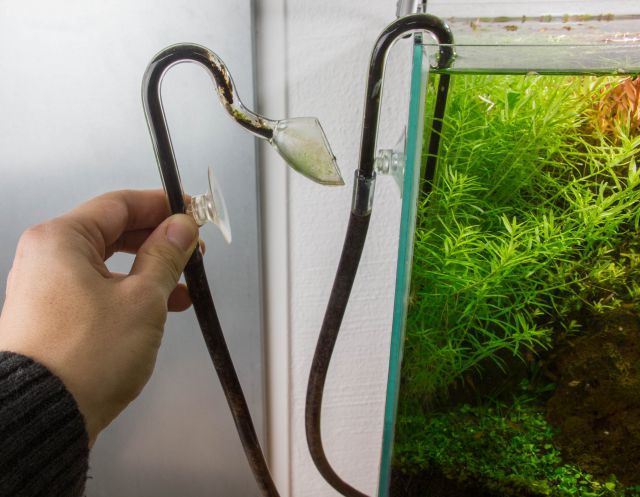 On the day of the final shot, all visible technology should be removed first. These include, in particular, heating rods, thermometers, CO2 accessories and filter in- and outflows. The heater and filter technology is installed in the bucket with backwater for the time of the photo production. So the filter bacteria stay alive, and they have a small habitat with the same water levels as the aquarium. 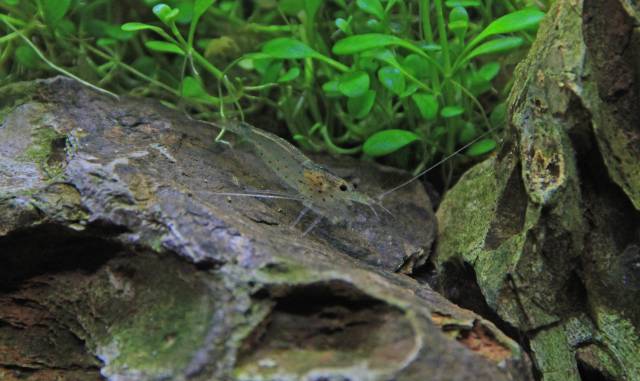 The bucket equipped with heater and filter also serves as a temporary rescue station for animals that we do not want to see in the tank for the final shot. These can be, for example, algivores such as Neritina or staghorn snails, amano shrimp or Otocinclus. 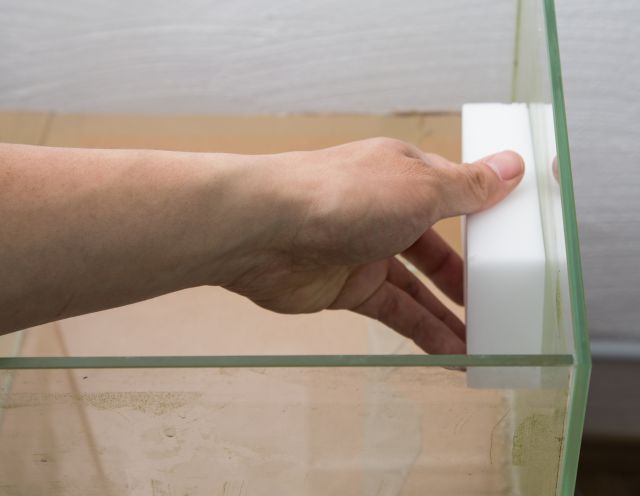 When all technology is removed from the tank, you should thoroughly clean the panes inside and out. Especially in places where technical objects were installed with suction cups, marks can be seen quite often. Exterior cleaning works best with a commercial glass cleaner. The inner surfaces of the panes should be freed from algae coverings and limestone. This is best done using a scraper. For mild algic coverings, the Magic Cleaner Sponges are recommendable. More tips on that can be found in our article "cleaning an aquarium".

If decorative sand zones are used in a layout you should free them from dirt before shooting the pictures. Just like wrongly placed soil granules, sludge and plant remains can be easily syphoned away using a thin hose. If the edge between sand and pane looks dirty, you can specifically syphon off the ground, clean the pane and add new sand.
In addition, this point in time can be used well to incorporate small details in the foreground, the sandy area. For example, placing smaller stone chips. 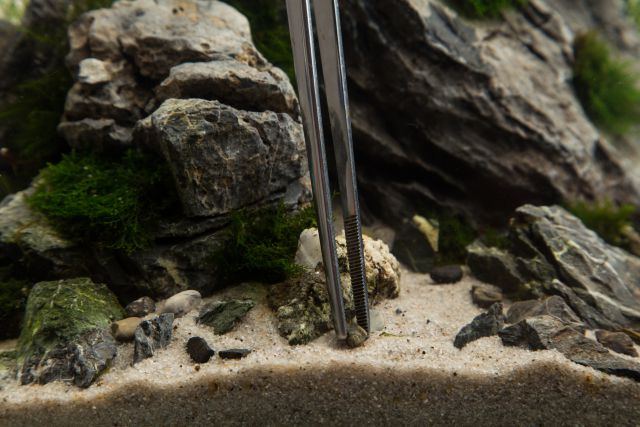 If you look at the daily course of a plant aquarium, there are different phases. At the beginning, the stem-plants in particular will open and extend towards the light. At the end of the lighting phase theyll close again. In addition, especially towards evening, the water is saturated with oxygen, which is produced by photosynthesis, which will make the plants pearl and cause bubbles to rise up. 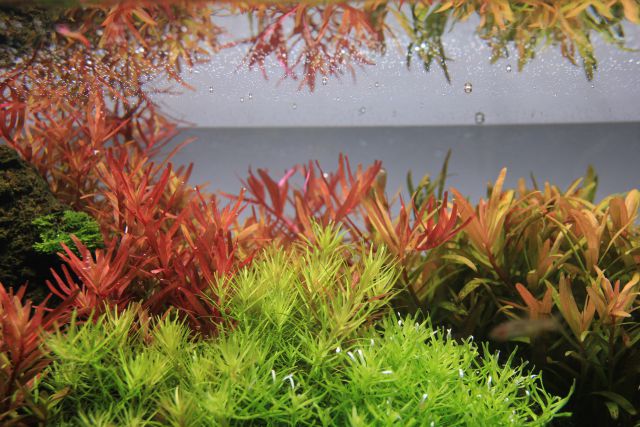 This circumstance may be a hindrance from a pure photographic point of view, since the bubbles are optical interferences. For a final shot it is therefore ideal to do it in the morning, about one to two hours after turning the light on. The plants blossoms will be fully opened and the full oxygen saturation wont be reached yet.

Position of the fish

The fish in the final aquarium layout are an important aspect. Unsurprisingly, species that have a nice flocking behavior are often preferred. Countless pictures are taken of the aquarium until one has found one in which the animals are in the optimal position. Typically, this is a picture of a swarm, with each fish swimming in the same direction. Due to the position and swarm direction, a very targeted dynamic can be achieved in the image composition. Partly the fish are motivated by external influences to take a closed swarm formation, such as by waving your hands in front of the panes.

In order to rule out reflections on the glass due to light effects, there are various measures to be taken. The room is darkened as much as possible. Light surfaces are covered with dark fabrics. The photographer also wears black clothes, sometimes even dark gloves. A wide frame made of black cardboard is placed around the front pane of the aquarium. 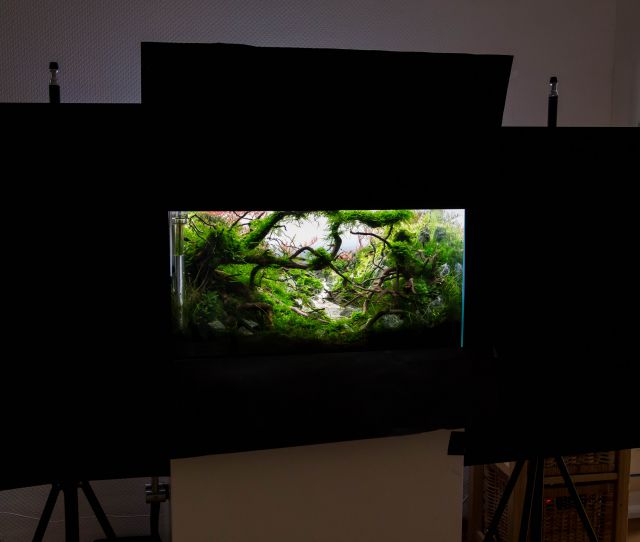 Numerous contest pictures show moving water surfaces with curling wave movements. This effect is achieved by a targeted flow of air to the surface using a small fan or hair dryer, which is positioned laterally or above the aquarium. To capture the movements properly, you should experiment a little with the camera settings. This usually requires a shorter shutter speed. 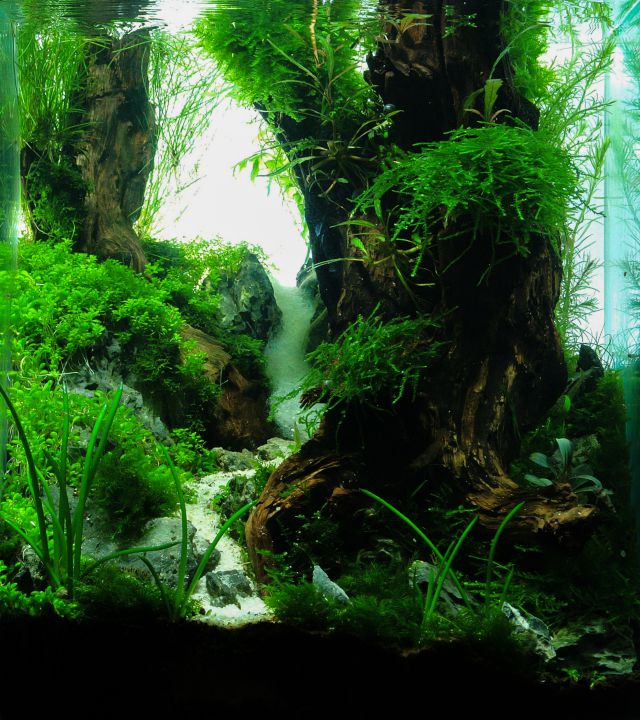 An aquascape with a wavy water surface.