Product presentation of the new substrate

ADA Aqua Soil Amazonia is an optimal substrate for aquatic plants and rich in nutrients like nitrogen compounds traceable as ammonium. For beginners in plant aquaristics, this Aqua Soil could potentially cause problems during the cycling phase of a new aquarium, e.g. when the high nutritional level and the still low plant mass werent in a good ratio. The new Amazonia Light offers the perfect remedy, because it does not contain as many nitrogen compounds (as ammonium), thus ensuring a much more pleasant cycling phase. The organic load is comparably lower in a tank equipped with ADA Aqua Soil Amazonia Light, as well as the traceable phosphorous content in the surrounding water. The reason for this is the use of less black earths during the manufacturing of Amazonia Light, which are especially rich in nutrients and humic substances. This also affects the colouring of the soil, meaning that Amazonia Light comes in a significantly lighter brown than the usual, blackish Aqua Soil Amazonia.

Nevertheless, ADAs new substrate still has more than enough nutrients to ensure a good and healthy growth of your plants. Other active properties such as the pH and KH lowering effect are of course retained.

Clearly visible in comparison: where the pH- and KH lowering effect is similar in both soils, the Aqua Soil Amazonia contains measurably more ammonium (NH4) than Amazonia Light. In return it provides nitrogen in the measurable nitrate form (NO3). Also, the phosphorus content and organic load (measured by the chemical oxygen demand COD) are lower.

In the following experiment, the plant growth in two soil types was compared under otherwise identical conditions over a period of 18 days. The left aquarium contains Amazonia Light, the right one Aqua Soil Amazonia. In the latter, the growth of the plants is noticeably stronger, but it also shows more algae growth in the cycling phase. The plants in the left aquarium grow a little slower in comparison, but very evenly and vitally. In addition, no algae are to be seen. 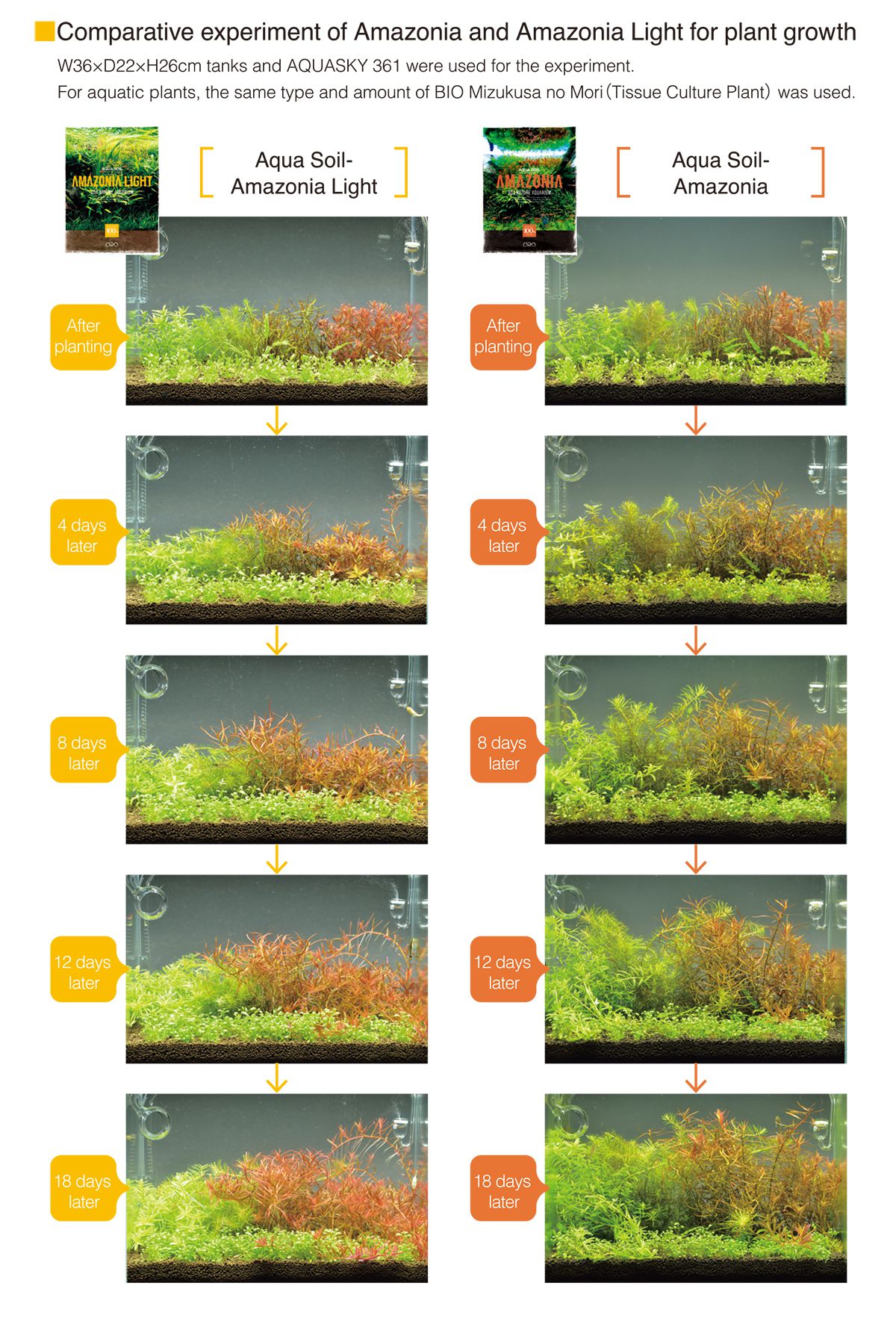 ADA Aqua Soil Amazonia Light is available in 3- or 9-liter-units, as well as in "normal" and "powder" grains. They can be combined with all components of the ADA substrate basic system, like Power Sand.

Source and copyright of the article and pictures: Aqua Design Amano - ADA (except for the header picture)