The solar I in spotlight!

There are two types of lighting system for Nature Aquariums: a suspended pendant type such as ADA Solar I and an install-on-the-tank type such as ADA AQUASKY. First, lets do a research on light distribution of pendant-style lighting.

The lighting system for Nature Aquarium plays the roles of promoting photosynthesis of aquatic plants and enhancing the attractive look of the aquascape. Light intensity and color temperature are significant factors for photosynthesis while the brightness and color rendering properties are important to make the aquascape look attractive. Metal halide lamp and twin fluorescent lamp used for the Solar Series provide sufficient light intensity as well as optimum color temperature and color rendering properties to promote plants photosynthesis. The light housing unit of the Solar series is basically installed away from the water surface. A research was conducted on the light distribution of each model under this series. 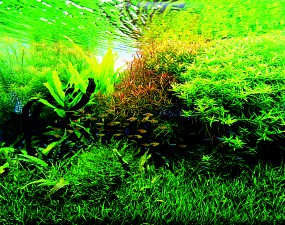 Light distribution of Grand Solar I

Light distribution of Solar I

Metal halide lamp emits particularly strong light. Thus the light intensity, which is immediately below Grand Solar I and ADA Solar I, tends to be very high at the center of the aquarium.


This is the Key Point!

The greater the distance between the lighting system and water surface, the more even the brightness becomes.

It is optimal to install Solar II 10cm away from the water surface of 60cm tank.


Source and Copyright of the article/photos - Aqua Design Amano - ADA