Interview with the AquaOwner

Who's the man behind the Youtuber?

The popular Youtuber AquaOwner is the moniker of young photographer Tobias Gawrisch. Hes been into aquascaping for over seven years and eventually decided to open his own YouTube channel on scaping and everything related in 2016. As AquaOwner, Tobias regularly publishes videos on aquarium design and aquatic plants. Hes already got over 200 videos online and over 20000 followers on YouTube. His videos arent just choke-full of photographic and cinematographic know-how but also profoundly researched, offering valuable content, knowledge and understanding. In the manner on a typical YouTube influencer, even complicated, aquaristic topics are handled with a very no-frills attitude.

Aram Schneider (AS) had the chance to sit down and chat in detail with AquaOwner alias Tobias Gawrisch (TG). Tobias answered very comprehensively and insightful, offering a lot of background info on the guy behind AquaOwner. But read for yourself!

AS: "Since when have you been into acuascaping? Where and what are your roots?"

(TG): "I started my first aquarium (a 30 liter cube) 8 or 9 years ago, when I rented my first own flat. When I was a kid, my parents always used to have an aquarium, too. One of those typical 80cm tanks with 112 liters.
Ive been into aquascaping - in a way that I can legitimately use the term to describe what I am doing - for seven years now and was able to witness the whole development of the trend in Germany pretty well.
The transition happened back then from that 30 liter cube I had gotten from a kindergarten - Spongebob, guppies and catfish included! - via a very long and intense information phase during which I had to learn from square one whats going on inside an aquarium, just to learn that of course everything Id been doing with my cube until then was a complete atrocity and plain wrong (especially the planting).
Aquascaping as a trend or stylistic choice was just then coming up and the precision and perfection of those scaped tanks just took me by storm as a photographer. So it came to be, that my interest in fish gradually faded and I began specializing in aquascaping." 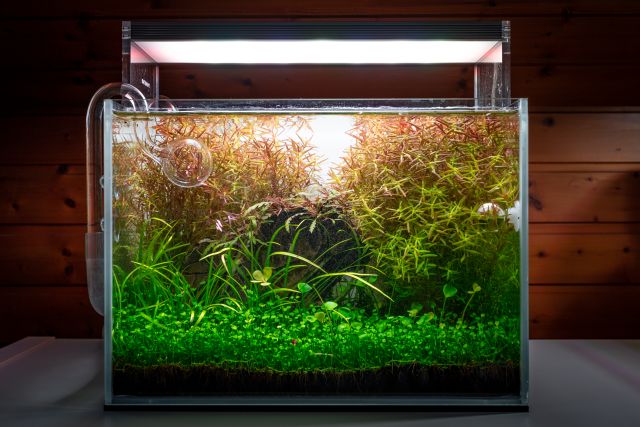 AS: "Youve been producing popular aquascaping and plant aquaristics videos since 2016 on YouTube. How did that come into being and why and when did you decide to open up your own channel?"

TG: "I started that channel on a whim, basically, after a mandatory break from aquascaping of a year or so. My then-girlfriends cat jumped off of a shelf and onto the glass cover of my 55 liter Scapers Tank, successfully destroying the glass cover, the whole layout and spilling most of the water. Fortunately, the cat wasnt harmed, but nevertheless I decided for the sake of the cats to not install another tank. My tanks need to stay visually open, and a rigid, opaque cover is just no option for strictly personal, aesthetic reasons.
After moving to Mülheim, the wish to set up another tank came up again - and with the purchase of my first 20 liter cube, the idea to document the whole set-up and development (I couldnt by any chance foresee where all this would lead to!) of my tank on YouTube in a series of videos, because it might be interesting for one aquarist or the other. Ive already had some experience with YouTube, because Id been running my photography channel there for six years already. The medium as well as the approach were already familiar, so the entry barrier was pretty low for me. That now, two years later, Id be more popular with my AquaOwner channel that with my photography one, was unexpected and perfectly unintentional. All videos are created from my own initiative when I find something noteworthy or interesting."

AS: "Youre pretty busy as a photographer (for architecture, mainly), already. Is there a connection between aquascaping and architecture to you?" 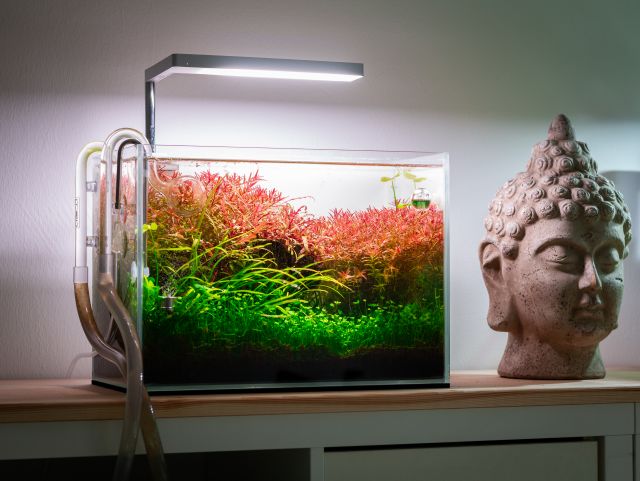 TG: "For sure! Besides that were all shooting pictures of our scapes anyway, wanting to share them on Instagram, Facebook and whatnot. The whole compositional theory from photography and more specifically: from visual arts, is a big help when designing a layout and creating a nice sense of depth, perspective, etc.
Just like I compose a picture with my camera before my eyes, I can compose a tank layout and utilize classical, artistic-creative tools which make the whole layout more exciting and harmonious. Typical examples would be the rule of thirds, the golden ratio and forced perspective by using differently sized objects close to the spectator - these are all elements from the art of classic painting - but also photography.
And eventually my profession as a photographer has helped me to produce high-quality, aesthetic pictures of my tanks very quickly while creating video content in the same high quality at the same time."

AS: "What are your influences? Where do your ideas and inspiration come from? Which artists have shaped you?"

TG: "I dont think that any individual artist has had much of an impact on me. At least I cant name one specifically. In general, I am a big fan of surrealists like Dali or H.R. Giger, but also Van Gogh, M.C. Escher and Mondrian are right up my alley. Ive been influenced by the art of painting as well, even though Ive never actually painted myself.
To get back to aquascaping now, I cant name anyone in particular, either. Of course the work of Takashi Amano is the most famous and his concept of creating a nature aquarium has undoubtedly been the most formative factor in aquascaping as we know it today. The biggest inspiration for me, comes from the whole array of layouts and unusual ideas out there, that engender new and fascinating scapes again and again." 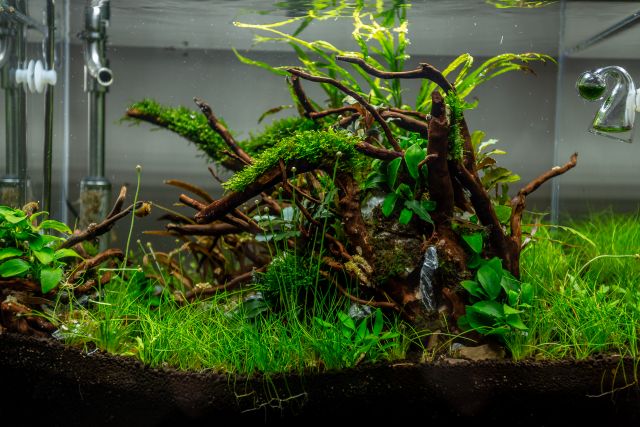 AS: "Your educational videos are sound and consistent. How long do you need to research and prepare before you can shoot another clip?"

TG: "First and foremost, this depends on the complexity of the topic. My video on the basics of fertilizing was probably the most complex in terms of preparation, because a lot of factors and aspects came together and intertwined in quite intricate ways. By principle, I only create videos on topics, I can directly show and film on location. So usually I usually have some experience in the topic Im covering and I can shoot videos on things I find noteworthy very spontaneously and without preparation because I am already IN the topic from my daily work with the aquarium - and still able to create a high added value. A good example for that would be my video on shooting aquariums. I didnt have to think much about the content, because its my daily thing. All I had to do was get in front of the cam and roll!
As a generalization it is safe to say, that an average video takes about 6-8 hours from idea/preparation to going live on YouTube - a typical working day, so to speak."

AS: "What are your favourite materials, like hardscape and plants?"

TG: "Exciting question! I cant really give a short answer to that, though. My favourite wood, would be Talawa, but I havent had a tank yet, that wouldve been big enough for most of the Talawa pieces I have in mind - so my answer here would be Red Moorwood. As far as stones are concerned, its definitely Frodo Stones (Ancient Stones) and the darker Seiryu Ryuoh variant.
My favourite plant would be the Hygrophila pinnatifida because of its look and the way I can use it for almost everything. Microsorum pteropus Trident, is great, too, because its super easy to please and spruces up any tank almost instantly!
I guess most of you would expect me to say Eleocharis Mini, because of my scapes from back then - but Eleocharis can get pretty bitchy, so its just my number 3." 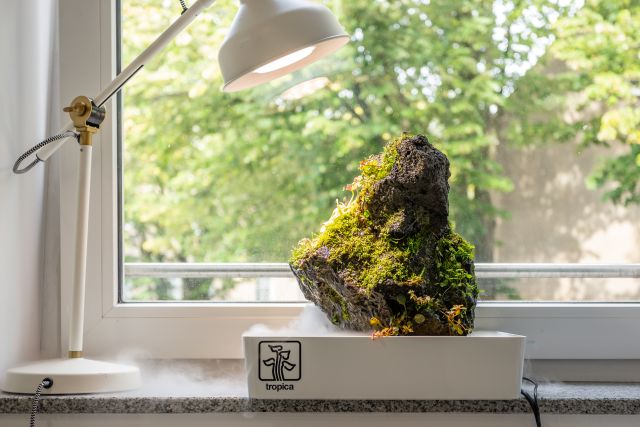 AS: "What would be your greatest wish: what would you like to shoot a video about?"

TG: "Right now Im getting the most fun out of giving the viewer an inside look into the world of aquaristics and aquascaping. Things that usually remain clandestine to private persons. An example would be a visit to a big plant nursery, fish- or hardscape wholesalers, aquarium manufacturers and so on.
I believe, that such peeks behind the curtain can strengthen the bond to the hobby and get the whole scene closer together when you know where all our things come from and under which circumstances, conditions and effort everything is produced.
My greatest wish?
Maybe travelling the whole span from natural habitat up to the vendor in Germany and possibly show each and every logistic step in between. Im thinking of fish here, or Asian hardscape. Taking in the conditions on location, tracking the whole process and then following the fish or hardscape on their journey to Germany, to their distributors and wholesalers, to the specialist traders and eventually into the aquarium. Would be more likely to result in a series of videos than a single one, though."

AS: "If you had to choose between a pretty stone and a beautiful plant, how would you decide?

TG: "So, hardscape versus softscape?

TG: "Tough one! But I think itd be a narrow victory for the plant, because plants can be changed in appearance with the right nutritional feed and care and thus stay dynamic. A pretty stone is nice and all - but itll remain just that: a stone." 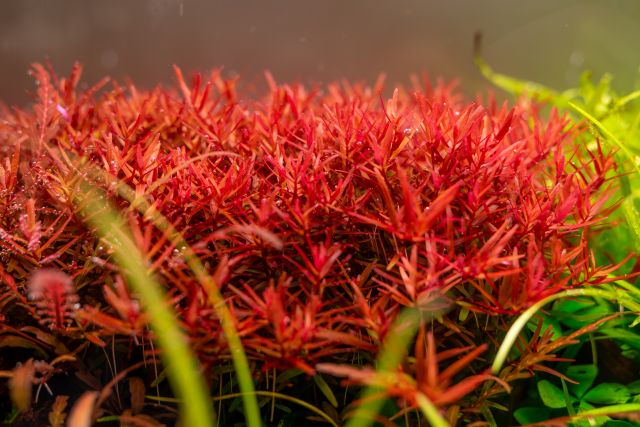 AS: "Thank you very much for this great, interview, Tobias."

All pictures in the article; copyright: Tobias Gawrisch - AquaOwner