Shipping and storage of in-vitro plants

While our main article "In-vitro aquarium plants" has already brought you closer to the topic of aquatic plants from in-vitro cultivation, this article deals specifically with the storage and shipping of in-vitro plants.

The in vitro culture of aquarium plants offers us aquarists the advantage of always having their own personal greenhouse with them in the form of a plastic cup. Together with the nutrient medium, which is specially adapted to them, this ensures optimum growth conditions at all times. For this reason, in-vitro plants can reach cultivation times of up to six weeks in the laboratory before they have to be transplanted into fresh medium. But even under ideal conditions, cultures may spontaneously collapse from time to time or become overgrown with contamination. The transport to the dealers and customers as well as the subsequent storage are further points which can have a negative effect on the shelf life of in-vitro plants. For this reason the pots should be used within a few days after receipt to prevent possible spoiling!

Shipping in-vitro plants often poses a special challenge. In contrast to conventionally bred aquarium plants, which can be packaged in a bag lying relatively close to each other, there is usually a lot of space around an in-vitro plant inside its cup. For this reason, the transport routes to the dealer and later to the customer pose a certain threat to the plants' health. They are strongly shaken on the conveyor belts and in the delivery vehicles, and as a result plants with little developed roots are regularly delivered completely smeared with the culture medium. This can also lead to the contents of an XL pot being pushed together, forming a kind of compressed 'ball' of plants and medium. The portion appears to be much smaller than it actually is. 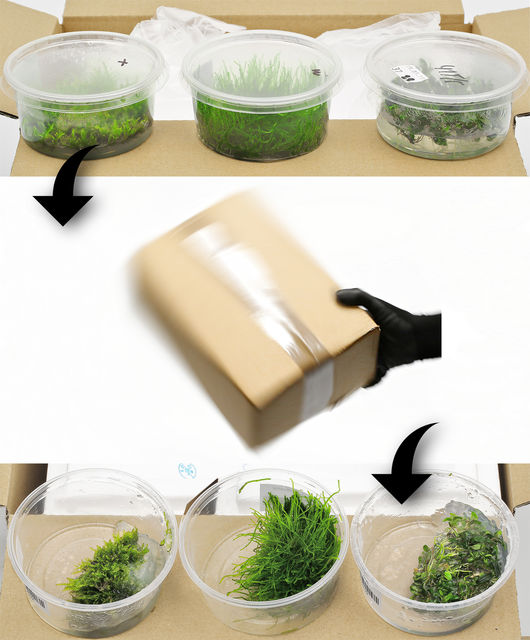 Although it is not a problem for the plants if their above-ground parts come into contact with the culture medium - it should be thoroughly washed off before planting - such a bumpy transport route is always a possible gateway for contamination in unsealed pots. If liquid escapes from the interior of a tilted pot, any bacteria and mould spores that may be present get into the liquid. In the further course of the transport route, the contaminated liquid may find its way back inside the pots. The storability of plants affected in such a way may be limited under these circumstances.

Should the implementation of the new project be delayed a little, a few points must be observed before using the plants in order to achieve the maximum possible storage time and vitality of the in-vitro plants:

After receiving your plants 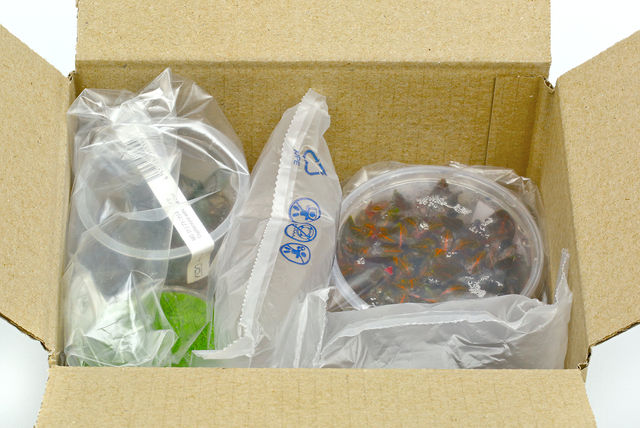 All in all, we recommend using in-vitro aquatic plants as soon as possible, but no later than 3-4 days after receipt of the goods. Due to the transport route and the uncertain storage of the plants at the customer's, we can only accept complaints regarding vitality up to 24 hours after receipt of the goods. Although the in-vitro plants can be stored for a longer period as described above, we cannot accept any liability for this. Here it depends very much on the type of plant, the transport and appropriate storage conditions.
In-vitro plants can spoil even in our own plant nursery, even though we take good care of perfect storage conditions. We check our stock of in-vitro plants daily, to sort out spoiled pots. We recommend buying the in-vitro plants immediately before the start of a new project to prevent unnecessary losses.