Decision-making aid for the purchase of aquatic plants

Many aquatic plants are offered in various forms in commerce, and we are frequently faced with the question which variant to buy. In recent years, plants from tissue culture (so-called InVitro plants) have become more and more popular. These aquatic plants are cultivated under laboratory conditions, and they are sold directly in their culture cups, small plastic containers with a lid.
With all other cultivations methods for commercially available plants, the plants are not sterile. Potted aquarium plants are a true classic. Most potted plants are cultivated in their emerged form in special aquatic plant nurseries, which means they are grown with their green parts above the waterline. Usually rock wool is used as a substrate.
Potted plants that have been cultivated under water (submerged) are also available, especially those species that wouldn't survive above water. Submerged plants, especially stem plants, are also available in bunches, floating plants are mostly sold in portions, in a plastic cup.
No matter if you decide for tissue-cultured or potted plants - every form of delivery has its up- and downsides. Here well give you a couple of tips for the purchase of aquarium plants in the form that's right for you. 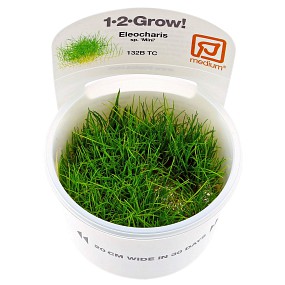 Aquatic plants from tissue culture offer several benefits. They are free from pesticides and unwanted extraneous organisms such as parasites, pathogens, snails, planarians, insect larvae, algae and annoying "weeds" such as duckweed. The pesky removal of rock wool is omitted completely. And with one portion you get quite a large number of small individual plants. But there are also a lot of untrue rumors and myths about in vitro plants. We would like to clarify some things here first:

"The plants in the in vitro cups grow in their submerged form."

This is, of course, wrong. There is only a nutrient gel at the bottom of the cups, above that there is only air. The aquatic plants visibly grow in their emerged form, though their growth habit in tissue-culture cultivation is rather peculiar. Due to the confined space, the method of procreation (cultivation from small bits of tissue) and the special composition of the growth medium, plants from tissue culture stay very small. The plants assume their full size and species- and variety-typical look rather soon after being planted into an aquarium. 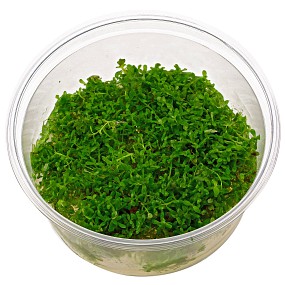 Easy to see: The special, small growth habit of a Rotala species under in vitro conditions.

An exception to this rule, however, are those plant varieties that need to be cultivated submerged in liquid growth medium such as Potamogeton gayi and Fontinalis antipyretica. These plants are actually already in their submerged form. 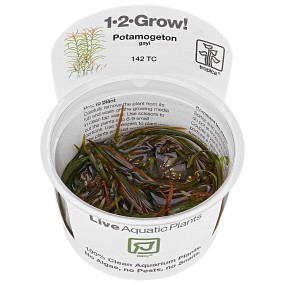 "In vitro plants have a very long shelf-life."

This is not quite correct either. First and foremost, the growth habit and durability of a plant differs from species to species. Some plant species such as cryptocorynes or Eleocharis are definitely pretty durable and may live in the cups for several weeks. However, the statement is not applicable to fast-growing species such as stem plants. When stored for a prolonged time, they can sometimes even grow so rapidly that due to the plant mass, the lid of the cup will pop off. In in vitro cups full of plant mass the lower leaves may get too little light and die off. Despite the unappealing appearance, this is definitely no big deal especially in the case of stem plants, since the healthy shoot tips will keep growing well in the aquarium. In vitro plants need appropriate storage conditions. Moderate lighting and an air-conditioned, cool cup storage should be preferred.

"The color of the growth medium is a telltale sign that the plants have been sitting in the shelf for too long."

This, too, is incorrect. First of all, some manufacturers use growth media of different colors, and on the other hand there are some plants (e. g. species of the genus Marsilea and Heteranthera zosterifolia) that emit substances that change the color of the growth medium.

"The consistency of the growth medium is a telltale sign that the plants have been sitting in the shelf for too long."

This is not correct either. Both color and consistency may vary from supplier to supplier. For example, the supplier Tropica has recently started using a growth medium that is no longer a firm gel, but a liquid (as mentioned above). This has no negative impact on the quality of the plants. Quite the contrary: You dont have to remove any gel residue from the plants roots, you just dump the growing liquid and you're ready to go. The plants can be used much faster this way. Furthermore, the liquid medium also allows in vitro cultivation of plant species that can grow only under water - like Potamogeton gayi, which we've already mentioned.

Nope, quite on the contrary, actually. Potted plants have it easy during the acclimatization and adaptation phases as they are bigger and more robust than plants from tissue culture. You should also take into consideration that plants from tissue culture are raised in a germ-free environment and that aquariums usually have a very high bacteria count, so the plants need to build immunity first.

"Pronounced roots are a telltale sign of a cups long shelf-life."

This is incorrect and yet again depends on the species. Some plants might form almost no roots at all in an in vitro cup, whereas others grow like theres no tomorrow. This has nothing to do with the shelf-time of the cup, though.

"In vitro plants are specifically suitable for Wabi-Kusa or the dry start method."

No, because from experience, potted plants grown above the waterline have a bigger advantage. They are more robust than plants from tissue culture and they are already adapted to life above water. For a Wabi-Kusa or the dry start method, potted plants in their emerged form should be preferred. 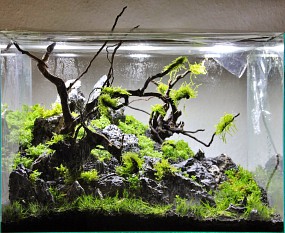 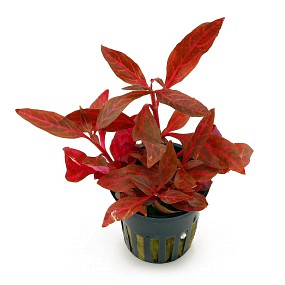 Potted aquarium plants are, as initially mentioned, usually plants cultivated in their emerged form. Their roots grow in a special substrate in a plastic mesh-pot, where they are fed with a special nutrient solution in the aquatic plant nursery. The substrate usually consists - as we've mentioned above - of rock wool but may be made of coconut fibre in some cases. It may contain residues of fertilizers, and possibly also algae or extraneous plants such as duckweed. Therefore, you should remove the substrate as completely as possible before you use the plants in your aquarium (instructions for that can be found here in the chapter "Potted Plants"). 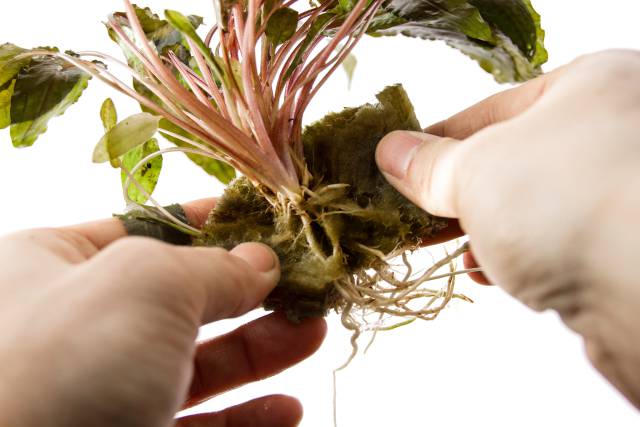 But especially with ground covering plants, you can use the rock wool strategically to better anchor the plants in the soil (this is described in the further course of the chapter "Potted Plants". 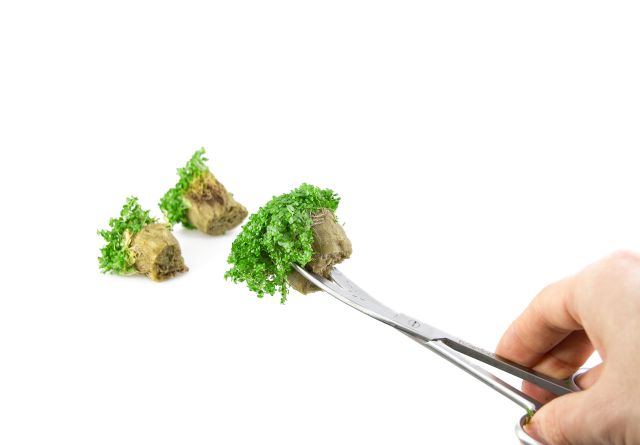 In rare cases, emerged potted plants might bring with them tiny pests that had moved in during their time in the plant nursery. These may be little slugs or insects like aphids, whiteflies and thrips. This is usually not an issue when the plants are used in an aquarium, since those critters are land-dwellers and cannot survive under water, moreover they would soon be eaten by the ornamental fish in the tank.
There is usually no aquatic fauna such as aquatic snails, planarians and other worms on emerged potted plants themselves, but the pots are usually placed in water during cultivation and storage, so such copilots in the pots and substrate cannot be ruled out completely. This is especially the case with submerged potted plants such as Blyxa japonica or Vallisneria.
The most prominent feature of emerged potted plants is their robustness. Another important criterium is that the plants already have some height, because potted plants like ferns, Anubias, stem plants and rosette plants such as cryptocorynes und Echinodorus are generally much larger in girth and size than in vitro plants. When the background or the middle ground of an aquarium behind higher hardscape layouts are planted, a plant height of over 10 cm is a clear advantage. The plants are closer to the light and they arent shaded off by stones or driftwood and thus inhibited in their growth. Also plants from emersed cultivation are quite voluminous from the very beginning and can green up the aquarium from day one. In contrast, in vitro plants are only a few centimeters high and small in circumference. 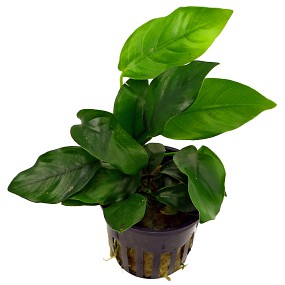 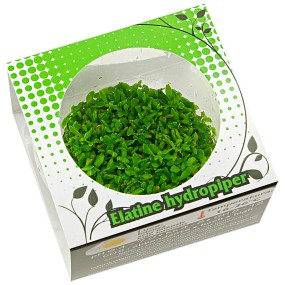