How will my aquatic plants turn properly red?

A guide to the coloring of red aquarium plants

"Why aren't my stem plants turning truly red?" This question is certainly heard a lot, and even one or another of the more experienced aquascapers and planted tank keepers wonders. Peoply buy aquatic plants that are supposedly red-leaved, they provide their plants with light and sufficient nutrients - and nevertheless their color remains brownish or orange instead of turning a proper red or magenta, as was presented on those awesome high-gloss advertising pictures and on social networks. Do these flashy, red plants actually exist? Or are those pictures actually just the result of clever photography and picture enhancement magic? In the following article well shed some light on the issue and well show you how to help your reddish aquatic plants turn deeply red.

Why do plants turn red anyway?

First of all, we should have a look at the reason why plants turn red at all. There are several factors than influence this phenomenon: For example, some plant species have developed colorful (including red) petals to attract insects for pollination. For blue, red or violet coloring, the so-called anthocyanins are responsible. These colors are produced by the plant itself. Another function of these substances is that the plants can protect themselves from too much sunlight and resulting sunburn. The anthocyanins absorb radiation and convert it into heat energy, which benefits the plant. Damage to the plant cells and especially to the proteins contained in them - including the DNA in the cell nuclei - is prevented that way.
Conclusion: Lots of light is by all means a prerequisite for giving reddish aquatic plants the desired deeper red color. 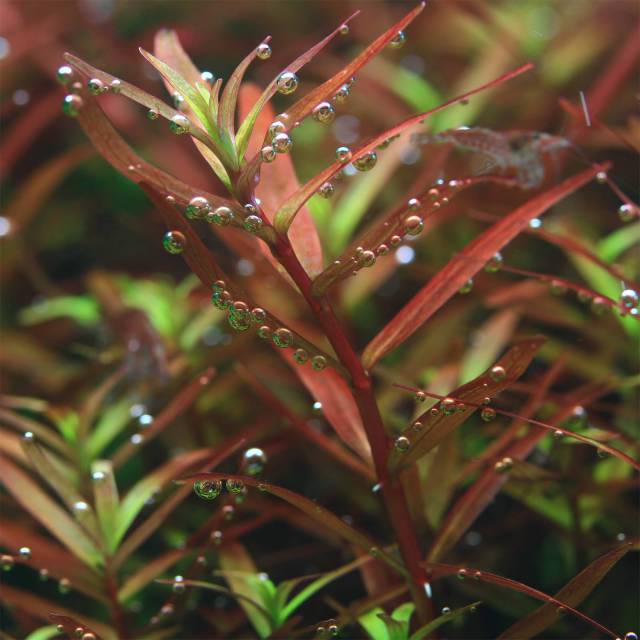 The profiles of various aquatic plants talk about how vitally important certain nutrients such as iron are for the reddening of an aquatic plant. Of course it is correct that plants should constantly be provided with carbon as well as with all micro- and macronutrients in ample amounts to grow healthily.
However, on the one hand, iron isnt necessary for the formation of anthocyanins (it is required for the formation of chlorophyll, though - for the green colors), and on the other hand, oftentimes red hues in aquatic plants are actually a reaction to a lack of nutrients - which makes the phenomenon the exact opposite.
Especially a limitation in the supply with nitrogen and phosphate can bring out the desired red hues youre after. Especially when high levels of nitrate are present, the leaves of certain plants turn green or brownish. Its with a lack in nitrate that makes them turn truly red or pink. Many aquascapers use this effect for their final shot, when, by lowering their phosphate and nitrate fertilization before taking the picture, they make their plants turn the desired hue for the photo. In the long run, however, an insufficient supply with nutrients would jeopardize the plant growth, so by all means this deficiency shouldnt turn into a regular thing.

Choosing and buying the right sort of plant is also crucial if you want colored plants in your aquarium. Let's take Rotala rotundifolia, for example. Different variants of plants of the same species (here: Rotala rotundifolia) may be commercially available which may have quite different colors, depending on the original plant the population is based on. Depending on the nursery, totally different-looking plants may be sold under the same name. The classic Rotala rotundifolia doesnt turn truly red, but remains largely orange-reddish (see picture). 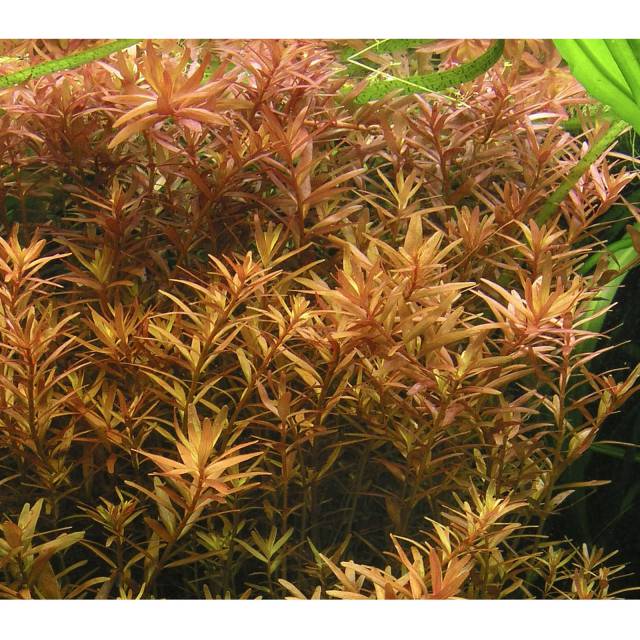 If a flashy red or pink is what you are looking for, you should consider buying species such as Rotala sp. "colorata" (see picture) or Rotala sp. "Gia Lai" / "H'Ra" instead. These varieties display intensely red colors, sufficient light intensity and a corresponding nutrient composition provided. 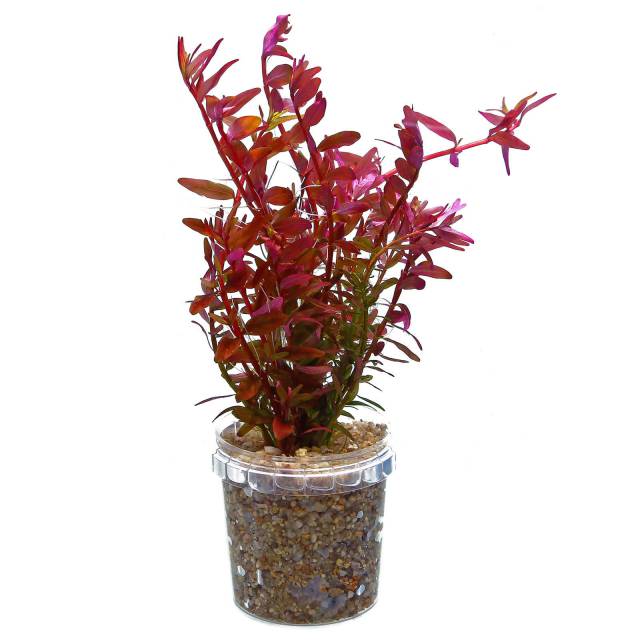 Nevertheless, there are even plants that remain red under weaker light. To make the life of planted tank keepers easier we have made a small list for you:

The choice of proper light, be it the aquarium lamp itself or the color temperature in photography, can be a pretty decisive factor when it comes to plant redness, too. If, in addition to white light, colored (red and blue) fluorescent tubes or LED systems with RGB content are used, the hue of colored objects such as fish and aquatic plants in the aquarium will intensify. Especially the appearance of red stem plants benefits notably if LED-lights such as the RGB Solar by ADA, Twinstar LED Light or Chihiros RGB-series are used. 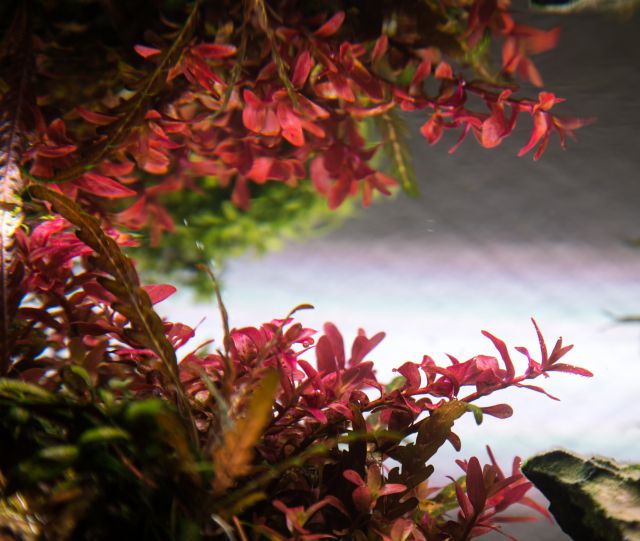