Emerse use of in-vitro plants

Of course, in-vitro plants can also be cultivated in their overwater form (emers). However, it should be noted that these especially cultivated plants should be treated with special care at the beginning. In the following article we explain how to use in-vitro plants for a Wabi-Kusa, Paludarium or a Dry Start.

In contrast to conventional potted plants, which usually come from the nurseries as robust goods adapted to emerse growth, in vitro plants first have to acclimatise slowly. Inside the in-vitro cups the humidity is always almost at a solid 100% and there is no significant air movement. Under these conditions, the plants therefore grow daintily and remain small and tender. Reinforced cell walls or the wax layer - called cuticle - on the outside of the leaves, which under normal conditions protect the plants from the weather and predators, are only partially formed here. In dry indoor air, in-vitro aquatic plants would therefore dry up quickly. If one considers some points, the emerse culture of most plant species from in-vitro culture is nevertheless possible. 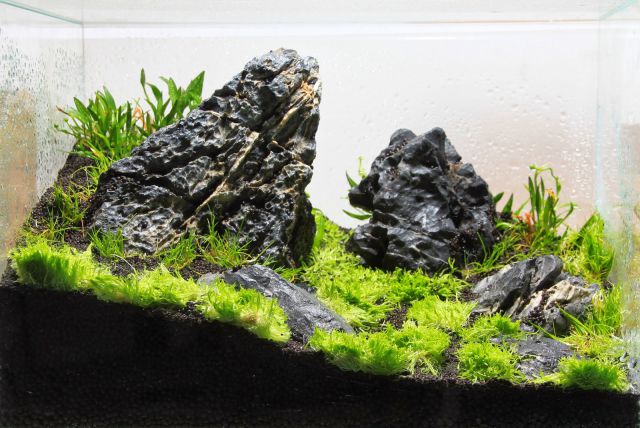 Dry Start is a special way to plant an aquarium or aquascape with aquatic plants. First the aquarium layout is made as usual, with substrate and hardscape (roots and stones). Afterwards the layout is planted.
After planting, the entire contents of the aquarium are moistened abundantly, for example with a spray bottle. Finally, the tank is sealed as airtight as possible with cling film or another cover. This ensures that the humidity remains in the tank and cannot escape. Only after a few weeks, when the plants have developed well and spread out on the substrate, the aquarium is filled with water. With this procedure very steep substrate rises can be realized, which would not be so easy in a filled tank without a good root penetration. You can find more information about this topic in our special article about the Dry Start.

In-vitro plants are generally well-suitable for a Dry Start, because the high humidity conditions in the covered aquarium tank are quite similar to the conditions they know from their life in their in-vitro cup. Most species already grow in their emersed form in their cups, so they don't have to adapt to new conditions that much.
With a dry start with in-vitro plants, the physiological conversion of the plants from their emersed to their submersed form takes place only after the flooding of the aquarium. Therefore, the duration of the dry start is not a decisive criterion for its success. Here one should rather orientate oneself on whether all plants are vital or whether the substrate is already sufficiently overgrown.
Caution should only be exercised in connection with possible mould or bacterial growth: Plants grown in-vitro are not accustomed to microorganisms and their immune system may find it difficult to defend itself against pathogens. It is therefore generally recommended to eliminate such potential problems as quickly as possible in order to avoid propagation in the aquarium and damage to the plants. 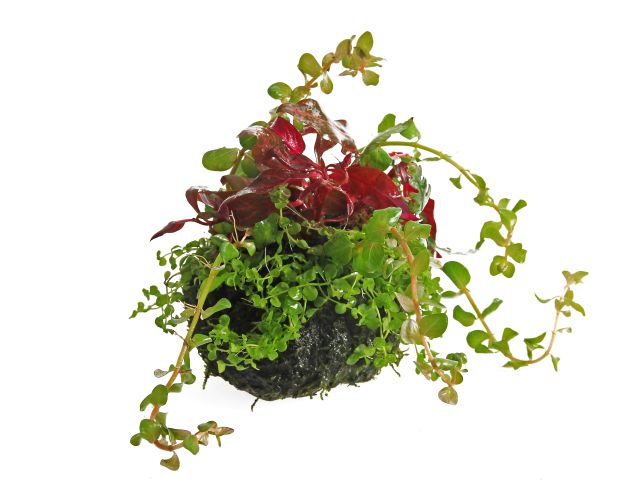 As a simplified translation, the Japanese term "Wabi-Kusa" means "beautiful grass landscape" and was made known in connection with the aquaristics of Takashi Amano. In principle, a Wabi-Kusa is a soil portion formed into a ball, from and on which various plants grow in emersed conditions, i.e. in their overwater form. The Japanese aquarium designer Takashi Amano originally used Wabi-Kusa balls to plant large aquariums in a very fast and efficient way. Here the Wabi-Kusas were simply placed on the substrate and the tank filled with water. But these pretty plant balls can also be maintained in this emersed form. The Wabi-Kusas are placed in a nice bowl or vase made of glass with a few finger widths of water and well lightened. With a little attention to humidity, the aquarium plants can continue to grow in this beautiful layout.

If you have newly created a Wabi-Kusa, it is advisable to place the planted soilball in a suitable container and close it airtight with a cling film during the first few weeks. In order to prevent the formation of mould, the container should occasionally be ventilated for a short time. After the plants have adapted to their new environment, the humidity can be slowly reduced by making a few holes in the film or by opening it in steps. Last but not least, the cling film can be removed completely, because the water plants have adapted to the air indoors. To ensure that there is still enough moisture, there should always be some water in the Wabi-Kusa bowl, and the plant ball should be sprayed regularly with water.

So, a Wabi-Kusa with in-vitro plants is in principle an absolute possibilty. Due to their poorly developed protection against environmental influences and dehydration, however, plants from in-vitro culture need a similar length of time as submersed plants to adapt to the rather dry indoor air. It is therefore advisable to plan more time for this phase, to ventilate the Wabi-Kusa regularly and to reduce the humidity only very slowly by opening the cover film step-by-step.

You feel like starting a Wabi-Kusa yourself? We have a handy guide describing the topic in more detail.