In our main article about in-vitro plants we have compiled all important information about in-vitro aquarium plants. In the following article we deepen and explain important details on the nutrient medium of aquatic plants cultivated in-vitro-style.

Intact higher plants can basically grow photoautotrophically. This means that they only need light, water and a sufficient supply of nutrients. Leaves and roots each perform specific metabolic functions that contribute to the growth of the entire organism. In in-vitro culture, depending on the plant species and propagation method, often only individual organs are used for the propagation of the plant, which is why a nutrient medium specially adapted to the plant species must be provided. All nutrient media have in common that they contain not only water but also the macro- and micronutrients, vitamins and phytohormones required for growth.

As a rule, in-vitro plants are cultivated on a solid medium. For this purpose, a solidifying agent such as the gelling agent agar or the thickening agent gellan is added to the nutrient solution. Agar is obtained from the cell walls of various types of red algae. Since this is a natural product, depending on the degree of purity of the material used, some salt residues may still be present. An agar-based gel retains its strength for a virtually unlimited time, but has a clearly visible whitish haze. The polysaccharide gellan is produced biotechnologically by microorganisms from plant material. The substance has a very high purity due to the manufacturing process, so that corresponding gels appear almost transparent. Due to changes in the pH value of the medium, a gradual liquefaction occurs with long service lives. However, it has no effect on the plants that have already grown inside at this time.

Both gelling agents are completely harmless to aquarium inhabitants and are also used, for example, in the food industry to solidify soups and jams. Nevertheless, it is advisable to remove the gel thoroughly before planting in vitro plants, as it contains many nutrients and sugars and could contribute to bacterial water turbidity, especially in small aquaria (refer: "Preparing in-vitro plants").

The culture medium consists mainly of water and is therefore always subject to a certain amount of natural evaporation in unsealed pots. Occasionally this can lead to a certain shrinkage of the medium. In such cases, however, the nutrient medium is by no means "used up" or "too old" and usually still contains all the necessary nutrients.

Instead of shrinkage, a certain liquefaction of the medium may occur over time or during transport. The gelling agents used form a kind of 'sponge' on a molecular level when cooling, which absorbs water. If this structure is disturbed, it can release the bound water again and the medium loses its strength.
Both phenomena are primarily due to technical reasons and are not a quality feature of the plants cultivated on the medium. They can be used in the aquarium without hesitation, regardless of the condition of the medium. After all, the medium should be removed anyway before planting.

Tropica now largely dispenses with the use of solid culture media in its 1-2-Grow! pots. This has the advantage that the liquid culture medium only has to be poured off and possibly rinsed off briefly. The more time-consuming removal of the solid medium is no longer necessary and the plants can be planted more quickly. These slightly different cultivation conditions can sometimes lead to a habitus in the plants in the 1-2-Grow! pots which is very similar to the submersed form.
True aquatic plants like Potamogeton gayi are generally cultivated in a liquid medium without the addition of gelling agents, as these cannot survive emers even under in vitro conditions. 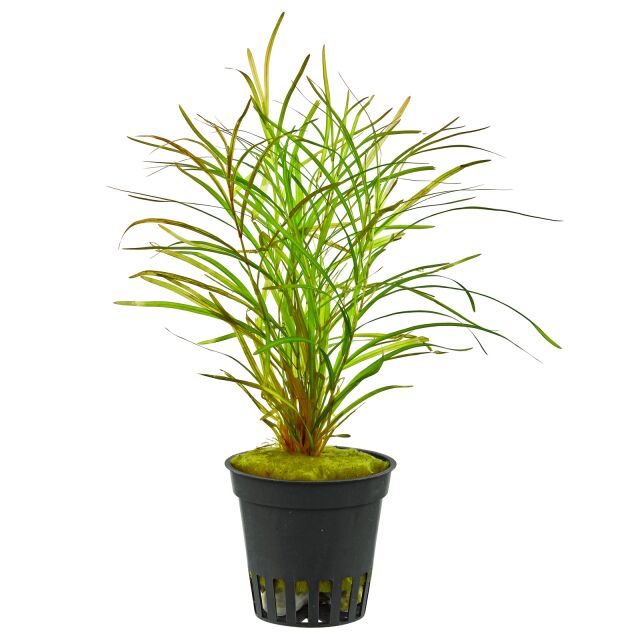 Colour of the medium

As already mentioned, the gelling agent used gives the culture medium a characteristic colour, which can range from completely transparent to milky white. The cultivation of certain plants also requires other additives that can change the colour of the gel. One of the most common colouring additives, for example, is activated carbon, which strongly clouds the medium and makes it appear grey to deep black.
However, the most common cause of discoloration of the culture medium is the plants themselves. During growth, these plants transfer various secondary metabolites to the medium via their roots. Small wounds of the plants cannot be avoided during the propagation of in vitro cultures by division and planting of the pots. From these wounds, plant juices and the dyes they contain seep into the nutrient medium. Occasionally, in vitro plants also discard individual older leaves in their pots, which can also release colouring substances into the medium when they decompose. (refer: "Appearance of in vitro plants").
Unlike in nature or in the aquarium, where the microorganisms living in the soil break down the plant excreta or are simply not visible in the dark substrate, the secondary plant substances accumulate over time in the sterile nutrient medium and can thus lead to discoloration. These are completely natural processes. As a rule, such discolorations are absolutely harmless and do not affect the plants. 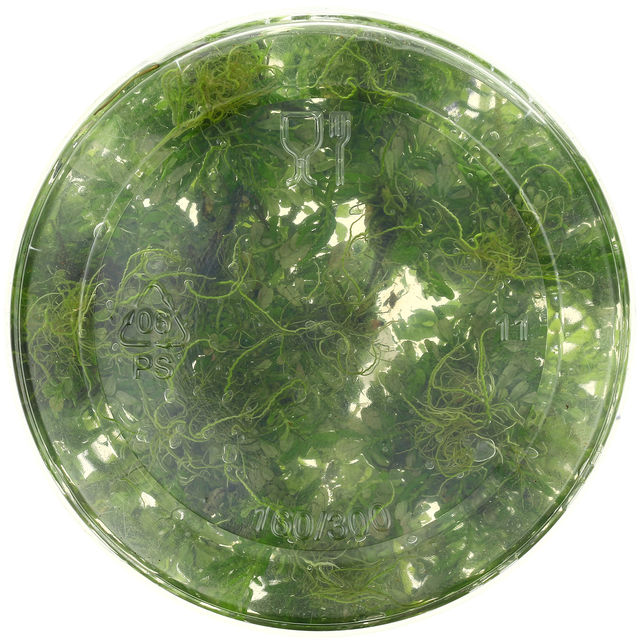 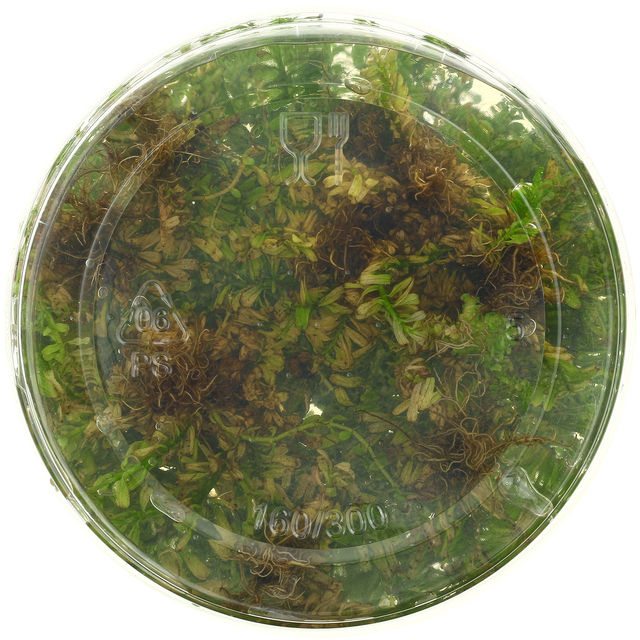 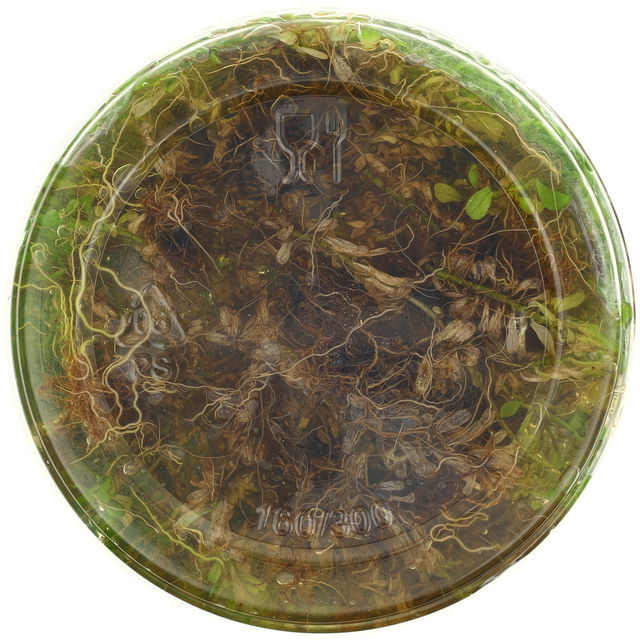 Here you can see the time course from the bottom of the cup. Gradually discolorations accumulate in the medium.

The most common examples of such discolorations are:
Water hyacinth plants such as Heteranthera zosterifolia or Eichhornia diversifolia produce large amounts of a blue-black pigment from the anthocyanin group. This often makes the culture medium appear deep black.

Marsilea crenata have a high carotenoid content. These often lead to a yellowish-orange coloration in the medium.

Phenolic substances serve the plant, among other things, as messengers and as protection against predators. These substances are highly reactive and, in in-vitro culture, lead to a brownish to black discoloration of the nutrient medium around the root area. This effect occurs especially in Rotala species. In young cultures an excess of such substances can lead to damage, but this does not pose a risk to the adult plants in their pots.

In-vitro aquarium plants that have a discoloured nutrient medium for the various reasons explained above and on top of that, have also clearly been shaken back and forth by the parcel shipment, can look particularly horrific. The movement during transit mixes plant material and nutrient gel and compresses the plant matter, usually on one side. The result looks sometimes like an unsightly plant ball mixed with brown culture medium. You can see the difference in the following A/B photo comparison: 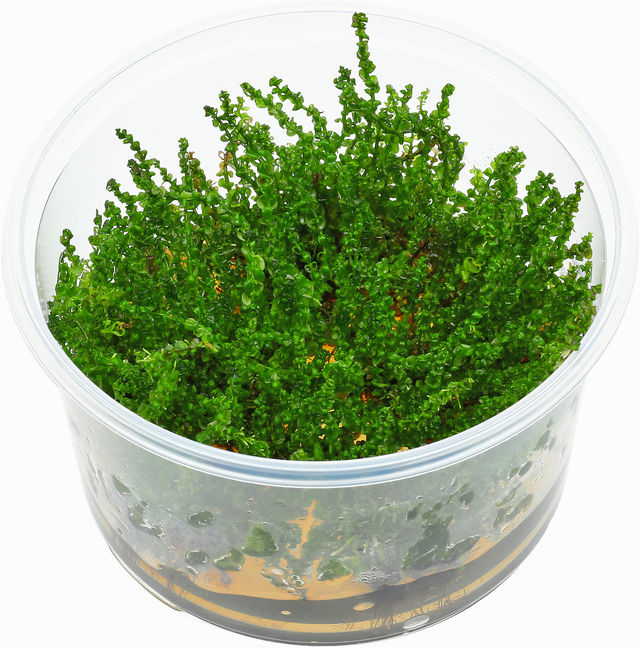 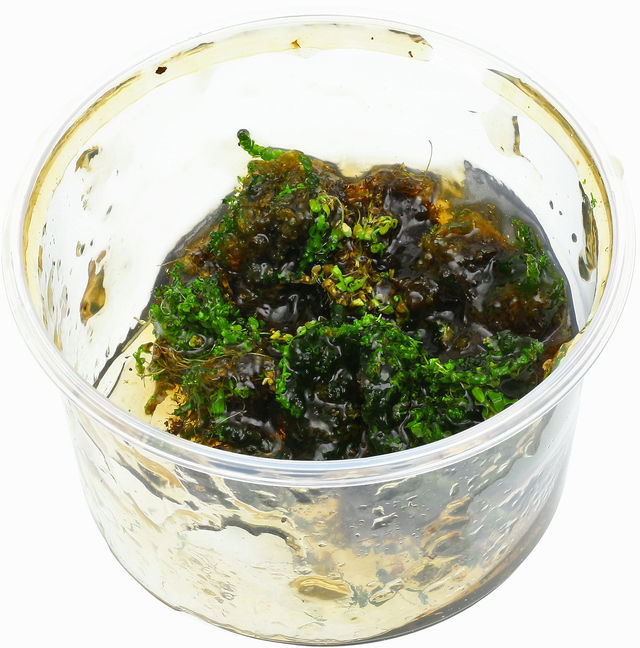 The same plant after a particularly rough shipping route.

Even if the result looks really haggard at first: the plant is still absolutely healthy and neither rotten nor bad. The brown coloration is only caused by the older culture medium in combination with the rough shipping. The in-vitro aquatic plant can therefore be used without trial and error and will grow and thrive well, provided that the nutrient conditions are good. As always, the medium should be thoroughly rinsed before planting. You can find more information about shipping in-vitro goods here.