About the optics of in-vitro aquatic plants

Plants from in-vitro cultivation have some special characteristics, which are mainly due to the way they are cultivated. The special cultivation conditions and the use of growth regulators have an effect on the habitus of the plants, so that their appearance and behaviour sometimes differ strongly from traditionally produced plants.
In this article we will go into more detail about the special appearance of in vitro plants.

General information on the habitus of in-vitro plants

The most conspicuous feature of in vitro plants is often the small size of leaves and stems, which is reflected equally on the cellular level in smaller chloroplasts and mitochondria. Since the culture medium provides all necessary nutrients and also complex molecules such as sugars or amino acids, the plant can greatly reduce certain aspects of its metabolism and thus also the size of certain organs. Another factor contributing to this dwarfism is the altered hormonal balance of the in-vitro plants. The phytohormones added to the medium for propagation in early culture stages often have an effect on subsequent culture steps and thus also change the habitus of the plants in the sales cups. This mainly affects the roots as the direct contact to the culture medium, which leads to the fact that some in-vitro plants sometimes develop almost no roots, and others very many. The degree of rooting in a cup is therefore at best an indicator for the propagation method used and allows only limited conclusions about the age of the plants or the storage time of the cup.

Inside the cups there is only very little or no air exchange, so that the humidity here is always almost 100%. Reinforced cell walls or the wax layer called cuticle on the outside of the leaves, which under normal conditions protect the plant from the weather and predators, are only partially formed here. In vitro plants are therefore generally somewhat more sensitive than emersed specimens.
At the same time, this high humidity means that stem plants in particular often form completely submerged leaves or transitional forms with partially altered colouring already in the cup. This phenomenon can be observed especially directly under the lid of the cups.

Usually, plants require in-vitro cultivation, depending on their natural speed of growth and robustness, a few days to get used to the new conditions in the aquarium. During this time the metabolism of the plants normalizes and the physiological adaptation to the new conditions outside their sterile cup proceeds. This period is characterised by slow to completely stagnant growth, maybe loss of adult leaves, especially in Cryptocorynes and Bucephalandra. Even if such a plant appears to die, this is usually not the case. New leaves, completely adapted to submerged life, will soon start to sprout!

Another frequently observed phenomenon is hyperhydrogenity or vitrification. The tissue of hyperhydrogenous plants appears to be glassy or swollen, affected shoots appear watery and translucent at their surface. Due to chlorophyll degradation and altered protein metabolism, vitrified tissues appear less green than healthy parts of the same plant, grow more compactly and are more fragile.
The occurrence of hyperhydrogenity remains unpredictable, but physiological stress is suspected to be the main trigger for this phenomenon. This can occur, for example, as a result of wounds during routine propagation steps or during transport, or over time as a result of a culture medium that has not been optimally adapted. In most available in-vitro plants, however, the symptoms are most usually caused by the leaves colliding with the lids of their culture cups for a longer time.

This condition results in slower growth and tissue necrosis and is a symptom of physiologically damaged plants. Hyperhydrogenity, however, is reversible, and after careful planting, affected plant parts often produce healthy shoots after some time of submersion.

Brown or decoloured leaves and shoots

Especially in slow-growing rosette plants such as cryptocorynes, brown or dead leaves are often found in the in vitro cups. This is mainly due to the fact that these slow-growing plants require a longer cultivation time in the cups before the portion is ready for sale. In the progression of regular, natural growth, older leaves are shed. Unlike in nature or in the aquarium, however, the sterile in-vitro conditions lack the microorganisms necessary for the rotting of these leaves, so that they accumulate around the plant over time. Sometimes the culture medium can also get a dark, yellowish-brown tint, since often not all the pigments contained in the leaf can be reabsorbed by the plant.

Even in in vitro cups with a longer standing time, individual brown leaves can sometimes form, while the rest of the plant continues to grow very vigorously and the healthy plant mass increases. In this respect, isolated dead leaves are no cause for complaint if there is still enough healthy plant material left. In the following picture series, you can see how an in-vitro plant develops over a longer period of time inside its sterile cup: In addition to plant growth and the appearance of overaged leaves, discolorations can also be observed in the nutrient medium itself. We cover that topic in more detail in our article "Culture medium of in-vitro plants". 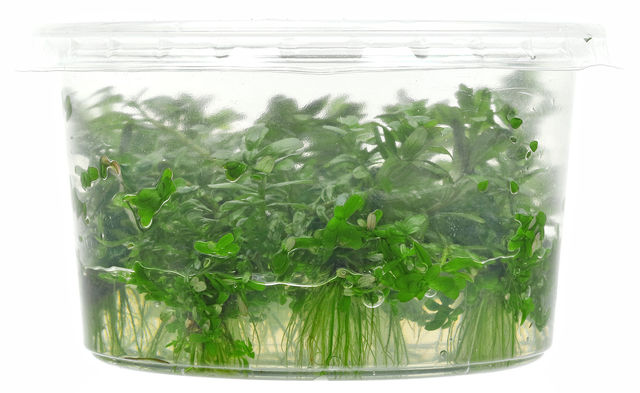 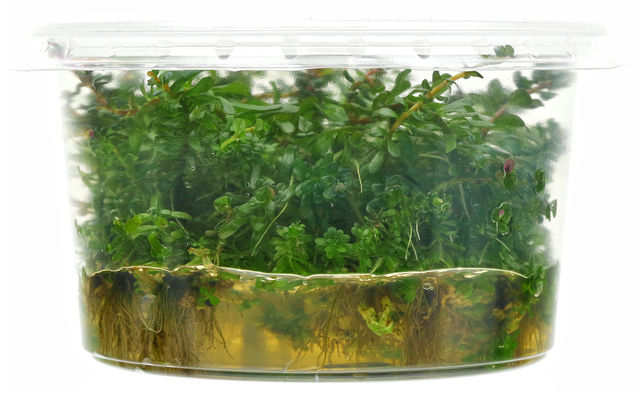 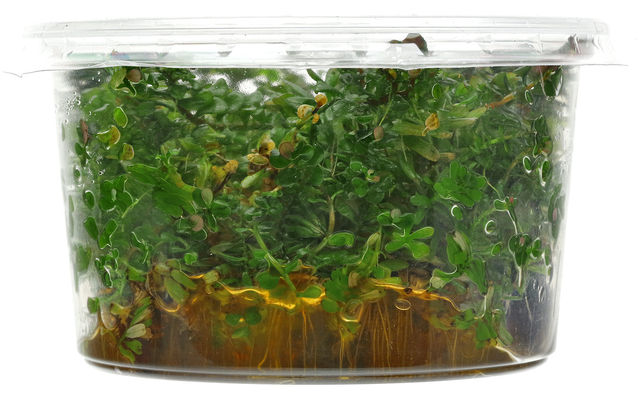 development of an in-vitro plant over time. 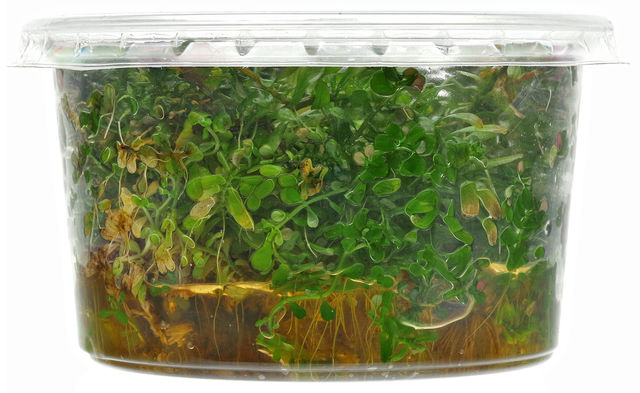 After standing for a longer period, some leaves have turned brown sporadically, while the majority of the plant portion has continued to grow very vigorously.

Stem plants tend to fade in colour from time to time in proximity of the medium - especially with densely packed cups. Due to the dense biomass, light hardly penetrates into the lower areas of the pots, and as a result the chlorophyll is degraded there over time. Affected plant parts appear whitish, and sometimes even leaves can be thrown off in these areas. This phenomenon can be observed increasingly in in-vitro cups with banderoles, as these absorb additional light. After planting into the aquarium, the affected plants quickly form new chlorophyll in the light and continue to grow vitally!

Due to the special conditions inside the in-vitro cups, mosses sometimes show an increased growth of their rhizoids. These root-like adhesive organs can grow out considerably longer here than under normal conditions. As a result, the moss shoot appears brownish, but it is only due to the fact, that the mass of brown cells exceeds that of the chlorophyll-containing cells.

In some other cases, caused by physiological stress, it may actually occur, that the moss itself actually turns brown. The reason for this is the degradation of the chloroplasts, which subsequently causes the moss to appear yellowish-brown throughout the whole area, although the growth centres of the shoot tips remain green. This change can be observed in mosses pretty often out in the wild as well and is first and foremost a sign of the organism going into a supersustained state. In in-vitro culture, too high temperatures in the cup caused by too much light or sub-optimal nutrient concentrations may be the main causes of such behaviour. Similarly, the medium already provides the necessary nutrients, so that the mosses as simpler organisms are not necessarily dependent on their chlorophyll. Under aquarium conditions, the shoots quickly return to their normal habitus, namely a lush green.