Hardscape in a tank with invertebrates: driftwood

Most designed aquariums and aquascapes cant be imagined anymore without driftwood made of actual driftwood. If you have catfish in your tank, you will appreciate driftwood - in addition to its beautiful appearance - as a fiber supplier. Crabs and shrimp need fiber, too, which they like to rasp off the driftwood - what would be more obvious than some beautiful driftwood from the pet shop, which is especially meant to be used in an aquarium?

How to prepare aquarium wood for the use in aquariums and aquascapes, maybe even customize and green them, can be learned in our Wiki-article Preparing driftwood. In the following, wed like to dedicate this article to the various, available driftwoods and their suitability for shrimp tanks.

Moorwood, as the name implies, comes out of moors, where they were buried in the soil without any oxygen, able to soak up humic acids. This wood usually does not rot in the aquarium. Moor roots have a characteristic, dark brown color, often slightly shiny, with quite a smooth surface. 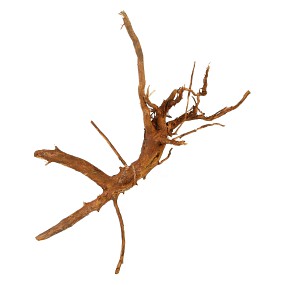 Since Moorwood keeps releasing humic acids and tannins, it can stain the water an amber or brown hue, without making it turbid, though. Filter media like Seachem Purigen can be used against these discolourations, but it is also possible to just sit them out. Shrimp and fish dont mind the acids and tannins, quite the contrary, both substances are good for their mucous membranes and slightly astringent. The discoloration is gradually driven out by the due water changes. anyway. At some point, the root wont give off any more substances into the water. Moorwood is fully recommended for shrimp tanks. To avoid the discoloration, you can submerge the root a few days to weeks outside the aquarium in a separate vessel.

Moorwood can either be bought dry - then theyll bob up - or wet - then they will sink immediately. Wet Moorwood is usually preserved with salt, and should definitely be watered before use in a shrimp aquarium. Moorwood should not be scalded or boiled, as it may start to rot later in the aquarium.

Since Moorwood has spent quite a long time in the moor already, usually there wont be any bacterial films building up on it after placing it inside the aquarium.

Red Moorwood is a rather delicately branching aquarium root. Their appearance is reminiscent of peeled root branches and their color is light brown to reddish. The name stems from its similarity with Moorwood, but in reality, Red Moorwood hasnt even been nearby actual moors. The beautiful aquarium wood is actually the peeled rootstock of a rhododendron. The dry wood is relatively light and drifts in the aquarium first. How to keep it submerged until it is fully soaked and heavy enough is described in this article. Red Moorwood is excellently suitable for both, shrimp tanks and aquariums with ornamental crayfish. 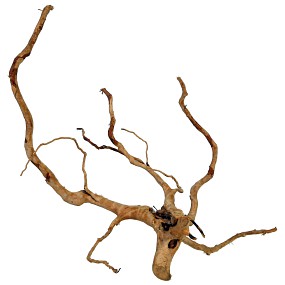 When the wood is still relatively fresh, a bacterial film, that looks like white cotton wool may form after insertion into the aquarium tank. This bacterial layer utilizes residual sugar, which is still in the wood, and disappears again without a trace as soon as the sugars are used up. Shrimp and snails are pretty keen on that harmless bacterial film, by the way. If you want the root to stay at the bottom when it is placed in the aquarium, water it separately until it is soaked and heavy enough.

Red Moorwood usually doesnt dye the water as much as Moorwood, because it doesnt contain as many humic substances and tannins. A slight, brown discolorations cant be ruled out completely, though.

Talawa Wood is a branchy wood from Asia, which nevertheless grew in relatively straight lines. SOme pieces still have pieces of bark on them, which gives them a beautiful, natural look. Shrimp find those barky spots particularly fancy to chomp on. The two-tone surface is achieved by sandblasting. This type of wood may develop the aforementioned bacterial film, which disappears by itself as soon as the remaining sugars in wood are used up. 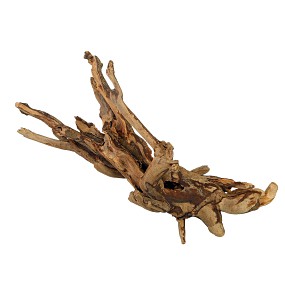 Talawa Wood colours the water pretty strongly at first, and it also tends to raise, which is why it should be watered for some time before putting it into the aquarium. This takes care of the bacterial lawn issue, too. When rinsing and watering, a rather intense odor may develop - but that is a normal thing to happen. This is counteracted by regular water changes in the watering tank. Pre-watered Talawa Wood is recommended without restrictions for shrimp tanks, unwatered Talawa can cause problems like bacterial bloom and lack of oxygen due to its inordinate nutrient output. Especially in aquariums comtaining shrimp, this can lead to difficulties - so Talawa Wood should always be pre-watered before it comes into an aquarium with shrimp.

Dark Iron is genuine driftwood, thats been in the water for quite some time and has been shaped by the elements. It sinks pretty quickly and looks very natural. On many pieces you can literally see the ravages of time gnawing on the wood, and they have the awe-inspiring radiance of a long time passed, which is especially popular in Japan. 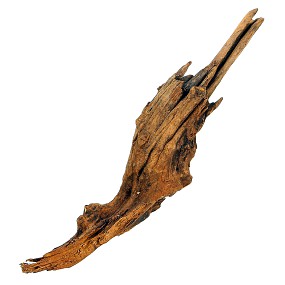 Since river wood has naturally already been pre-watered for a long time, no excessively strong water coloration and no pronounced occurrence of bacterial lawn is to be expected here, although a coating may well occur. In the shrimp basin river wood is unproblematic.

These aquarium roots are especially, well, gnarled and appear to be somewhat bizarre. Gnarly Driftwood sinks well, too. 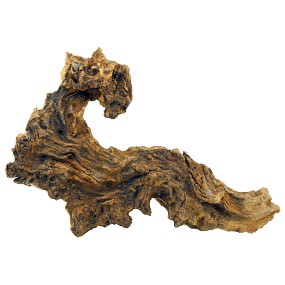 It can stain the water slightly and also foster the development of a bacterial lawn until the remaining nutrients in the wood are consumed. This wood is all-out recommendable for shrimp tanks, too.

Mangrove wood comes from Asia. It stains the aquarium water very strongly in the beginning and should be watered well - if a discolouration is not desired. Also, a cotton-like bacterial lawn may often grow in the beginning. Mangrove likes to float at first and should either be pre-watered or weighted down until its fully soaked and heavy enough to stay put. 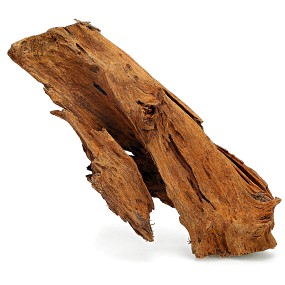 In shrimp aquariums, Mangrove is a tried-and-tested hardscape element and recommended without any restrictions.

Mekong Wood originates in Southeast Asia. This driftwood is heavy and sinks right away. Its shape is rather straight and less gnarly, well-suited for puristic, straightforward layouts. 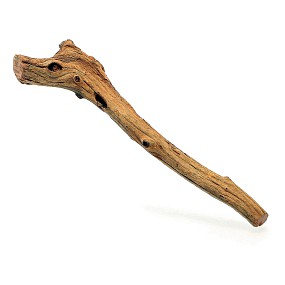 It colours the water only slightly and the bacterial growth stays moderate. This heavy driftwood is very suitable for shrimp tanks.

Mystic Wood is a bizarrly shaped aquarium wood which is exceptionally attractive and opens the door to many creative designing possibilities. 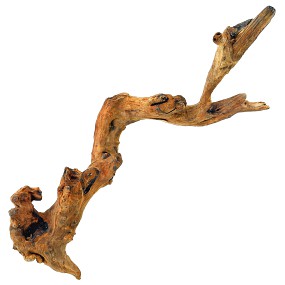 This wood can also be used well in shrimp aquariums as it behaves neutrally.

In the early days of shrimp aquaristics thereve been reportedly many problems with the instantly-sinking, gnarly, hardly branching Mopani wood. Especially in older books and forum posts, warnings can be found about shrimp dying after Mopani wood had been introduced into the tank. This included acute but also gradual poisoning. In the first case, the shrimp died instantly, in the second case only a few shrimp died by and by. There was a lot of speculation and the phenomenon was blamed on the Balsam Tree (from which the Mopani roots are taken) growing on soil polluted with heavy metals etc. etc ultimately it came to light, that the reason was something entirely different: the two-coloured Mopani wood is partially sandblasted! Since some manufacturers used sandblasting media not suitable for invertebrates it came to symptoms of poisoning. Often smallest metal fragments could be found in the nooks and crannies of the wood! Nowadays the manufacturers are used to shrimpkeeping, and poisoning has been a thing of the past for a very long time - even with other sandblasted woods, so its safe to say that Mopani is shrimp-proof. Nevertheless, the rumor that Mopani is generally dangerous to shrimp persists. After all, the internet never forgets. Mopani roots can initially stain the water slightly, bacterial lawn can also occur.

Like Mopani, the imposingly structured savannah wood from Africa belongs to the hardwoods, too. It sinks immediately and therefore does not need to be pre-watered. Savannah wood stains the water minimally and may facilitate bacterial lawn.

The Bonsai Tree is by no means a genuine Bonsai, even though the name implies it, but rather a specifically shaped root and artistically designed branches. So no real mini tree had to die for this product! 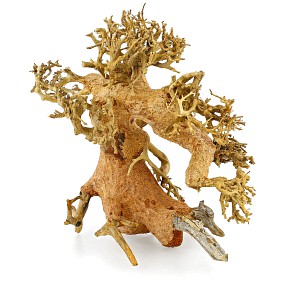 All materials used are aquarium-proof, tested and deemed suitable for shrimp. In the beginning, a bacterial film may develop, but this is happily grazed off by shrimp and snails. Theyll find a particular high amount of surfaces to graze on in their fine junctions. Bonsai Trees can be easily greened with mosses, which is a particularly good thing for baby shrimp, as they can find hiding spots in there.