Fixing moss correctly in the aquarium

Mosses are very popular aquatic plants for the aquarium, especially in shrimp aquariums and among aquascapers, because they create a great natural environment. It is particularly effective to attach aquarium mosses to decorations such as stones or driftwood. In recent years, gluing with a suitable plant glue has become very popular. Unfortunately you'll often end up with unattractive glue residues on the hardscape, and not all moss species are suitable for gluing. Classically, mosses are attached to objects with a suitable yarn, which creates a better look. In this article we'll explain how to tie them down best.

Material for tying down aquatic mosses 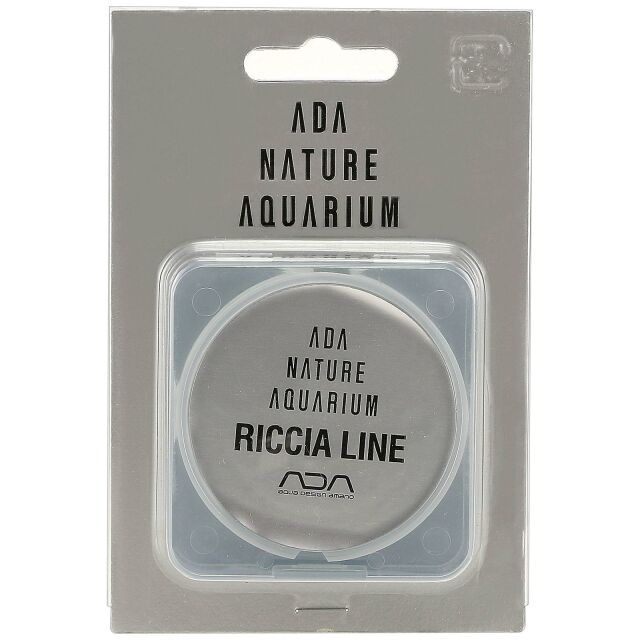 What things do I need to tie down aquatic mosses? Well, this of course includes the moss itself, which in case of an in-vitro portion should first be freed from any residual nutritional gel. Furthermore you need suitable yarn or a corresponding thread for the actual tying. Basically you have to differentiate between two different groups of binding material: you may use durable yarns made of polyester or nylon, which will remain in the aquarium permanently or at least for a very long time. An example would the Riccia Line by ADA (see photo). This type of yarn is mainly used for mosses (or other aquatic plants such as Riccia fluitans), which cannot form holdfast roots and therefore do not adhere to the hardscape over time. Further down you will find some more examples.

There are also yarns available, which decompose under water over time. This is the case, for example, with conventional cotton yarn. Unfortunately, the thread will dissolve before the moss has properly grown, though. The result is rather unwanted, because the moss pads will separate from the substrate, float up and spread with the current in the aquarium. For this reason one should not save at the wrong end here and rather fall back on a somewhat more durable material. The manufacturer ADA offers a material which decomposes long after the moss has grown on with the product Moss Cotton. Thus two birds can be killed with one stone: excellent-looking, firmly grown moss and no more thread ends and residues remaining in the aquarium.

As a further aid, you should have some scissors ready and a suitable container that can hold the thread reel.

In general, you should decide in advance whether you want to tie down your moss inside or outside the aquarium tank. First of all: doing it inside the aquarium is often already very tedious, since the decoration materials are usually already firmly built in and can no longer be turned around or moved aside. In most layouts you simply don't have enough room to tie the moss to the hardscape without obstructions. If an aquascaper wants to attach moss to hardscape that is already placed inside the aquarium tank, he should consider falling back to a suitable plant glue. Alternatively, you can also bind the moss to smaller fragments (such as thinner root branches or flat root pieces) and then glue them onto the existing hardscape.

Tying down moss is much more comfortable when everything is freely movable and you can work outside the aquarium tank.

First of all the "workstation" is set up. If you work with damp materials, it is advisable to use a towel as a padding to protect the furniture from moisture. Place the thread reel in the container mentioned earlier (a glass or a cup) and pull out a length of thread. This way the thread reel can unroll without any problems, you won't have to hold it and have your hands free at all times. The thread reel stays put and cannot roll away or even fall off the table. 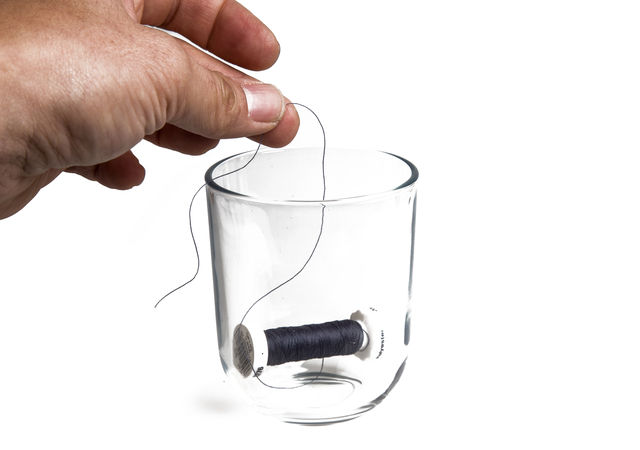 Tying down the moss

Subsequently the moss is tied onto the desired object. In our example we would like to tie Riccardia sp. to a piece driftwood. The moss to be tied must first be portioned appropriately. This can be done by cutting or plucking it apart with your fingers. 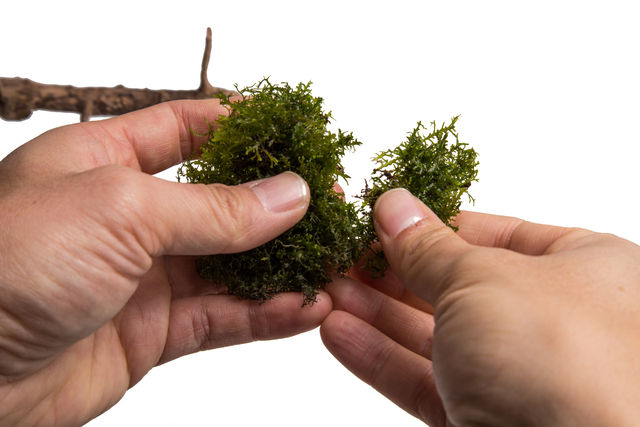 Take the piece of driftwood and tie the thread to one end with a double knot. You should leave a longer piece of yarn poking out from the the knot. This will become important later for the final knotting. 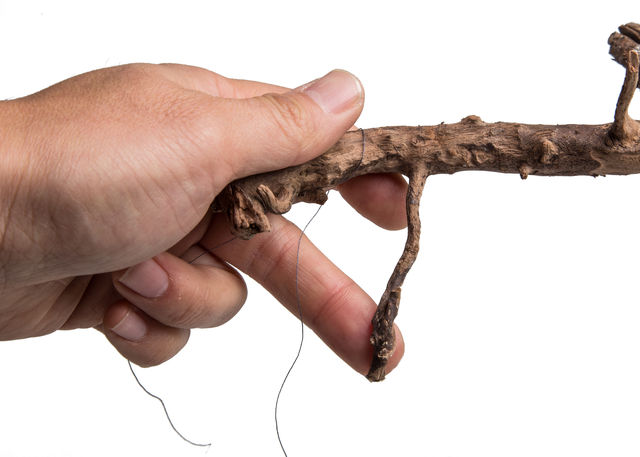 Then the actual winding process begins: A small portion of moss is placed on the root, wrapped with the yarn in tight loops. 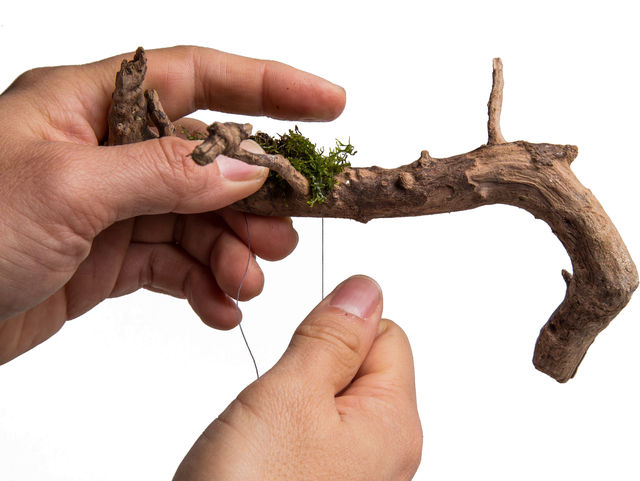 Step by step you'll cover the entire desired distance along the driftwood in that manner. The yarn should be looped closely and tightly. When you have reached the end, loop the entire stretch backwards again until you reach the starting point. 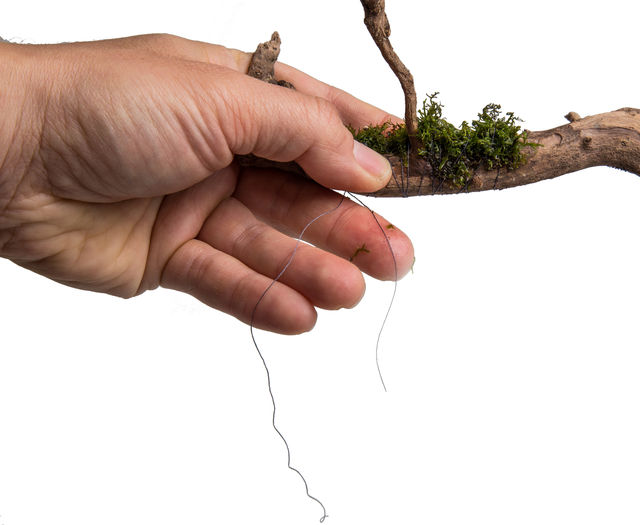 After arriving there, cut the thread but again leave a length of yarn. The two ends are now knotted together. If the knot is really tight, you can cut the loose ends off close to the knot. 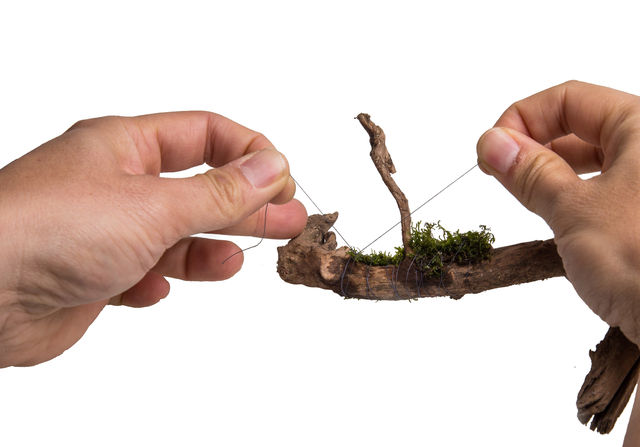 Now the piece of wood is properly greenscaped and can be used in the aquarium. It will look particularly natural, if you cover only the upper side of the hardscape as we did in our example. 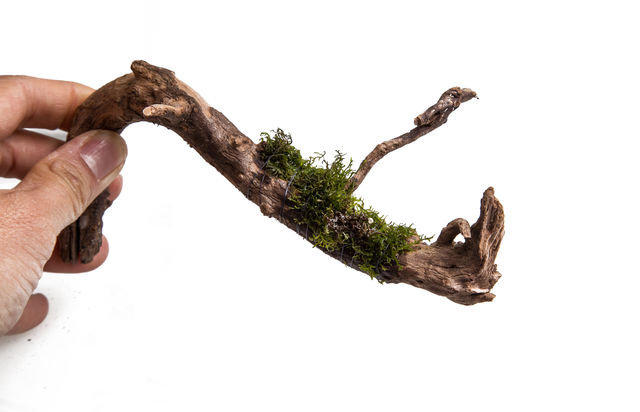 For some mosses and aquatic plant types, the method of tying them down is particularly purposive, as they may not be able to develop holdfast roots that attach them to the hardscape. They would therefore soon leave their designated spot and start floating. For these plants the fixation with yarn is the right choice. In conclusion we offer a list of such aquatic mosses and plants that are predestined for this procedure. Of course, all other types of moss are also suitable for tying down.