Algae in the cycling phase

In this article, we want to use a couple of examples to show you which algae phases a newly established aquarium goes through in the early days. Especially the many newbies in the hobby are shocked by the emerging algae growth during the cycling phase. Here again, it should be clearly stated that algae are something completely normal at the beginning! Although their growth rate at this stage might look quite overwhelming: wih the right measures and above all predators in sufficient numbers, algae can be eradicated in a very short amount of time. You can find some fundamentals about algae, their identification and possible control options in this article.

A freshly set-up aquarium always looks pretty clean and tidy at first. You should make yourself aware, though, that this is definitely going to change. Even if aquascapes are making the aesthetic claim of being a living work of art and you have those pristine, glossy pictures of only such perfect layouts from the internet or aquascaping competitions in mind: an aquarium is and remains a dynamic element! Things are changing, and the small ecosystem is going through different natural and biological processes. 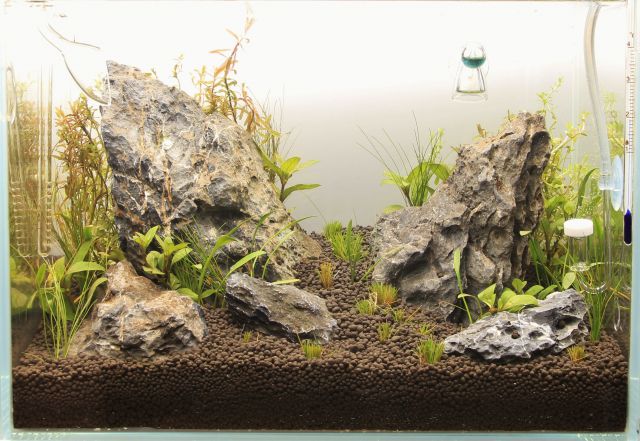 First and foremost, the visual impression of an aquarium depends on the care of the owner. Those "Final Shots" of aquascapes, which are then shown on the Internet and in competitions, have been meticulously prepared by the owner, investing hours and hours of work. Such a photo is not just a snapshot, but it tries to get as much "optical power" out of its aquarium as possible.

Nobody ever sees pictures of such pieces of art during the cycling phase. We want to change this by clearly showing which changes an aquarium is going through during this time.

Some important, microbiological things are happening during the cycling phase, that are not visible to the naked eye. To crank up the so-called nitrogen-cycle, certain bacterial strains need to develop first. In an ecosystem such as an aquarium, organic waste is produced, for example, by dying plant parts, feed leftovers and excrements of the inhabitants. These various, organic compounds, which contain nitrogen, are at first processed into ammonium by bacteria and fungi. So, generally theres a significant ammonium-peak in the cycling phase, since those bacteria find suitable food as the very first and can thus procreate pretty well. Nitrosomonas-bacteria then process ammonium into nitrite, which results in a nitrite-peak in the end of the cycling phase. Finally, nitrite is converted by bacteria of the genus Nitrobacter into nitrate. While ammonium and nitrite can be toxic to aquarium inhabitants, nitrate does not pose a threat to fish and invertebrates and is furthermore (just like ammonium) absorbed as a nutrient by aquatic plants. So, before you let some inhabitants into their aquaristic home, the cycling phase - in terms of nitrification - should be over and neither ammonium, nor nitrite should be traceable anymore.
A good way to speed up the cycling phase, is to use bacteria additives. Here many useful bacteria are supplied in sufficient quantity directly into the aquarium.

Most purchased aquatic plants are still in their landfrom (emersed) and need some time to morph into their underwater form (submersed). To better understand the background of that, we recommend reading this article (in German).
Especially the conversion of the aquatic plants and of the whole microbiological system is exploited by various algae species due to a lack of competition during the cycling phase. Usually the aquarium stays pretty clean during the first week. But from the second week onwards, the first brown algae coats will come up. Brown algae. As things develop, more and more green thread algae and green coats will come along. 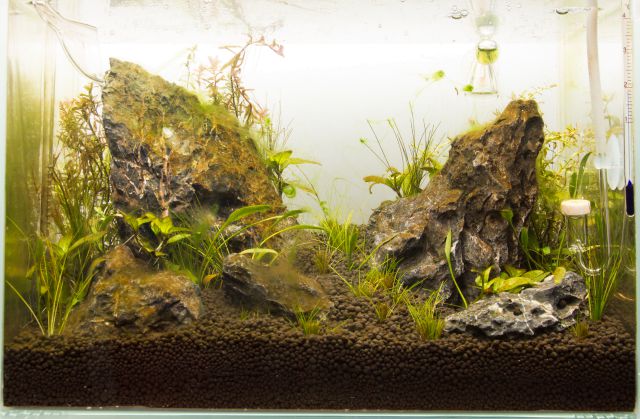 The nano aquarium after ten days. diatoms- and thread algae, as well as some green algae coats have developed. The plants are still busy with the change from their emersed to submersed form and show only restrained growth.

As already described above, it is normal for algae to spread during this phase of an aquarium life. Also, the equilibrium between plants and algae is not yet established. It is therefore all the more important to plant densely right from the beginning, preferrably with fast-growing species like stem plants. The temporary use of floating plants or those that bob right below the surface such as Hornwort are popular methods to boost the initial plant mass.
In addition, the aquarium plants should also be sufficiently supplied with nutrients, so that they can grow healthily. How to properly feed aquatic plants is described in this article. Additionally weve got an article here, covering the fertilization during the cycling phase in detail.

As soon as the water values permit (ammonium and nitrite not traceable), kannst Du die you can deploy the first algivores. In this article the various algivores are presented in detail. In addition to having predators suitable for the various types of algae, having a sufficient number of them is extremely important! If you have a possibility to migrate animals, a complete overkill of algivores (like Amano shrimp) is a good alternative. Later you can divide the excess stock up into other aquariums. 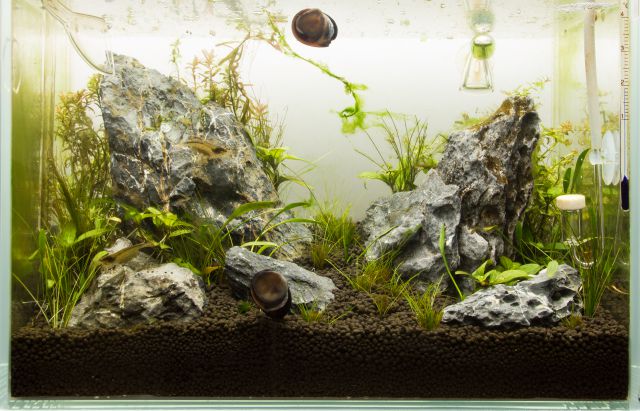 In only a few days, predators reduce the amount of algae very drastically.

Especially Amano shrimp are very efficient algae-eaters, especially with green thread algae, which come up more often during the cycling phase. Neritina or Clithon snails are a good choice against algae coverings of any kind. These graze the coating off of decoration and panes. 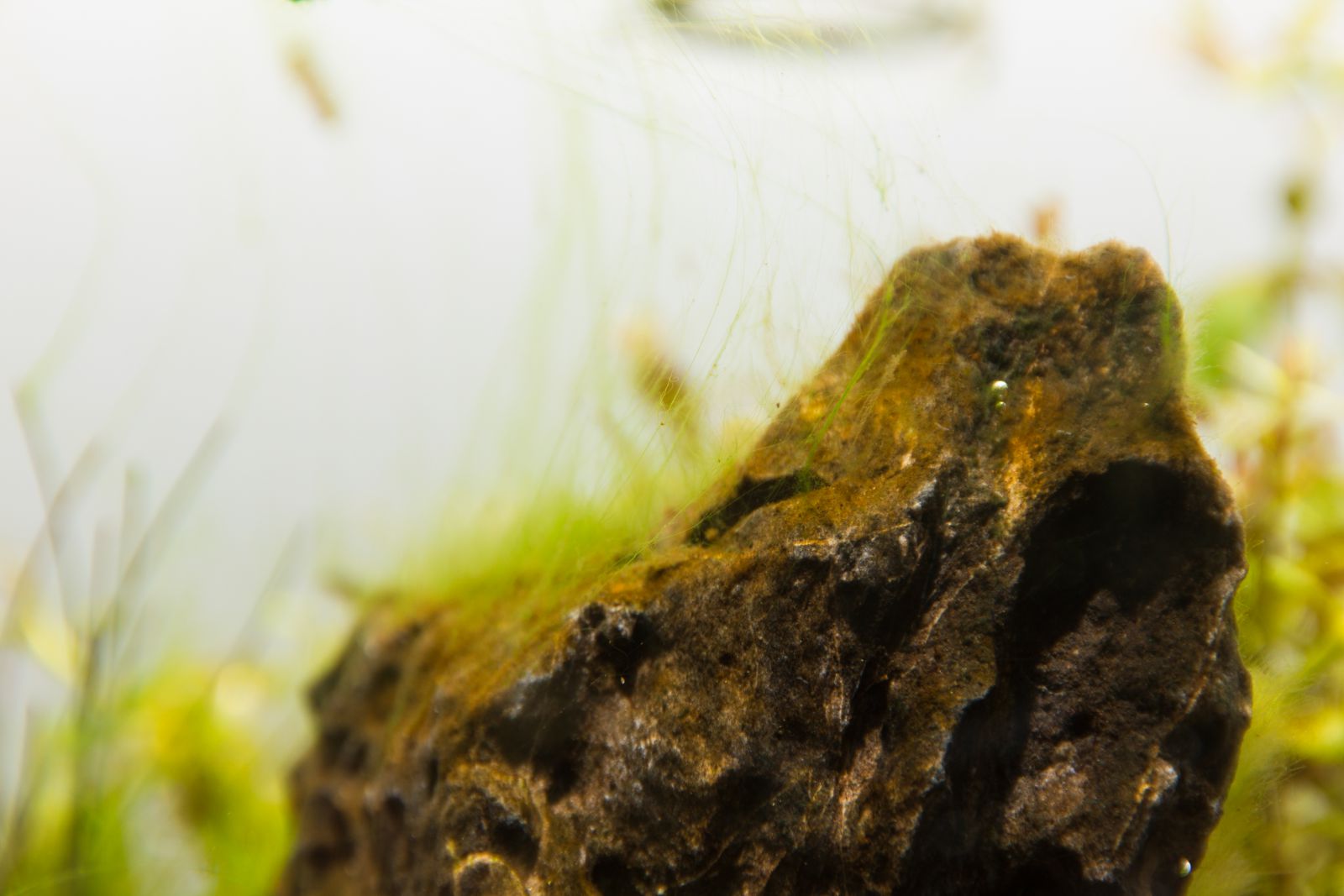 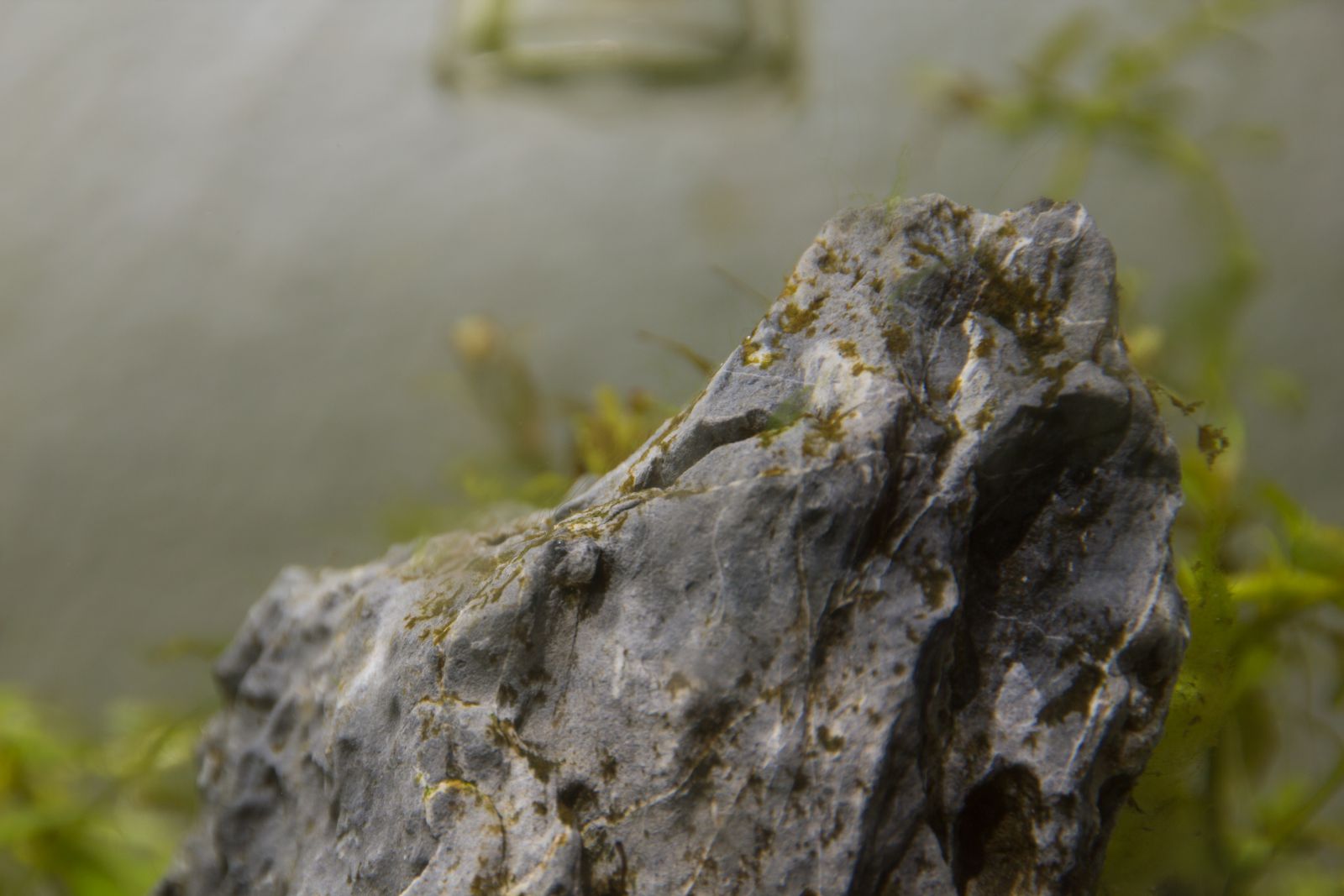 Good to see in the close-up: the comparison before and after the deployment of snails and shrimp.

Loose algae can also just be sucked away with a hose when performing the regular water change. Harder coatings on the panes can be removed with a scraper. With thread algae in particular it is very normal, that they come up again after having manually removed them. Its dedication and endurance which make it count here, until theres a better plants-algae balance after the aquarium has been in its location for a while. In cases of extreme emergency you can resort to targeted control measures. A A treatment with Behandlung mit Easy Carbo needs to be mentionend in severe cases of BBA- and staghorn algae and with hydrogen peroxide in cases of green thread algae and cyano bacteria.

An example of thread algae infestation during the cycling phase is documented in the following photo series: 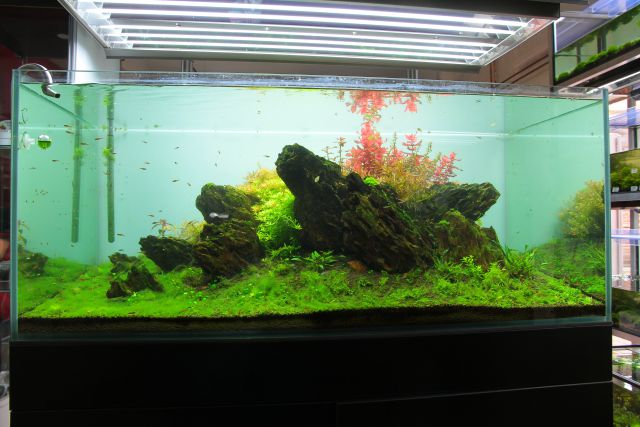 Visible thread algae infestation in the ground cover during the cycling phase.

The aquascape at the age of a few months. The plants grow lushly and vitally, no trace of algae to be seen anymore.

Diatoms can visually spoil an aquarium, too, but are only a short-term problem. Here is an example:

Extreme infestation with diatoms during the cycling phase.

The same aquascape after a little more time in its location.

Another example of a 360 liter aquarium. Different types of algae are represented: 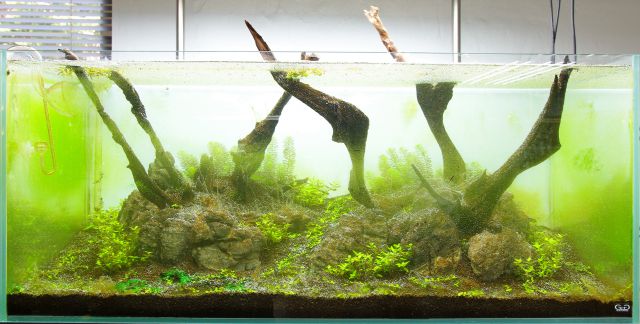 Infestation with algae during the cycling phase.

After a little more development time, the Aquascape is as good as algae-free.