"Nano fish" or "mini fish" is the trade name for many smaller fish species. Those fish are not always suitable for permanent keeping in a nano tank with less than 54l volume. The size of such species like Rasbora or Boraras is quite manageable with two to three centimeters, but nevertheless, they are swim-happy schooling fish who need an appropriate tank size and wont feel comfortable in less than 20l of water. We present some small species of fish here and also those that you can keep in a nano aquarium. 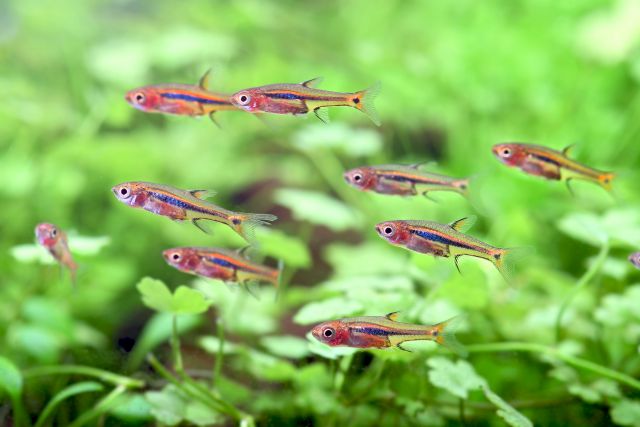 Basics for keeping fish in a nano aquarium

Even in a nano aquarium, a functioning ecosystem is important for the inhabitants living in it. In this respect, you should pay attention to good technical equipment, (filtration in particular). Furthermore the fish need aquatic plants, suitable substrate and enough decoration like stones and driftwood. All these things provide colonization surfaces to important bacteria where they multiply and contribute to pollutant degradation. Since oxygen is required for this, a good flow and a proper movement of the water surface is needed to improve the gas exchange between water and ambient air. Additionally the aquatic plants and suitable stones or driftwood provide oxygen and hiding places. This so-called hardscape also improves the overall structure of the aquarium layout. 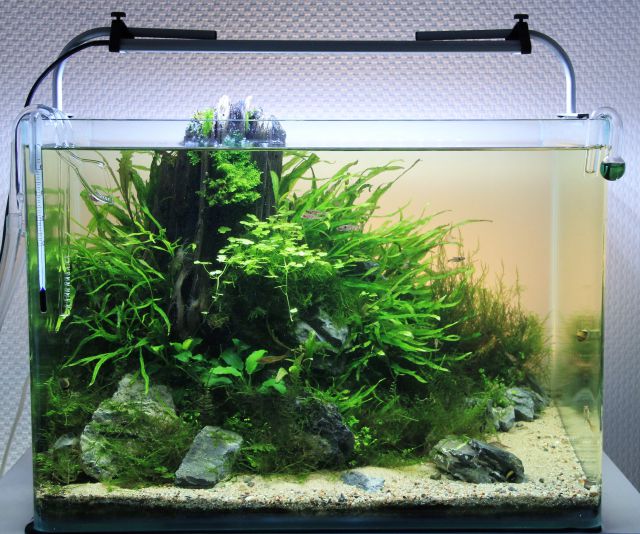 A weekly water change should be carried out as a regular care measure. This way accumulating substances are removed and fresh water is supplied. We recommend a water change of at least 50% of the total amount of water in the aquarium, which can be done pretty well with nano aquariums since the total volume is not that high in the first place.

As a rule of thumb a volume of 30l should not be undercut when keeping fish in a nano aquarium, smaller tanks are suitable for keeping invertebrates like snails and shrimp. The format is decisive as well: the popular Nano Cubes are less suitable for keeping fish due to their cubic shape, than rectangular tanks which offer a better edge length (recommended: 40 cm upwards) and thus more swimming space for the fish. 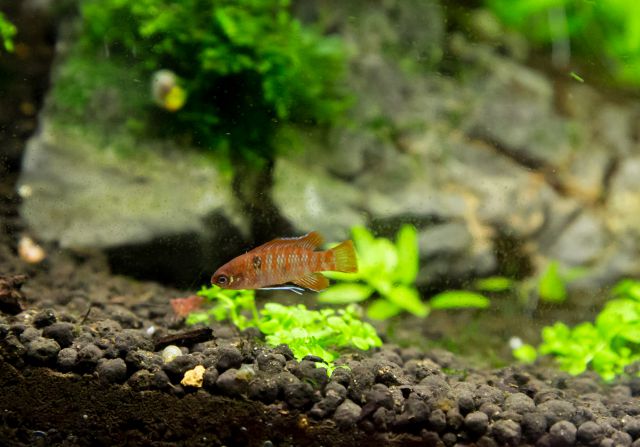 This smaller percoid comes from India and is regularly offered in trade. It grows to a maximum length of 3 cm. The males are colorfully red and blue patterned, the females are gray. Since this tiny cichlid isnt a very active swimmer, he can even be kept in a nano aquarium. It should be noted that especially the male animals are territorial and will defend it. Female Dario Dario need sanctuaries. Accordingly, you should calculate with about 30 liters aquarium volume per fish. Unlike South-American cichlids, Dario Dario from India can be kept at room temperature. The animals feed exclusively on live food, which should also be small in size. Freshly hatched Artemia nauplii are an option here. In addition, if there are dwarf shrimp in the aquarium, their young are potential prey for the cichlid. This should be kept in mind in the composition of the stocking. 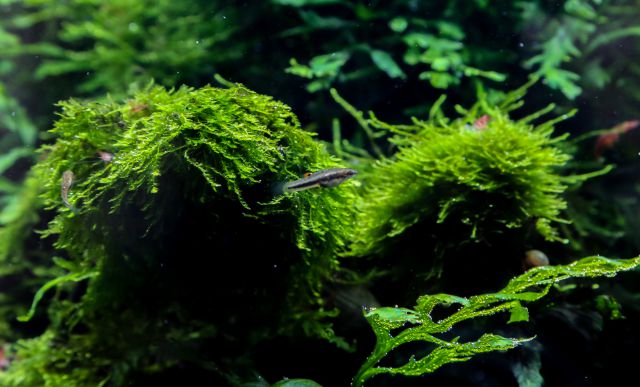 Among the live-bearing tooth-carp, Heterandria formosa is the smallest. Male specimens are only about 2 cm small, the female animals, however, are almost twice as large. Originally those fish came from the south of the USA. In Germany, unfortunately, they are not often available in stores. The least Killifish is a fairly active fish and should be kept in a small group, preferably with several females for one male. In this respect, the aquarium should not be too small (larger than 30 liters) and have enough swimming room as well as retreat options. The latter can be realized by a dense planting in selected places. Similar to other livebearers, the least killifish feels better in harder and alkaline waters.

Epiplatys annulatus is an african clown killi that only grows to a size of about 4cm. Striking is his black and white striped pattern - the males also have a colorful tail fin. The animals usually stay near the surface of the water. Since clown killi are surface-oriented ambush predators, a design with floating plants comes to mind. Here, the aquarium fish find cover and the floating plants also will keep them from jumping off. For breeding efforts, the water should be soft and acidic. Since the fish need a little more swimming space, an edge length of 50 to 60cm is recommended. 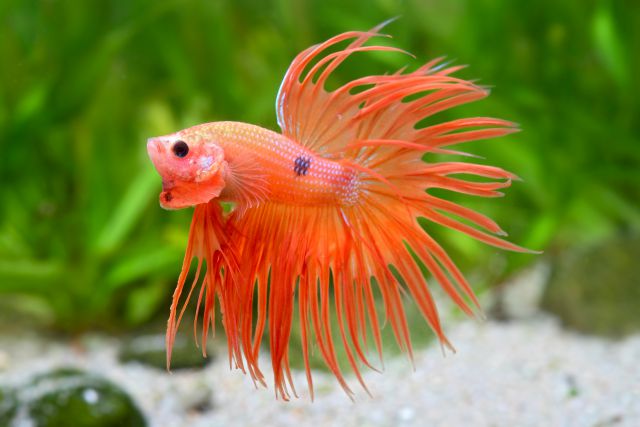 A single betta can be kept in a nano aquarium. The tank should have at least 30 liters of volume. The aquarium should be densely overgrown with aquatic plants, which offer the fish hiding places and "hammocks" for sleeping. The use of floating plants is also suitable here. Betta prefer a calm water surface, so the flow in this area should be as weak as possible. A dark substrate is an advantage, but not a must. In older literature, the harem-keeping of several females with a male is repeatedly recommended for betta, but more modern findings have shown that the stress level of such a harem is very high. The best way to keep the Betta splendens is as a loner. 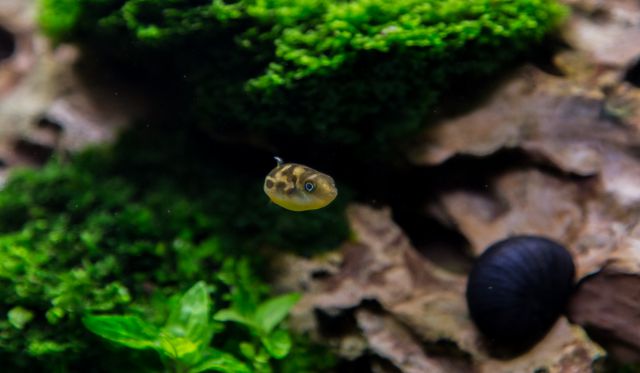 The dwarf puffer, commercially available under the name Carinotetraodon travancoricus has its origins in India. It is described as a pure freshwater puffer fish (a salt addition to the aquarium water is therefore not necessary) and prefers soft and acidic water. Its maximum size is about 3 cm. As well as larger species of puffer fish, this aquarium fish is a food specialist and feeds mainly on small snails such as ramshorn snails, physidae or planorbius. Experience shows, that species with lockable chambers (Malaysian trumpet snail , neritina, clithon) remain mostly unbothered. Alternatively, some specimens can also get used to other live and frozen food. Even young shrimp are on the menu in a joint socialization. If the puffer doesnt get enough food, he will attack the other aquarium inhabitants (other fish, shrimp), where he usually attacks eyes and fins. Dwarf puffers can be kept in bigger nano tanks. For a couple a tank volume of at least 50l should be estimated. 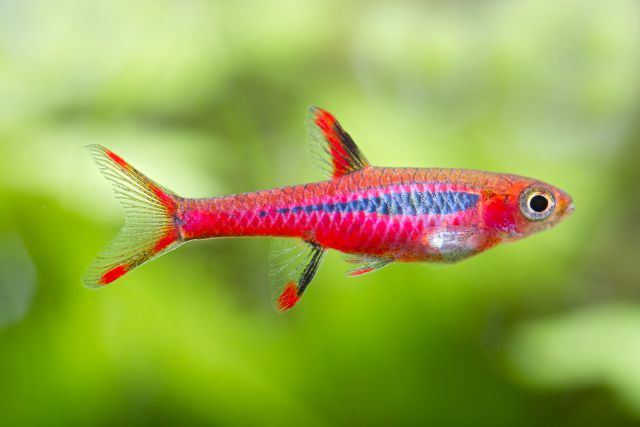 If your tank size goes along the lines of almost having a standard aquarium with an edge length of 60cm, a smaller school of dwarf rasbora can be considered. The bigger Scaper´s Tank with a volume of 55l is suitable for such a stocking. Small types of Rasbora such as micros, merah, brigittae or urophthalmoides are advisable - neither of them are very active swimmers. The article "Cichlids in a planted tank" will offer you more information about those fish species.

Small labyrinth fish of the genus Parosphromenus sp. are well-suited for keeping them as sole population in a densely planted nano aquarium. Parosphremenus are Parosphremenus are very quiet, rather shy aquarium fish, which are primarily in their hiding places. The lighting situation should be kept rather dark. When brighter lighting is used, shaded areas can be created by the use of floating plants and driftwood. There should be as little flow as possible - especially at the water surface. Parosphremenus are used to extreme water values and sometimes require black water-like conditions with very soft and acidic water and many humic substances. The animals should be fed exclusively with small live food. Please note, therefore, that these aquarium fish are slightly more difficult to care for and not really suitable for beginners. But the aquarist is rewarded by very unusual fish with an interesting social and maternal behavior.

Invertebrates in a nano aquarium 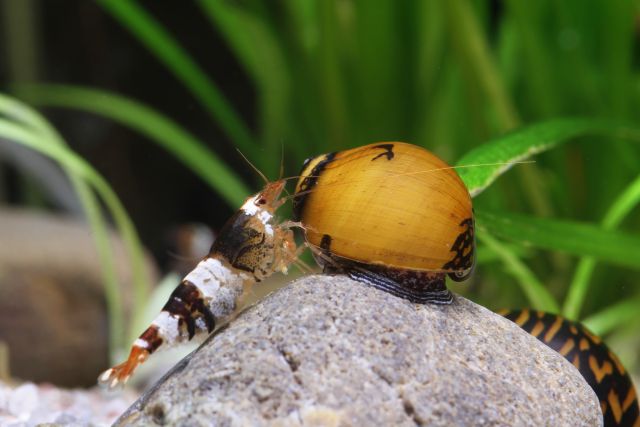 Invertebrates such as most snails dwarf shrimp are also very suitable for keeping in a smaller aquarium with about 20 liters (for shrimp); a well structured 30l tank with many hiding places (for dwarf crays) or a 10 liter tank with aquatic plants (for smaller snails such as post-horn snails ). Both snails and shrimp or dwarf crayfish are not just eye candy in a nano cube but they also enrich the ecosystem of the aquarium, as they are excellent salvors. Sludge, dead plant parts, but also dead animals are on the menu for these invertebrates. In addition, some of them feed on various species of algae and keep the aquarium clean. A little overview of the various types of shrimp can be found in this article.