Nitrate is the last link in the denitrification chain of the so-called nitrogen cycle. It is part of a functioning ecosystem and serves to decompose and transform organic pollution in an aquarium. In this process, ammonium is converted into nitrite and finally nitrite into nitrate by various bacteria. While the two precursors ammonium and nitrite can be dangerous for animal inhabitants of an aquarium, nitrate is first of all a non-toxic substance. The ideal nitrate concentration The ideal content of nitrate is set to different levels in the various aquaristic varieties (freshwater, saltwater, breeding, shrimp keeping, planted tanks). In a regular community aquarium, slightly higher values in the range of 50 to 100 mg / l NO3 (nitrate) are still tolerable, depending on the type of fish, even higher concentrations might still be well tolerated. If this limit is considerably exceeded, we recommend the aquarist to think about suitable countermeasures and to investigate the causes. An extremely high nitrate content is primarily to be seen as an indicator that the ecosystem in the aquarium is not working properly or is overloaded. Basics like filtration, maintenance or feeding need to be reconsidered.

Nitrate in a planted aquarium

Nitrogen in the shape of nitrate is an important nutrient for aquatic plants. If the growth conditions are good, nitrate - among other elements - is consumed by the aquarium plants. In densely planted aquariums or aquascapes, the nitrate consumption can get so high, that a dedicated nitrate fertilizer has to be added, to prevent deficiency symptoms and growth defects. In some cases, an aquarium with many fast-growing plants can have a daily consumption of up to 5 mg/l NO3, meaning that a plant aquarium should have a nitrate concentration of 10 to 25 mg/l NO3. Significantly higher levels are not detrimental to aquatic plants, but there may be a change in colour, e.g. some reddish plant species tend to turn a greener hue.

Nitrate in a fish breeding tank

In aquariums with a high stocking density, as is the case in breeding tanks, the ecosystem is more concerned with reducing organic pollution. If factors such as excessive feeding, insufficient filter placement and having only a few, rather slow-growing plants come into play, increased nitrate and phosphate concentrations may arise. In aquariums focused on the breeding of animals a too high nitrate concentration is not at all desirable. Although nitrate is not a toxic substance per se, in high concentrations it can cause problems during the rearing of fish. This may probably be due to the fact that any salt (nitrate in this case) above a certain level may have osmotic effects on the water balance of an animals body, adversely affecting it.

Nitrate in a shrimp tank 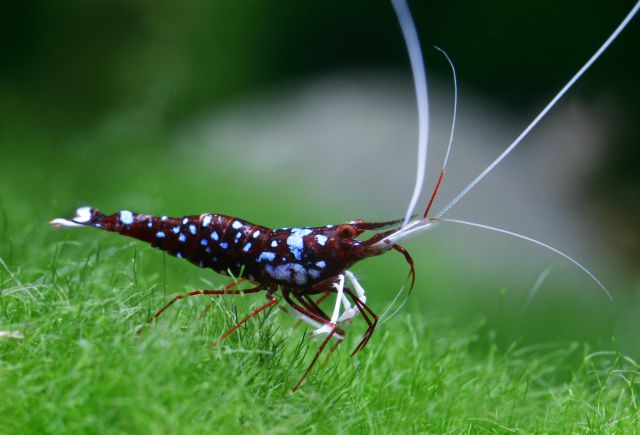 The content of nitrate in breeding tanks of dwarf shrimp plays a special role. For successful moulting, they need enough iodine to form the molting hormone crustecdysone. However, an excessively high nitrate content inhibits the absorption of iodine by shrimp. As a result of this, too little molting hormones are formed and failed or missing molts may occur, ending in the death of the animals. In particular, dwarf shrimp from very clean habitats (Bee Shrimp and similar, but also the Sulawesi shrimp) are much less tolerant towards nitrate than those from more nutrient-rich habitats such as Neocaridina Davidi. In high-breeds, a maximum content of 15 mg/l nitrate is desired, more resistant species can tolerate values up to slightly above 25 mg/l.

For nitrate reduction and to keep the water pollution caused by organic compounds low, we recommend a generous and regular water change. If these care measures can not be held up or are insufficient, you may switch to alternative options. Here are some ways to reduce nitrate.

Fast growing aquatic plants in particular have a high demand in elements such as nitrate and phosphate among other nutrients. Thus they can contribute to the lowering of nitrate and phosphate concentrations. In addition, the aquarium plants offer great natural hiding and spawning opportunities for animal inhabitants such as fish and shrimp. In addition, oxygen is produced by the photosynthesis process, which also benefits the aquarium occupants. In this respect, the introduction of aquatic plants is a very natural means of reducing nitrate, which additionally supports the aquariums complete ecosystem. To ensure an optimal growth of your aquatic plants it is vital to supply them with all nutrients needed. More detailed information on this can be found in our article "fertilizing a planted aquarium".

Use of biological filter media

Equipping the filter with so-called high-performance filter media benefits the settlement of nitrate-degrading bacteria. Biological filter materials such as JBL BioNitrat Ex or Oase Hel-X have highly porous properties, offering a lot of surface for the settlement of useful bacteria. 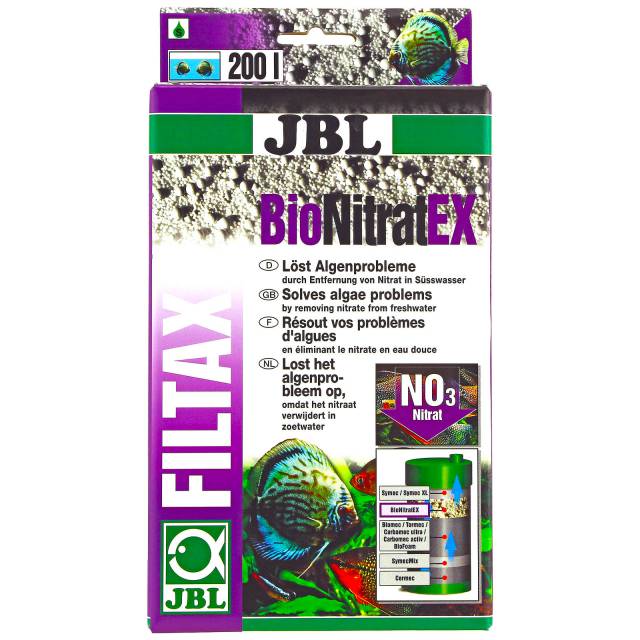 Often these filter media are made of sintered glass or ceramic. An immediate reduction of the nitrate content does not take place, however, as the bacteria first have to develop and multiply. This measure has more of a long-term effect.

Chemical filter media such as JBL NitratEx which work under the ion-exchange principle, are suitable for an immediate removal of nitrate. These resins bind nitrate ions and usually release chloride ions to the water. However, their exchange capacity is limited, so the nitrate content in aquarium water should be checked regularly with a water test. As a rule, these resins can be regenerated well with a treatment with common salt. 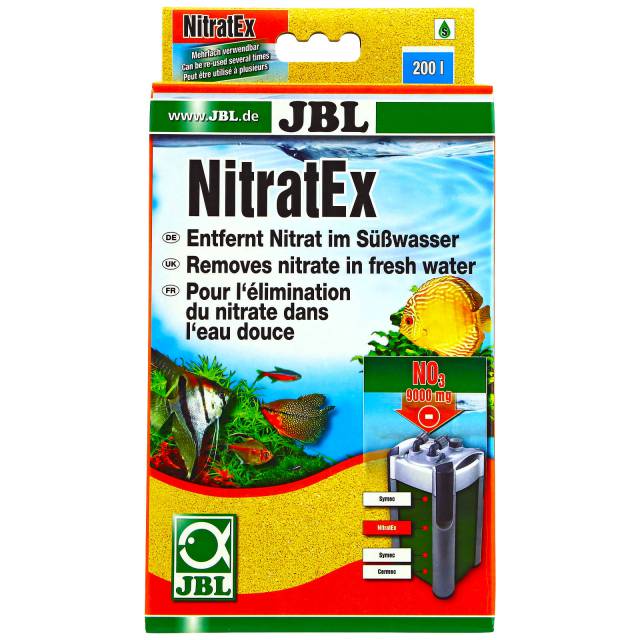