In addition to energy-saving LED lighting with diodes emitting pure white light, aquarium LED lighting systems that are in addition equipped with so-called RGB diodes increasingly have entered the trade. Those lights are equipped with additional colored LEDs (mostly blue, red and green). What are the advantages and disadvantages of RGB lighting? We'll have a closer look at these lighting systems for aquaria in the following and provide you with assistance with your purchase decision.

First of all, white is not always white. In the range of white tones, there are different color temperatures. With many LED lights for the aquarium, you can choose whether you want a warmer, a neutral or a cooler white. The color temperature of the white tone is precisely defined by the unit kelvin (K). You can find more information on this topic in our article on "Color temperature as a design element".

LED lamps with diodes emitting pure white light only have the great advantage of a significantly higher light output compared to lamps with RGB modules. This means, first of all, that these lamps have a higher brightness, which is expressed in a correspondingly higher number of lumens. If you now add the power consumption in watts, resulting from the calculation of lumens / watts you will get the so-called light output. This will tell you to what extent a lamp is particularly (energy) efficient. For a more in-detail look we recommend reading our article on "The lumens-per-watt rule of thumb for aquarium LED lights".

The letters RGB stand for the three basic colors red, green and blue. The term "RGB LED" refers to LEDs that emit light in these colors. In freshwater aquatics, mostly blue and red LEDs are used to create certain light moods. Blue LEDs are popularly used as moonlight or to create a dusky mood, whereas red LEDs are excellent for simulating dawns and the rising sun. A daylight simulator or LED controller is particularly suitable to create these special moods through light effects. However, setting the mood isn't the only use of RGB-LEDs. Red, blue and green LEDs are in popular use for standard aquarium lighting since these light temperatures greatly enhance the colors of the objects inside the aquarium. The colors of aquatic plants appear much more rich and vibrant, red fish, shrimp and of course red-leaved stem plants look much flashier. Likewise, the color of blue aquarium animals or darker stones is also emphasized.

To vary the white tone or the color temperature of the continuous lighting, red or blue LEDs are often added to the white LEDs. The prerequisite for this is an LED lamp in which the individual colors can be switched on separately by means of a controller. If you add some red to the white light, you will get a warmer white. Blue, on the other hand, produces a cooler color temperature. For example, such a lighting scheme can be realized with the matrix line from daytime, for example.

In comparison with lights consisting of pure white LEDs only, lamps with additional RGB modules emit considerably less lumens. The reason for that lies in the use of colored LEDs. The human eye perceives colors such as blue or red as darker, and green and yellow as much brighter (see graph).
If you want to learn more about the term lumen: We have a corresponding article worth reading in our Aquascaping Wiki. 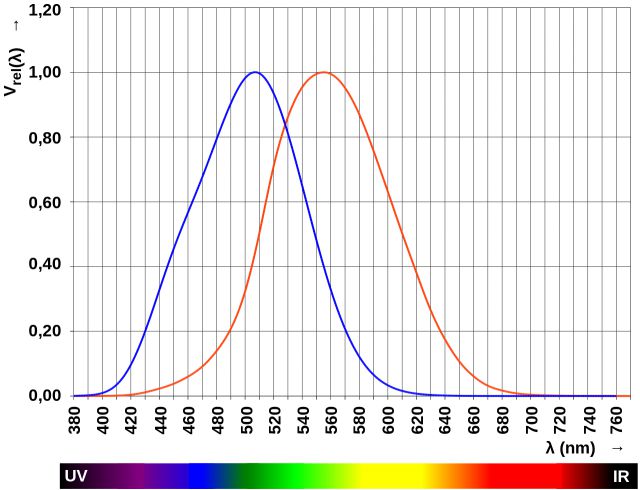 As a result, the human eye will always perceive aquarium lamps with RGB LEDs as less bright. This applies to both the lumens as to a visual comparison sample. If we now add the power consumption in watts, we will find that the light output in lumens per watt performs correspondingly poorer. To achieve a comparable brightness, you need a much more powerful lighting system. So if your main goal is to save electricity with aquarium LED technology, a lighting system with pure white LEDs is more advisable.

However, the advantage of RGB lighting is definitely in the color accentuation. As described above, the hues of colored objects in the aquarium, such as colorful fish or invertebrates and aquatic plants, are clearly accentuated. Especially red aquatic plants as well as red and blue animals shine in a very special light and display a much more intense color. For example, in the marine sector, where fluorescence plays a major role, colored LEDs have become indispensable

In the following experiment, a still life with fruit was photographed under different illuminations. At first, a Twinstar Light LED 600-ES with RGB components was used. 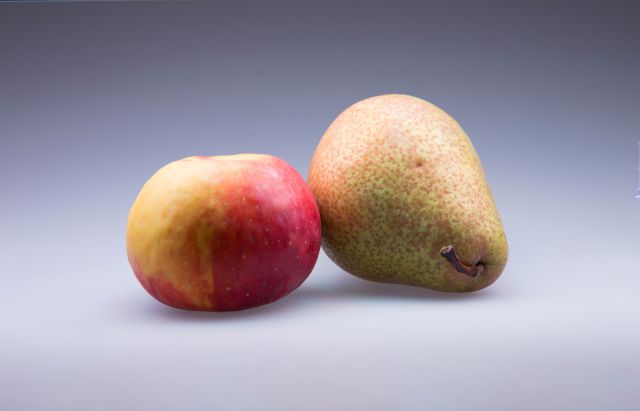 In the next picture, the fruit was lit with a daytime cluster, which is equipped with pure white LEDs of the color Ultra White with 8,000 Kelvin. 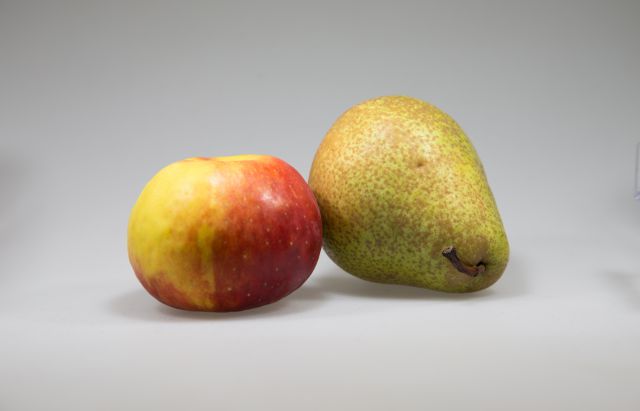 The direct comparison is striking: Under the pure white LEDs, the colors appear to be much more yellowish. The green and yellow hues of the fruit are much more prominent. The light gray background is quite neutral. There is no yellow tinge under RGB lighting, though. The colors look more balanced and more intense, and the red (seen in the apple) appears to be stronger. When you look at the background, you can easily see how the RGB lamp illuminates a light-colored area. The addition of red and blue results in a darker white with a nuance of the mixed color violet.

In summary, we can say that LED lights with only white LEDs have their strengths in energy efficiency but RGB lamps definitely score in terms of color accentuation. Thus, every aquarium keeper, no matter in which area their focus may lie, is going to find a suitable solution.