Aquarium LED: What is PAR?

An explanation for photosynthetically active radiation

The abbreviation PAR stands for Photosynthetically Active Radiation. In the wavelength spectrum of the sun, it circumscribes a certain area, which can be used by photosynthetic organisms (such as plants or corals). For standardization and better comparability, the relevant literature defines this as the interval between 400 and 700 nm.

PAR is measurable through the photon flux. In order to determine this and to define a certain value, the photon flux density in micromol per second per square meter (μmol / (m2s) has prevailed as a unit of measurement that describes the radiation within the PAR spectrum that actually arrives in an area of one square meter in one second.

Several studies have been carried through, during which scientists experimented on plants (or parts of plants) to determine which parts of the wavelength spectrum have a particularly positive effect on their photosynthetic activity. For this purpose, the wavelength spectrum was linked to the uptake of CO2. The result is an absorption spectrum in dependence of CO2 fixation.
Relevant studies and efficacy spectra are e. g. McCree (1971 - "The action spectrum, absorbance and quantum yield of photosynthesis in crop plants". Agricultural Meteorology. 9: 191216) or the efficacy spectrum according to the German Industrial Standard DIN 5031.

Interestingly enough, the light spectra differ quite considerably from study to study. This is probably due to the fact that different plant types or parts were used for the experiments, because in principle every plant species has its own individual action spectrum. According to McCree, CO2 fixation maxes in the red spectral range, according to DIN 5031, blue light is more effective. The following graph illustrates an exemplary action spectrum: 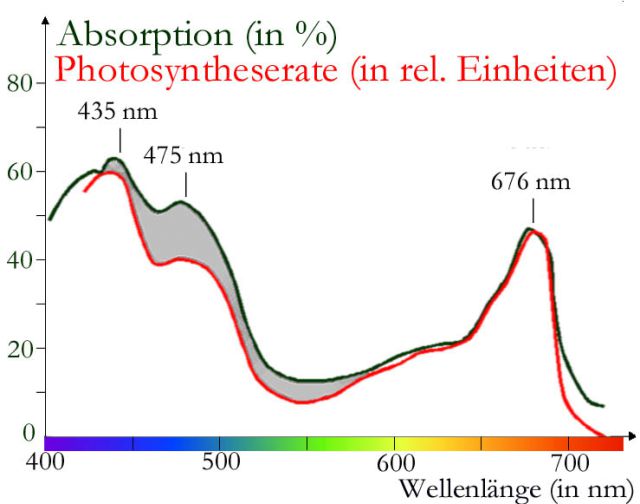 Therefore, if you want to provide light to a wider range of plants, the logical consequence is to summarize the results of the studies to cover the requirements of as many plant species and experimental arrangements as possible. This results in an action spectrum that has its maxima in the red and blue regions. So-called grow lights for plants are often used as artificial growth-promoting light sources for the cultivation of plants in greenhouses. They emit almost only red and blue wavelengths. However, this is primarily about maximum efficiency in terms of crop yield. For the human eye, the coloring of these lights is not suitable as ambient or viewing light, as these lamps produce a pinkish-violet light, which appears very artificial and unnatural.

However, recent studies such as the one titled "Green-light supplementation for enhanced lettuce growth under red- and blue-light-emitting diodes" show that artificial growth light is even more effective when the spectrum also includes the green wave range.

Exploring an optimal spectrum of action ideal for all sorts of plants is particularly difficult due to the peculiarities and preferences of the individual plant species. Exactly which wavelengths are preferred depends primarily on the particular plant species and is additionally influenced by other factors, such as the lamps that are used and the intensity of the light. For example, please consider the following study: "Finding the optimal growth-light spectrum for greenhouse crops".

PAR and the photon flux density are therefore terms that are primarily used in science. In day-to-day freshwater aquarium keeping and aquatic plant cultivation, these units have not really caught on - they have become more established in marine aquatics. For these reasons, in a planted aquarium or aquascape, the lighting of choice is a growth and viewing light ideally based on the daylight spectrum of the sun that emits light in the red, green and blue range.

In order to evaluate and compare aquarium lights with regard to their influence on the photosynthetic performance of aquatic plants, it is still more advisable to use the unit lumen (luminous flux) instead of PAR expressed by the photon flux density. Simply not enough PAR data are provided by the manufacturers of aquarium lamps, and scientific findings on PAR values of aquatic plants in freshwater are scarce.

Our express thanks go out to Robert Miehle-Huang for his expertise and advice on this topic.