Getting rid of duckweed

Duckweed is a family of very small floating plants that occur almost all over the world in stagnant or slow-moving bodies of fresh water. Duckweed usually gets into aquaria unintentionally. Most species have a rapid growth rate when conditions are right, and are easily introduced into new habitats. This noteworthy group of species forms the subfamily Lemnoideae in the Araceae family.
Most aquarium hobbyists will encounter species of the genus Lemna in their tanks, not just the most frequently mentioned Lemna minor, but also many other, mostly tropical species. Some of them might be the Lemna-esque-looking dotted duckweed (Landoltia punctata). Other genera belonging to the duckweed family are Spirodela, Wolffia (the smallest flowering plant in the world!) and Wolffiella. 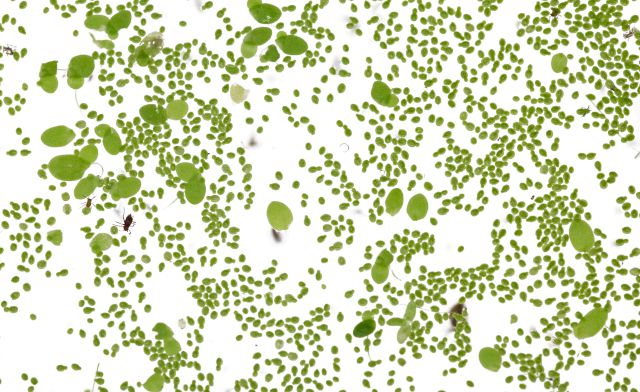 Wolffia- and Lemna - a comparison of size

The duckweeds have their justification, though, especially in biotope and breeding aquaria, where floating plants make a lot of sense. However, planted tank keepers regard them as a pest due to the high growth rate and the resulting strong shade they cast on the submerged plants. It is not easy to get completely rid of duckweed, especially Lemna and Wolffia. Here's how to best handle this.

Since even a single small duckweed plant is sufficient to trigger the formation of a population, caution should be exercised especially when buying new aquatic plants
Only In-Vitro plants are guaranteed to be 100% free from duckweed. For all other forms of cultivation - pot, bundle, single plant, portion or pad - the seller cannot completely rule out duckweed on the plants, because they may have already come into contact with duckweed in the nursery. Of course, this also applies to plants bought from hobbyists. Therefore, one should examine the plants thoroughly prior to planting, and rinse them under running water to remove any duckweed. During the first days after setting up a new tank, you should regularly scan the water surface for emerging pieces of duckweed and remove them immediately. In most cases, these precautions are sufficient and will prevent the duckweed from taking over the tank. . 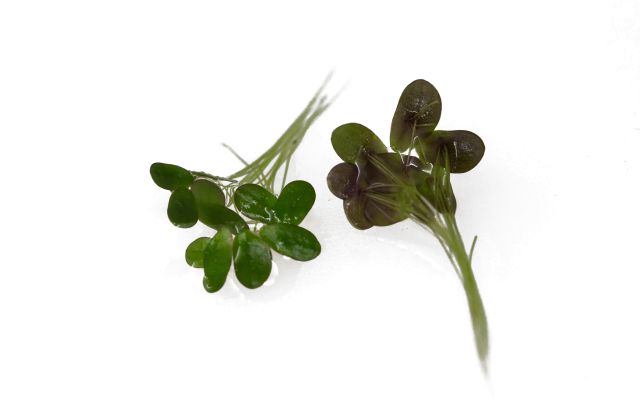 The red-colored underside of the thalli of Landoltia punctata is rather pretty to look at.

There are, in fact, some fish that feed on duckweed, like, for example, the gouramis of the genus Trichogaster. These fish can therefore be quite helpful in containing a duckweed infestation. Of course, they have certain requirements regarding the size of the aquarium and the water quality, which must be considered. Therefore, a purchase of these quite large fish should be well-considered in order to ensure species-appropriate keeping.

Quite an unusual countermeasure recommended on various Internet forums and blogs is the targeted use of aphids. These insects suck plant sap, reproduce in large numbers, and are said to kill the duckweed in this process. When the duckweed disappears, the aphid population is expected to decline automatically.
Whether or not this method works and is practicable, we cant really say. Presumably, only certain species such as the water lily aphid (Rhopalosiphum nymphaeae) can live on duckweed, though. When you try this, please make sure that the aquarium has no other floating plants and aquatic plants with surface contact because the aphids will attack those, too!

To deal with a duckweed infestation that is already manifest, it is easiest to manually remove the thalli until the last of them are gone. To do this, first scoop up big parts of the duckweed cover with a larger container. If only fragments and individual plantlets remain, proceed with a fish net.
Duckweed often sticks to objects protruding from the water, such as technical equipment, tubing or hardscape such as driftwood. Take extra caution to detect stray duckweed leaves especially on these interfaces.

To effectively get rid of all the duckweed, youll have to remove all the technical equipment protruding from the water surface, and clean it outside of the tank. You can use the fact that duckweed also often sticks to the aquarium glass to your advantage: just lower the water level. A large part of the duckweed will stick to the glass, from where it can easily be wiped off with a paper towel. Protruding hardscape is a bit harder to clean since its usually firmly installed. Wood covered in moss is a problem of a whole different league since duckweed often gets entangled in the fronds of the moss, where it can and will keep growing. In this case, the only cure is to pick off the pieces of duckweed one by one with a pair of tweezers. 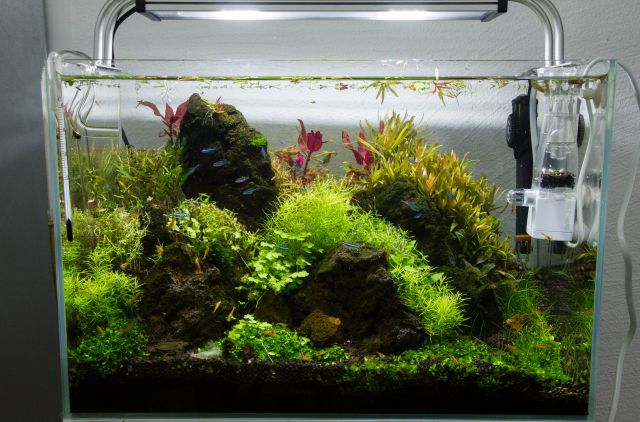 A good tool for collecting single free floating duckweed leaves is a small skimmer described in the article "Effectively remove plant clippings". A skimmer sucks small floating particles such as duckweed or small plant clippings off the surface in no time. However, its capacity is limited, this should be kept in mind.

Once all visible duckweed has been collected, the procedure is basically the same as described in the section "Preventive Measures". Close observation of the aquarium over the next one to two weeks is highly recommendable. Prophylactically, you can keep the skimmer running during this period. If you spot fresh duckweed plants, remove them immediately. Although this is a tiring and time-consuming measure, it will be successful  if you follow through.