Aquascaping with the golden ratio

Basically, a line is divided according to the following rule: The ratio of the larger line segment (a) to the total line (a + b) is equal to the ratio of the smaller line segment (b) to the larger one (a). You can see that graph in our header picture. If you put that concept in numbers, you'll get a (golden) ratio of about 1:1.618. Typical image formats, such as for photos or monitors, are also roughly based on the golden ratio (for example: 4:3, or the widescreen format 16:9). 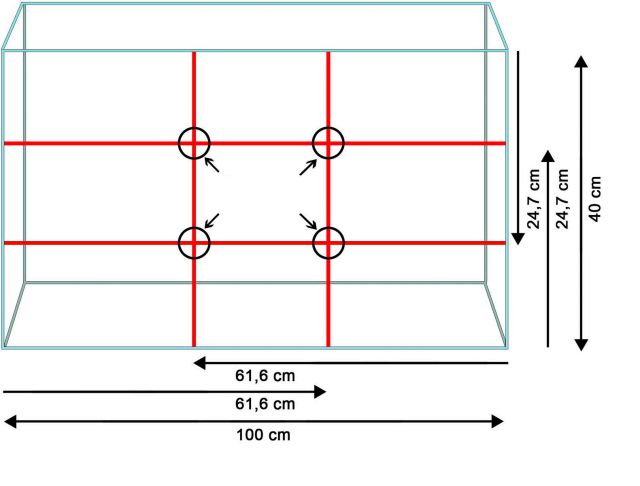 If you define the front glass of any aquarium as a screen, you can divide it in adherence to the rules of the golden ratio. This gives us four imaginary lines, which divide the total area into nine smaller areas. At the points where two lines intersect, eye-catchers like especially beautiful aquatic plants or optically especially remarkable hardscape such as stones and driftwood can be placed.

The rule of thirds

Basically the so-called rule of thirds is a mathematically simplified interpretation of the golden ratio. It is often used in photography. The picture is mentally divided into nine segments, by drawing two imaginary horizontal and vertical lines, so that all segments have the same size, which they wouldn't, with the "proper" golden ratio. Every single line is thus divided exactly into thirds (hence the name). The following example shows a "rule of thirds" grid placed over an aquarium layout. You can see how the sand path separates the structures on the left and on the right. A 100% symmetrical separation would look very artificial, and it would add a lot of weight to the center. The sand path does not cross the left vertical line exactly, but a general separation ratio of ⅓ to ⅔ is evident. 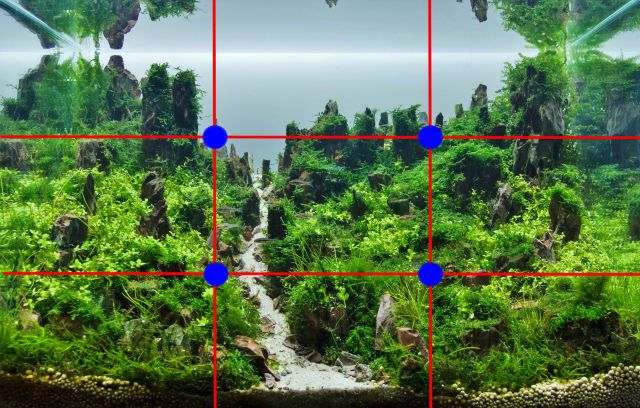 Originator of the rule-of-thirds picture: Wiki-user Sub via Wikimedia Commons, Public Domain. Superimposed over an aquascape by Aram Schneider.

The golden spiral is another useful aid in image design also based on the golden section. Its shape can be approximated by successive quarter circles, which rotate at 90° and get smaller by a certain factor with each iteration. This results in a particularly harmonious-looking spiraling shape, reminiscent of a snails shell. If you orient yourself with the help of this curved form, objects and focal points can be placed in a unique way in a picture and it helps in reviewing your compositions. Due to its special shape, the outcome is a bit more dynamic than with the classic grid of the golden ratio or the rule of thirds. Of course you can also rotate or mirror the golden spiral to experiment with this option. 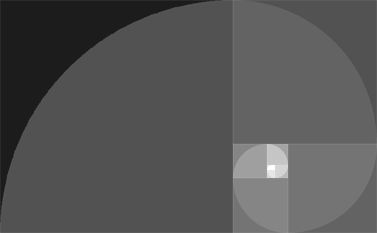 In the following aquarium layout, we used the golden spiral to check the harmony and the lines of the composition. It is evident that the arc formed by the driftwood and its structure follows the outer line of the golden spiral. The thicker pieces of driftwood in the foreground of the right hardscape construct create a focal point, meeting the inner lines of the spiral.

Originator of the picture of the golden spiral: Icey via Wikimedia Commons, Public Domain. Superimposed over an aquascape by Aram Schneider.

When composing a picture or creating an aquarium layout, you can use the golden ratio grid, the rule of thirds or the golden spiral to divide and define the spaces in your aquarium. Above all, these methods help you avoid strong symmetries that would make your aquascape look unnatural, artificial, or simply boring and static. When composed according to the rules of the golden ratio, a picture will appear much more natural because the composition looks less harsh, or, to put it bluntly, looks a bit more crooked and wonky, and thus more natural.

Focal points, in other words: elements that catch the attention of the onlooker, are often placed at intersecting lines when the rule of thirds or the golden ratio are used. With the golden spiral, the ever-smaller tail of the spiral points to an area that offers itself to the placement of a focal point. In an aquarium you can use especially beautiful aquatic plants or hardscape elements like particularly dramatic-looking pieces of driftwood or stones.