Short green algae in the aquarium

In order to get answers to basic questions all around algae in the aquarium, we recommend you read this article first.

The term "fuzz algae" describes short green algae growing as individual filaments on plants, the decoration and even the aquarium glass. They are easily confused with hair algae. Those, however, do not grow in individual filaments but form a dense coat on objects. The filaments grow much more densely than those of fuzz algae. It is still unclear whether fuzz algae are an early growth stage of a hair algae species, though.

Fuzz algae are a clear sign of an imbalance in a young ecological system. They are frequently found in aquaria that have been existing for a short time only, approximately during weeks 4 through 8. A sudden outbreak of fuzz algae in an older set-up is often caused by imbalances of the macronutrients (NPK). A permanent but slight population of fuzz algae is quite normal and no reason for concern.

Optimising the nutrient supply leads to improved plant growth. Fuzz algae are then easily outcompeted. Aquatic plants rely on a balanced nutrient supply. Which conditions and nutrients they need in the aquarium has been laid down in this article about aquarium basics. Quite frequently, fuzz algae appear when there is a carbon deficiency (remedied by adding CO2) and a deficiency of macronutrients (NPK). Please look up the target values for these nutrients in the following list:

The algae should face competition by a sufficiently large, healthy, fast-growing aquatic plants. Given that the nutrient supply is well-balanced, adding more plants can be helpful to fight fuzz algae. 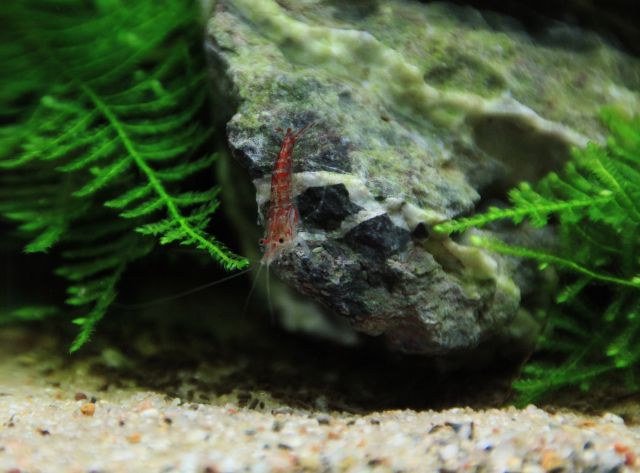 As fuzz algae attach themselves to the substrate very stubbornly, they are difficult to remove manually. Those that grow on the aquarium glass can easily be scraped off with a blade cleaner.

When the aquarium is severely infested with fuzz algae, treat with Easy Carbo, combined with a sufficient number of shrimp.