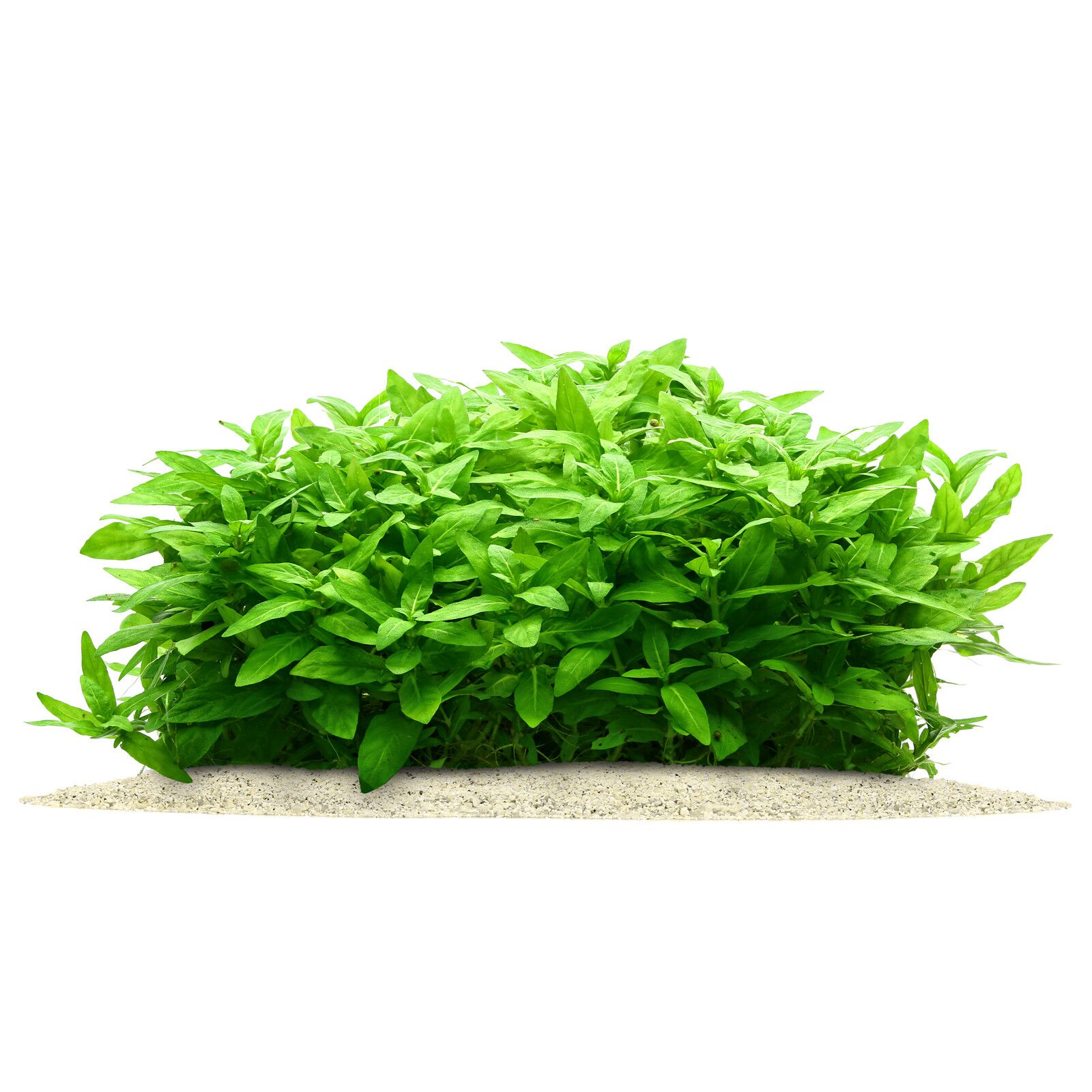 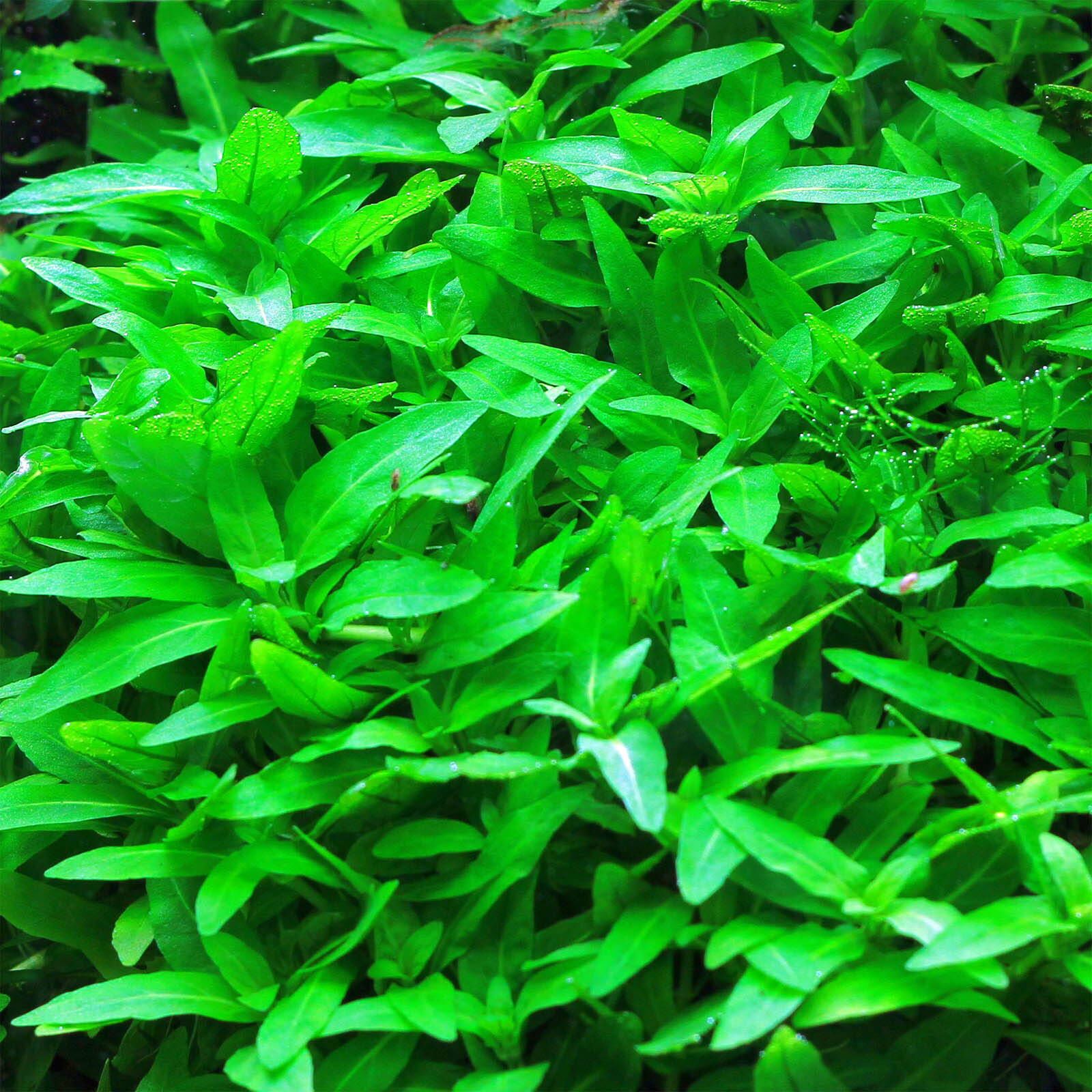 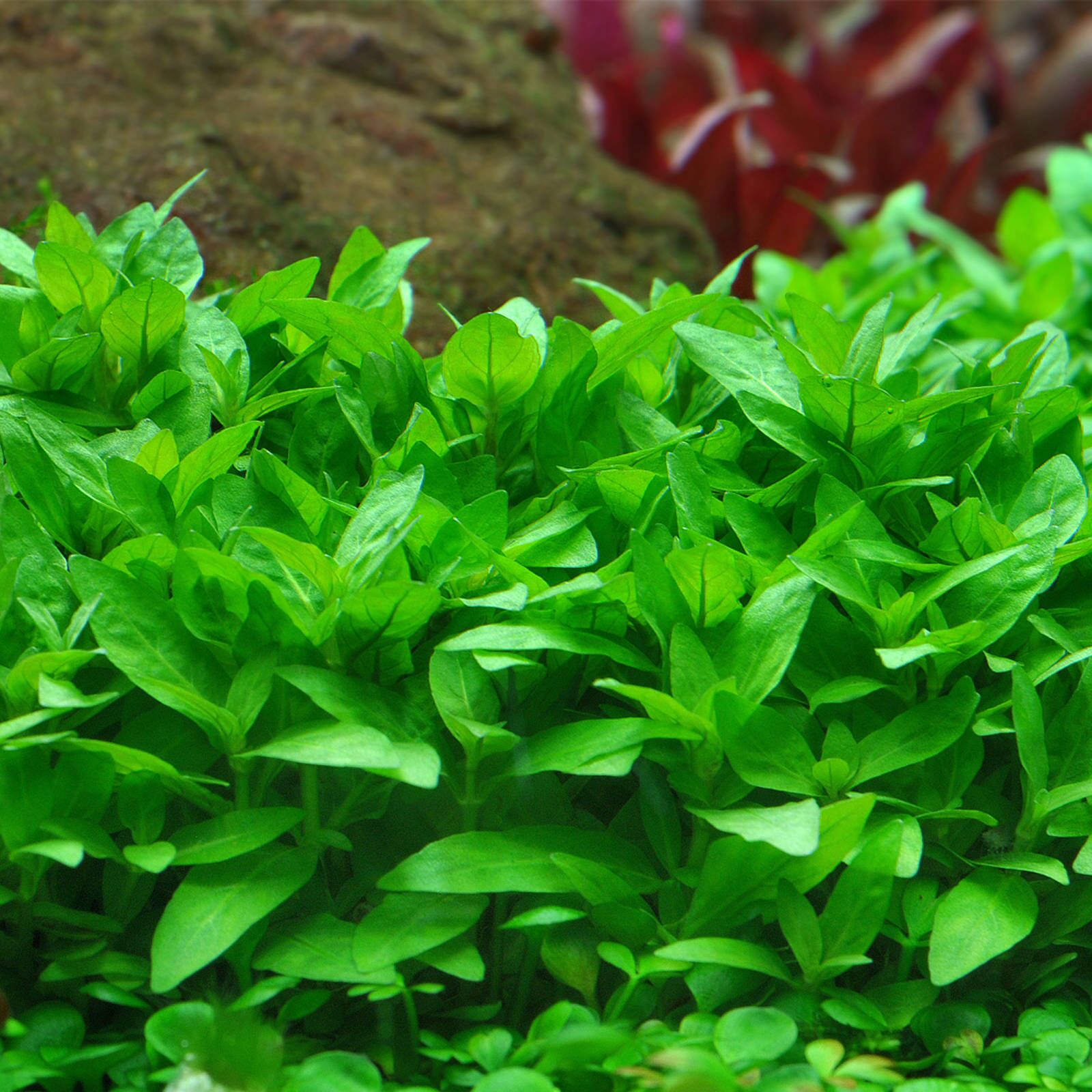 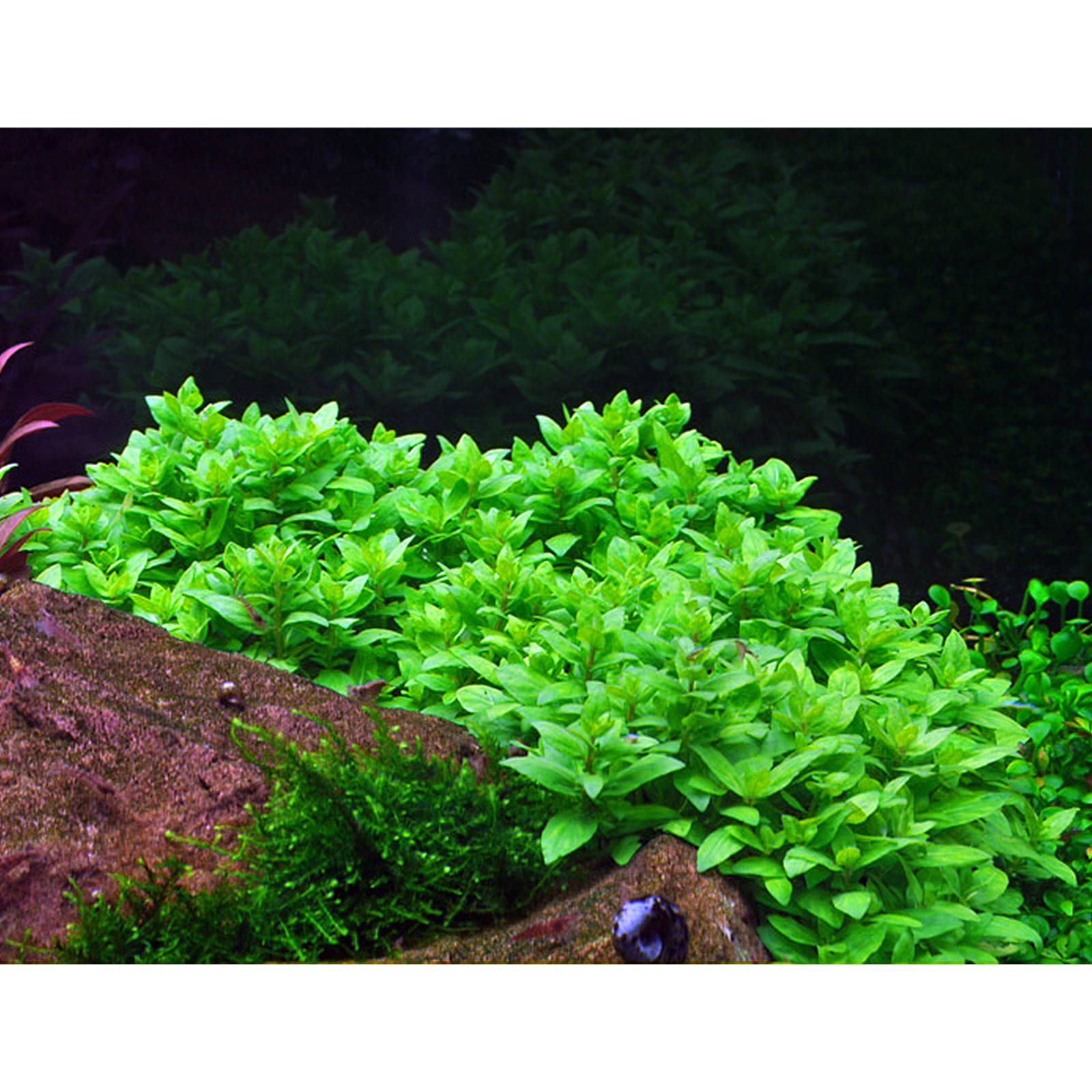 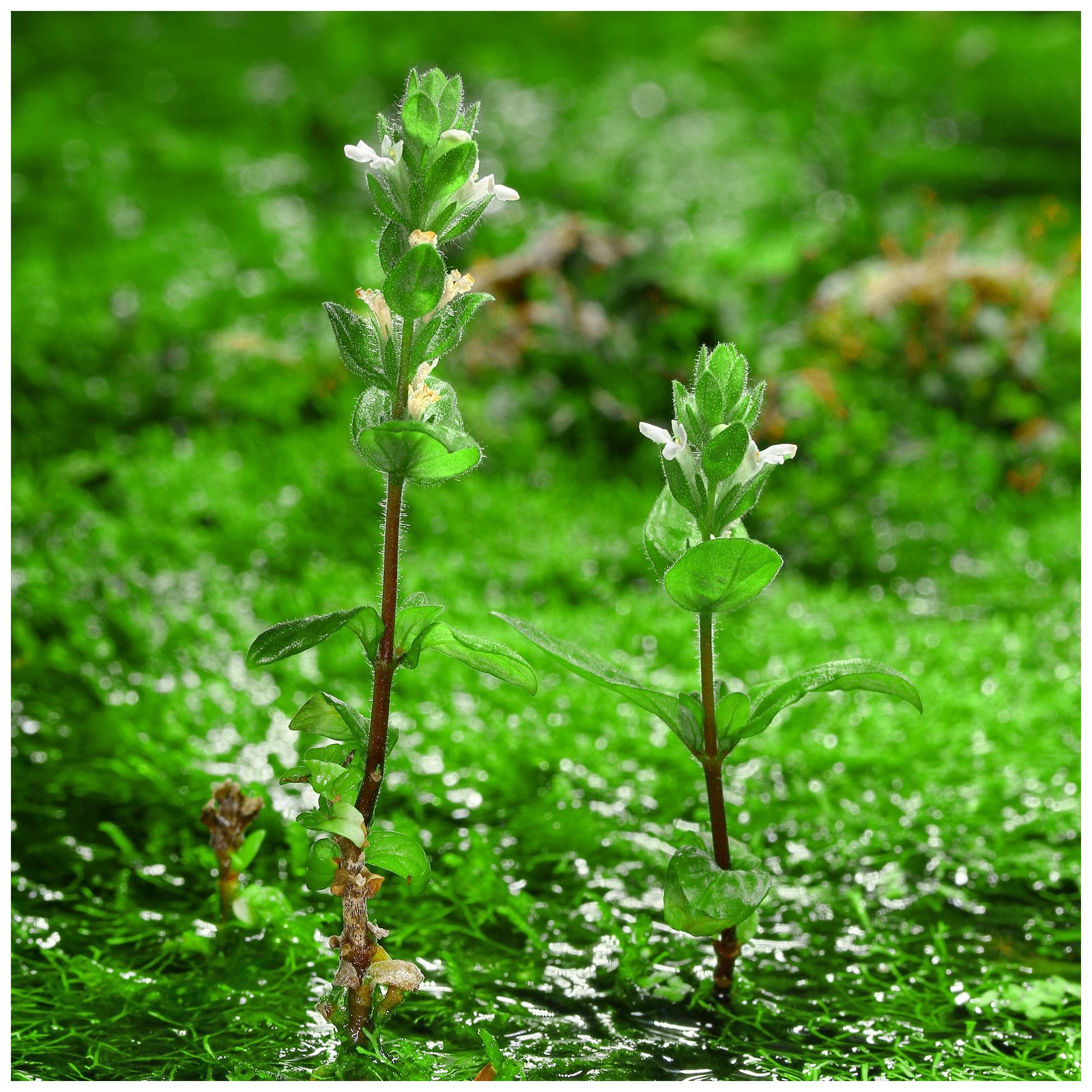 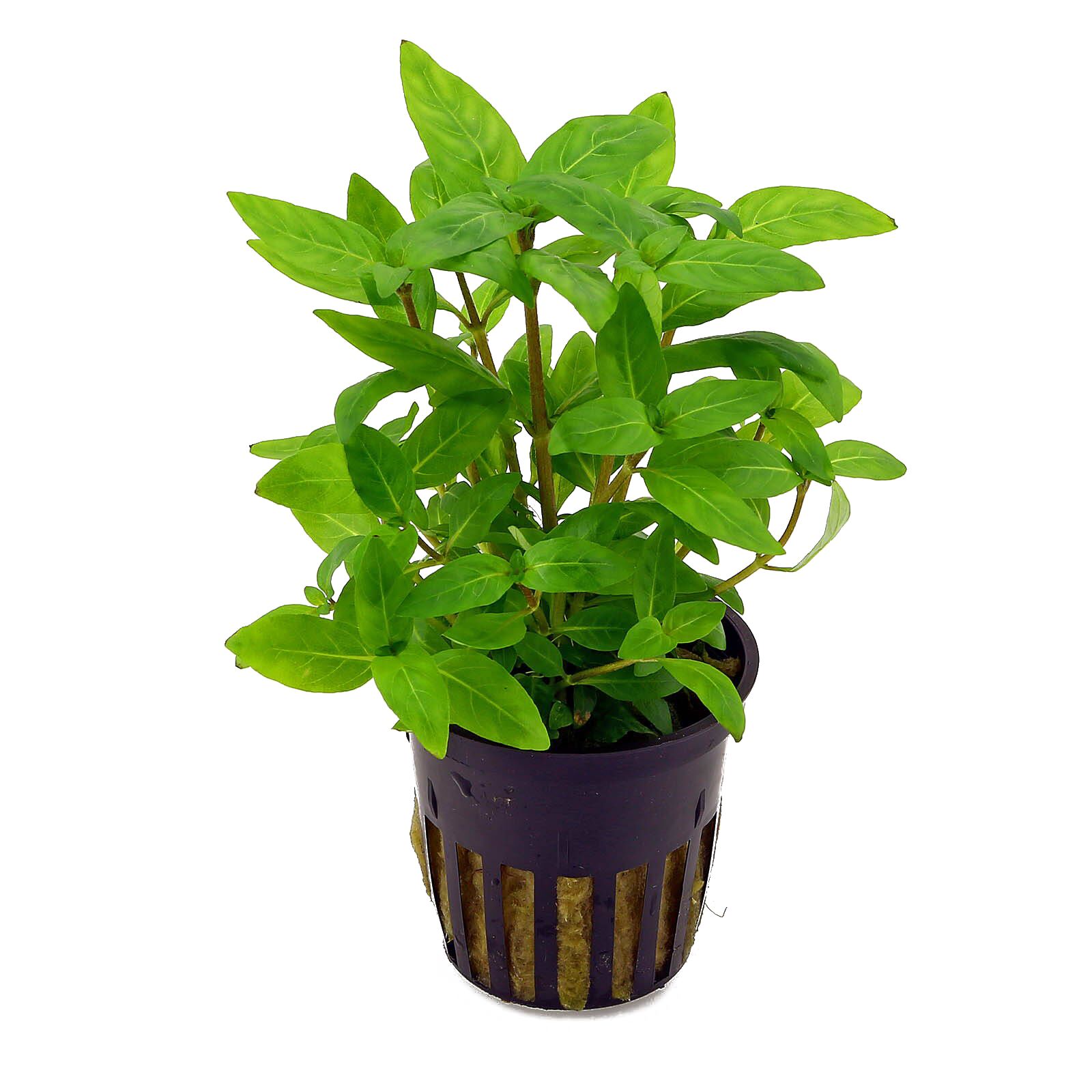 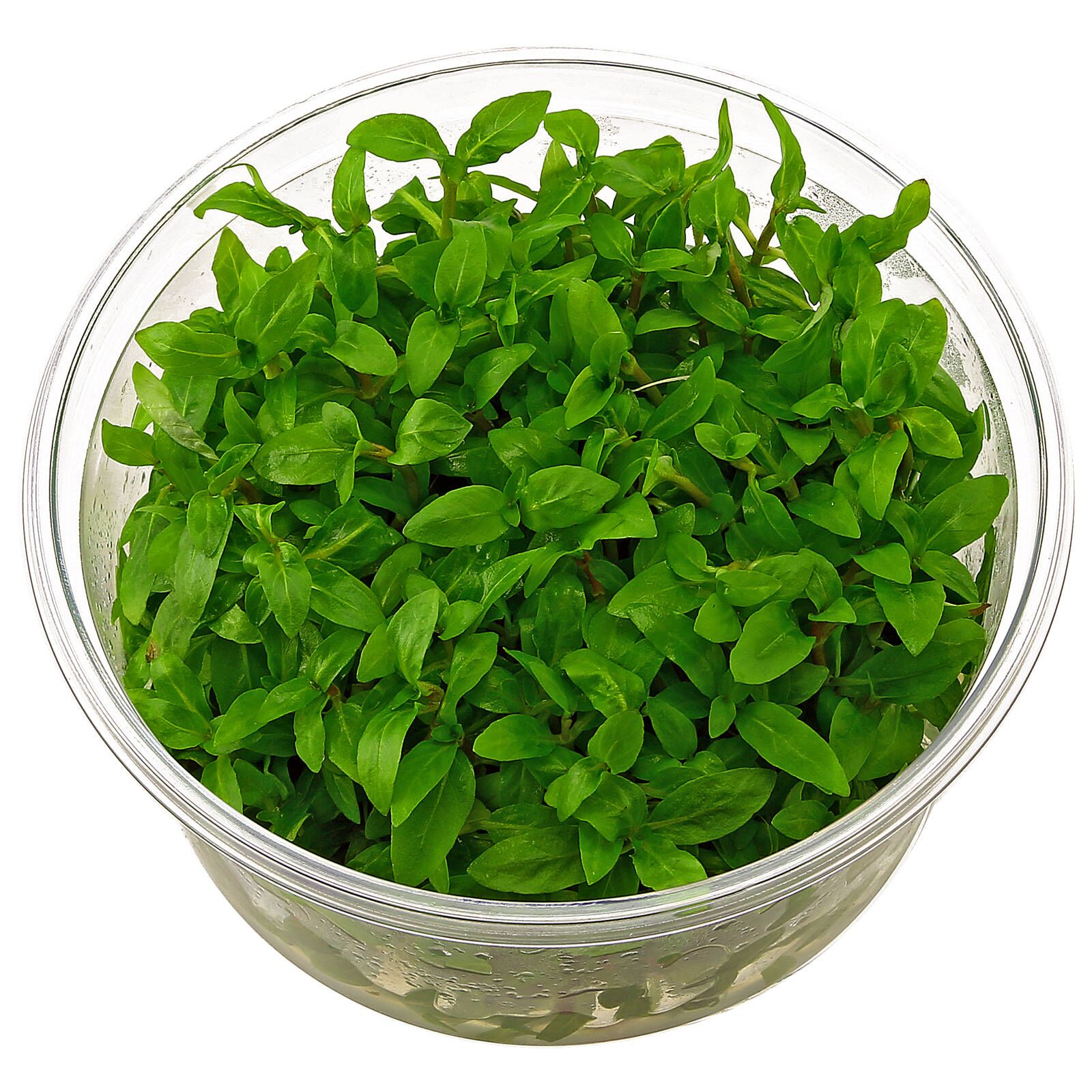 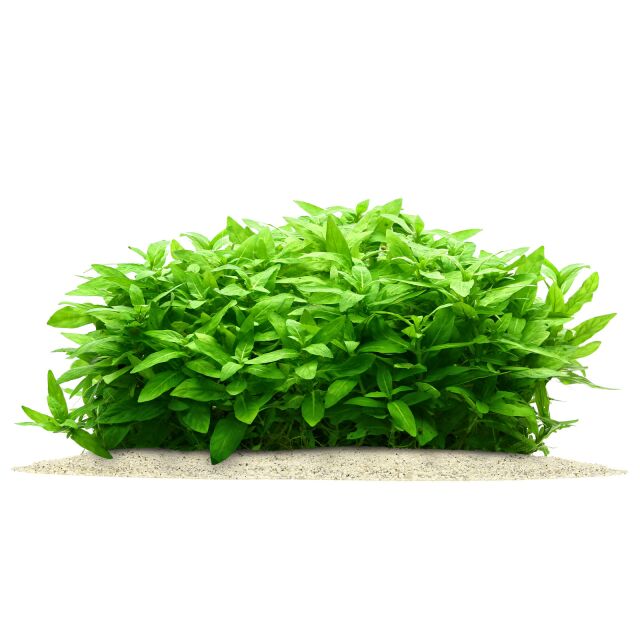 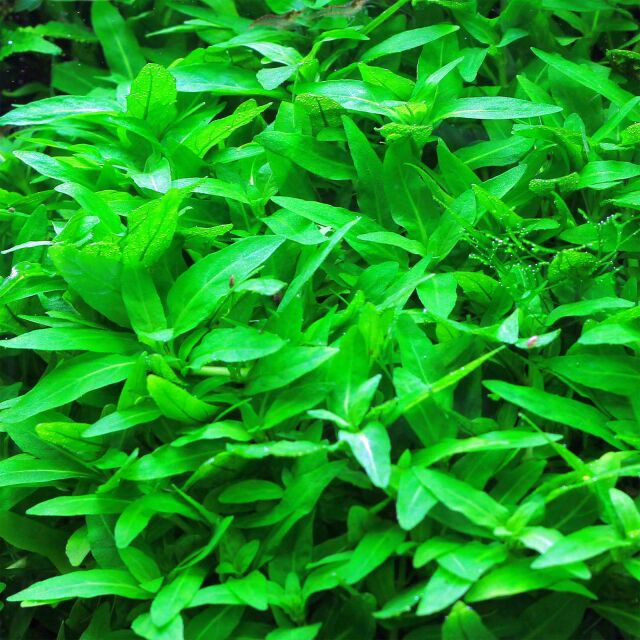 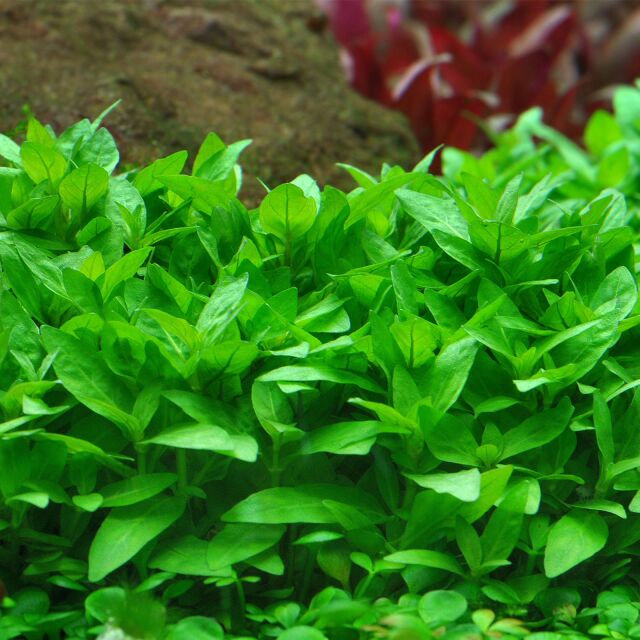 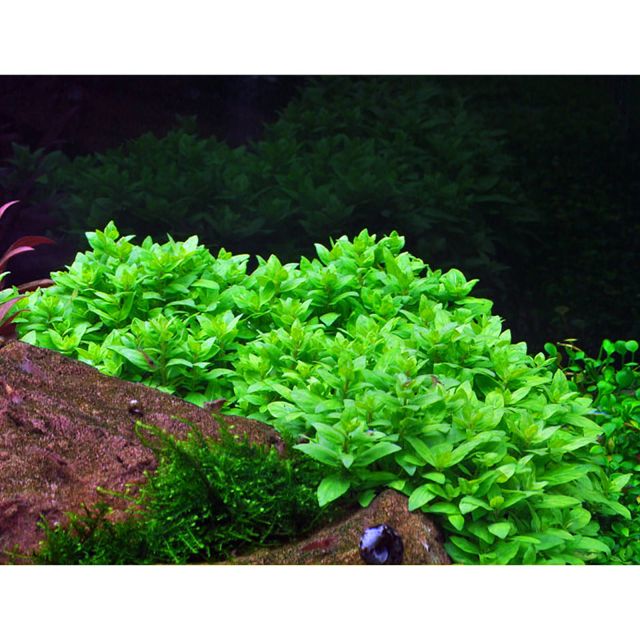 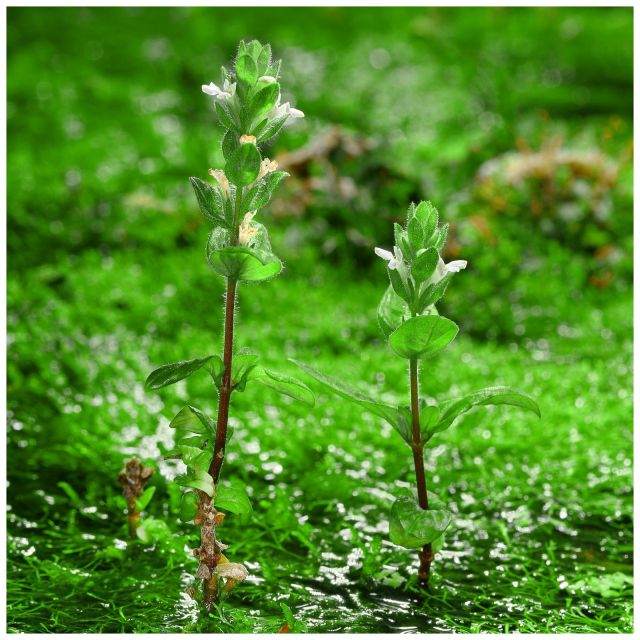 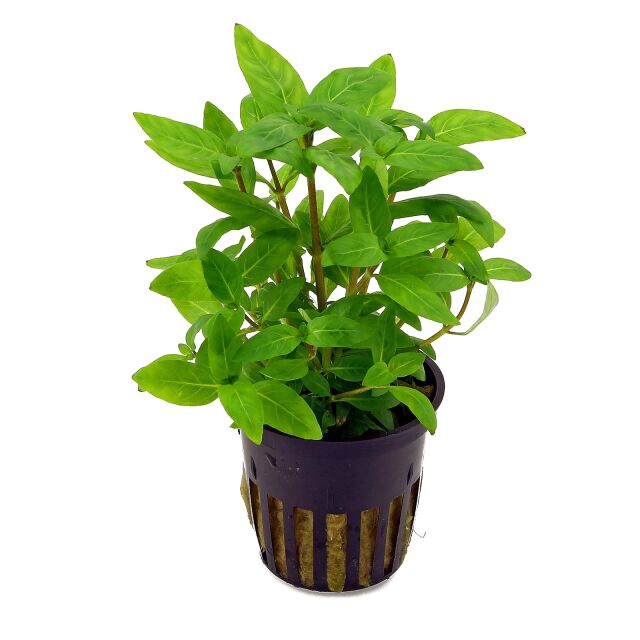 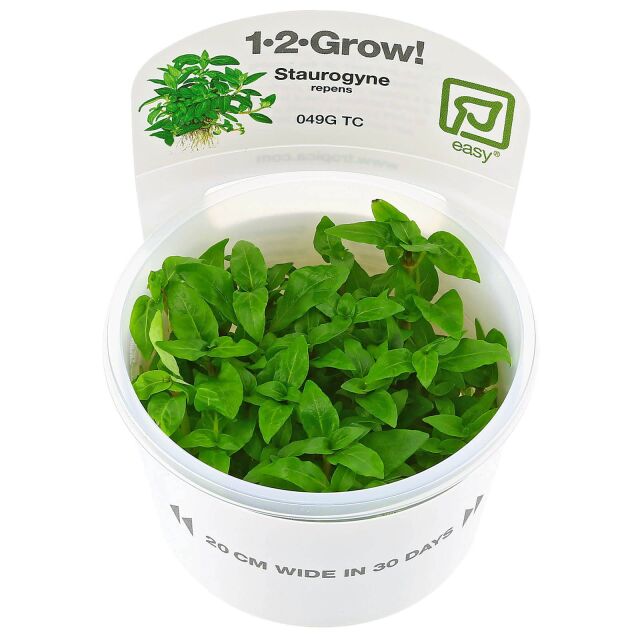 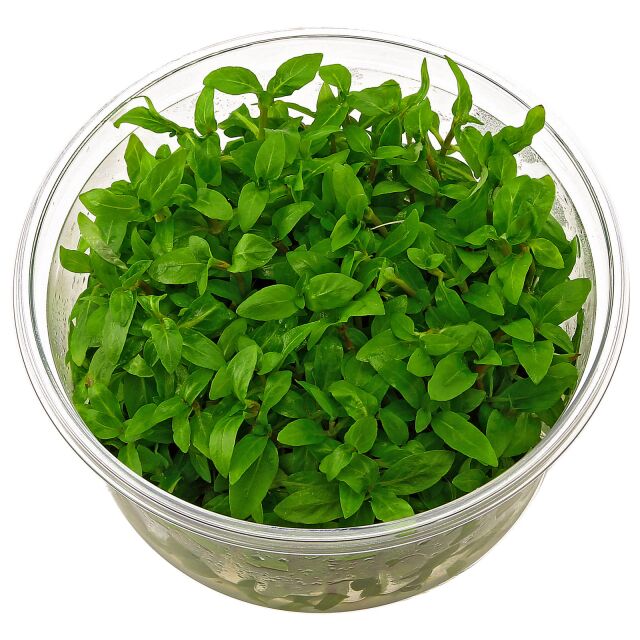 (74 ratings)
Out of stock
As a registered customer you can get notified via e-mail when that product is back in stock.

Sign in or Register
Free shipping on orders over € 50.- within Germany Change region
Express delivery possible
1-3 business days - order today and well deliver next week on Tuesday at the earliest
I want to order to  confirm
Description Video Characteristics How many plants do I need? General information Customer reviews

Staurogyne repens is a light green compact strong plant for the aquarium foreground originating from Rio Cristalino in Brazil. It can be used as ground-covering plant or as low cushion-like bush. Forms well through trimming. It is effective for setting accents in crevices and gaps in the hardscape. If you get a plant with long stems from emerged cultivation you ought to cut them off, cut them into several parts and plant them into the substrate, keeping a small distance. The lateral shoots that form in this case will grow more or less horizontally along the substrate. A lot of light (at least 0.5 W/litre) and a good CO2 and nutrient supply are recommendable. 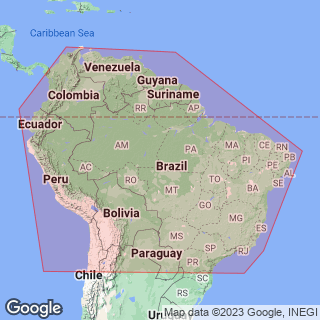 This plant was hitherto known as Staurogyne spec., or Staurogyne sp. "Rio Cristalino". However, in 2010, Dr. Dieter C. Wasshausen (Smithsonian Institution, Washington) identified flowering plants herbarised by Christel Kasselmann as Staurogyne repens (Nees) Kuntze [1].
The aquarium population of this species originates from Rio Cristalino in the Brazilian federal state Mato Grosso. The plant were found growing on and between rocks on the bank of the fast-flowing river, mainly above the waterline, and in full sun. [1],[2]. In May 2008, Staurogyne repens was presented as new aquarium plant (back then as Staurogyne spec.) during the Interzoo trade fair by Tropica.

This plant was hitherto known as Staurogyne spec., or Staurogyne sp. "Rio Cristalino". However, in 2010, Dr. Dieter C. Wasshausen (Smithsonian Institution, Washington) identified flowering plants herbarised by Christel Kasselmann as Staurogyne repens (Nees) Kuntze [1].
The aquarium population of this species originates from Rio Cristalino in the Brazilian federal state Mato Grosso. The plant were found growing on and between rocks on the bank of the fast-flowing river, mainly above the waterline, and in full sun. [1],[2]. In May 2008, Staurogyne repens was presented as new aquarium plant (back then as Staurogyne spec.) during the Interzoo trade fair by Tropica.

Recently, this plant has also been offered erroneously as Staurogyne sp. 'Porto Velho'. However, 'Porto Velho' (see the respective data sheet) is definitely another Staurogyne form, hitherto only rarely cultivated in Europe. Staurogyne repens isn't identical with Staurogyne sp. 'Low Grow', either. The latter has not been fully identified yet. It is well-known in the US but might not even be in cultivation in Europe yet. Its leaf form is more longish than that of S. repens, and its grows distinctly larger than both S. repens and S. sp. 'Porto Velho' when cultivated under the same conditions.

Staurogyne repens proved to be an excellent, moderately demanding, highly versatile aquarium plant shortly after its introduction. It forms carpets to dense bushes and has become an often-used plant in aquascaping. It is a relatively slow grower but is produced in large numbers by in vitro propagation for trade. It is also well-available from fellow hobbyists.

The stems of the emersed form of S. repens are of a reddish-brown colour, densely hirsute and solid. Those of the submersed form are mainly green and have only a few hairs. The shoots may grow in a creeping habit or upright, and ramify strongly. The alternate leaves look quite similar to those of Hygrophila polysperma. Their emersed form is of a medium green, their submersed one of a light to yellowish green colour. The leaf form may vary greatly on a singular plant - ovate, oval or lanceolate. The sumbersed leaves can grow to a length of up to 4.5 cm and to a width of shortly over 1 cm.

Rather strong light, the addition of CO2, and soft to medium hard water are recommendable, as are temperatures between 20 and 30 °C and a substrate rich in nutrients, where the plant can develop a dense root system. Under too low light, the plant tends to etiolate, i.e. the stems form longer internodes and develop a rather upright growth habit.
Emersed cultivation is rather easy on a moist substrate, and under lots of light and in warm temperatures S. repens soon forms flowers with densely hirsute bracts and white flowers.
Staurogyne repens is usually sold in its emersed form with both upright and creeping stems. In order to further low, carpet-like, creeping growth, cut all long, upright stems to a height of maximal 5 cm before planting. You can use the cut-off stems to propagate the plant by making head and partial cuttings, which can be planted in the substrate at short distances.

Staurogyne repens can be formed well by trimming, and its compact growth and its solid stems ramifying at the base make it look like a spreading shrub.
Newly planted shoots mainly grow creeping and carpet-likein the beginnning, however, they might also form upright stems, especially if the group grows denser over time. Should you wish for your Staurogyne to keep growing low and carpet-like, cut out these longer stems selectively. This method also furthers ramification. However, it is also possible to trim the entire group if it has grown higher than originally desired. The plant will throw many lateral shoots from the remaining leafless stem stumps.
However, if you want it to form a higher, dense bush, you can just let the upright stems grow. This bush can be trimmed like a hedge as desired.

S. repens is a great carpet plant, covering the ground with light green, relatively large leaves, or forming low-growing wide bushes in the fore- and middleground, and is a good neighbouring plant for other low-growing plants contrasting in texture and colour.
It shows its full aquascaping potential when combined with corresponding hardscape, like e.g. in Iwagumi-style layouts. It is ideally suited for closing gaps between large rocks with a fresh green plant carpet, or to form a bush leaning on rocks or driftwood. S. repens literally nestles into the crevices of rock formations or creeps downward from higher places, which reminds the onlooker of the growth habit of cushion plants in the mountains. Its suitability is possible due to the fact that this is exactly its natural growth habit in the rocks on Brazilian riverbanks.

This item has been rated 4.9 out of 5 stars
74 Reviews
Please sign in if you want to write a review. Sign in
Peter K.
My favorite carpeting plant

This is one of the plants you can use for making a low carpet in front of your tank and you dont need CO2 nor strong lightning. (read more)

This is one of the plants you can use for making a low carpet in front of your tank and you dont need CO2 nor strong lightning. I love it because even if its not so impressive as in high-tech tanks, it still looks very nice in my low-tech tank. You just need to give nutrient tabs to substrate. I recommend this plant if other carpeting plants dont wont to grow in your tank.

Very fast shipment to Italy and plant in excellent conditions. Very careful instructions for the treatment of the plants. Very recommended shop. Super!!!

That was a very good and big Dosage,with a good price tag too. Recommend this version and i will buy more (read more)

That was a very good and big Dosage,with a good price tag too.

Recommend this version and i will buy more